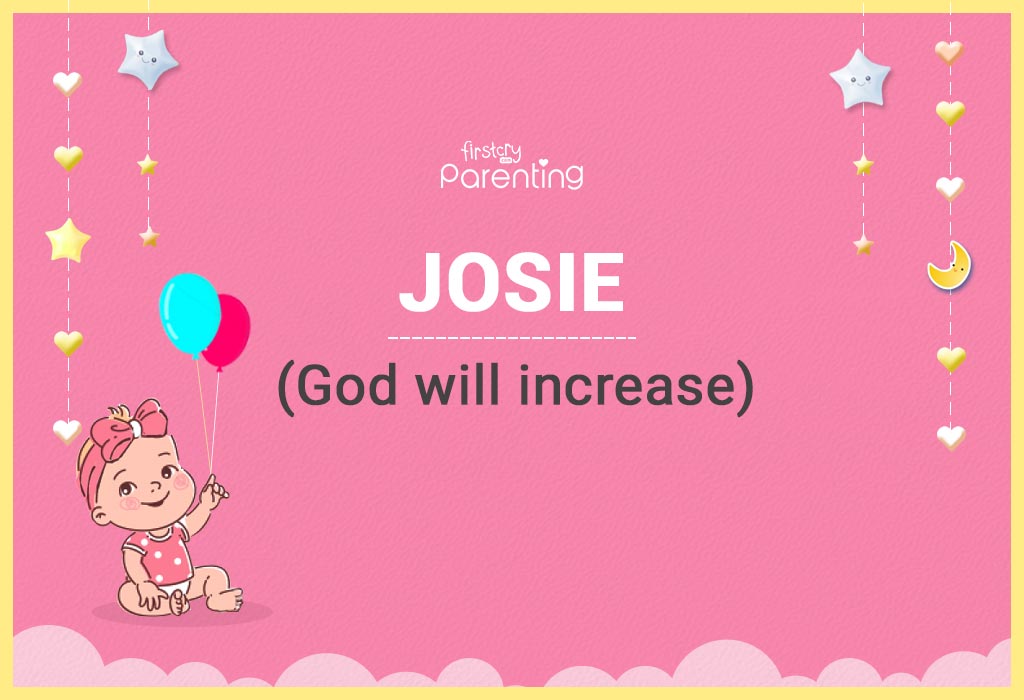 Primarily a diminutive of Josephine, Josie is an English name that means ‘God will increase’ or “God will add” or Jehovah will increase. The meaning of Josie is thus “increase kindness and intelligence” rather than “increase volume mid-tantrum.” As Joseph was the favored 11th son of Jacob in the Book of Genesis, this name makes sense. Josie was a hot name in the 19th century but fell out of favor during the next 100 years. With old-fashioned names trending, Josie will make a comeback in the current trend of names for baby girls. Models Josie Maran and Josie Canseco have contributed to the popularity of the name and brought it back on trend.

What Does Josie Mean?

Derived from Hebrew origin, the meaning of Josie is “Jehovah increases.” It can be a feminine version of Joseph or John, as the meaning of Josie can imbibe deep religious feelings and works well for Christian parents who would always count the blessings bestowed upon them by God.

Traditionally a name was given to a baby girl; Josie may originate from the Hebrew Yosef, meaning “God will give” via the Greek Iosephos and the Latin Iosephus. Commonly found in America today, Josie is a common choice of name in Taiwan, Vietnam, and English-speaking countries. In French and Hebrew, it means ‘may Jehovah add,’ ‘Yahweh will add,’ and ‘God is gracious. Josie is a fitting translation as Joseph was the eleventh son of Israel as mentioned in the Book of Genesis, Bible.

The other spellings for Josie may appear different according to their linguistic or country of origin. Here are some of the Josie name variations that might appear unique as an alternate form of the given name:

How Popular Is the Name Josie?

Josie has been on the social security list since records have been kept. However, the Josie popularity index has been up and down on the popularity charts, peaking in 1910. According to Social Security Administration data, the Josie baby name ranking has rapidly climbed up in the past two decades. Starting at 328 in 2000, Josie managed to break the top 200 for the first time in 2017 and top 140 for the first time in 2020. It ranks at 144th spot as per the latest 2022 popularity index. In recent times, Josie has gained immense popularity due to the all-girl pop band comic, series, and movie Josie and the Pussycats. Other notable namesakes include actress Josie Rebecca Davis, actress Josie Loren Lopez, and actress Josie Totah. Josie has also been appreciated in pop culture due to the presence of its character in Walker, Texas Ranger. Twin Peaks, Anne of Green Gables, and EastEnders.

A consistent search value of over 40 has been recorded on interest for the name Josie reaching 100 in Jan 2015. The lowest recorded value was 42 on Oct 2021 on the popularity scale.

Interest in Josie- the US

Popularity of the Name Caroline

As per the global trends, Josie has been searched the most in Cote’d’l voire. Peru, Ghana, the United Kingdom, and the United States following close behind to reach the top five positions in the popularity index. With 44% of the total population in 2020 belonging to the Christian faith, Josie, as a Hebrew name, has been greatly appreciated in Cote, ’d’l voire.

Search Trends of Josie – US

New Jersey has recorded the highest search value of 100 in the last ten years among the metro cities in the US. Illinois, Pennsylvania, Connecticut, and Minnesota have made it to the top five positions where search trends for Josie have been recorded as the highest.

Middle Names That Go With Josie

Keeping middle names has become popular and is an accepted part of many cultures that may get special attention more than the given name. Here are some double names with Josie that may sound meaningful, unique, and different:

Popular personalities named Josie may significantly influence both parents and children. These successful people can leave an indelible impression on the people and their lives. Here are some names of famous celebrities named Josie who can inspire children from their struggles, passion, and excellent reputation.

Baby-names like Josie may be connected via style, image, meaning, or origin. Apart from preserving family honor and creating a social identity, family names for Josie can help identify people and distinguish one family from the other. Here are some other names for Josie that have a wide range of well-used alternative baby names:

Rhyming names for Josie can be formed by repetition of similar sounds in the final stressed syllables and any following syllables of two or more words. Here are some names that rhyme with Josie to produce lyrically cute and sweet words that are soothing to hear:

Sibling names that go with Josie can reflect the bond of love between them and strengthen ties within the family. Names for a sib-set can have the same initial letter, related to a theme or co-ordinated in style. Here are some suggestions for suitable sister names for Josie and suitable brother names for Josie that can strike a balance of coordination between them:

Nicknames given to Josie can add new depth to your relationship with your child and are often intertwined with the values of a particular family. Here are some of the best short and straightforward nicknames for Josie that often uphold the specific behavior or can be considered as per the traits, hobbies, or interests of a child:

Steeped in elegance, a vintage name like Josie can sound extremely jaunty and friendly enough to win the hearts of parents. Widely used over the years, this independently used given name has a beautiful attribute in its meaning that always carries hope and is worth considering for your little darling.