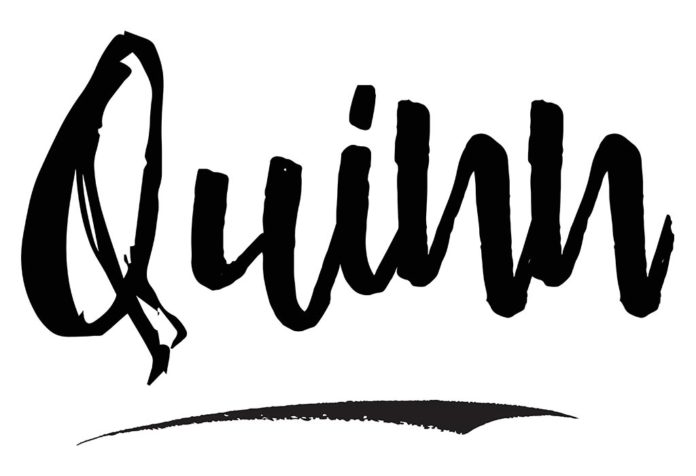 Although it started as a masculine first name, Quinn has evolved to a gender-neutral English variation of the famous Irish patronymic surname Ó Cuinn and McQuinn, which referred to the “descendant of Conn.” It could also have come from the forename “Conn,” which comes from Old Irish ‘cond,’ meaning “intellect” or “wise,” or ‘cenn,’ meaning “chief.” So, “wise” or “counsel” are other potential derivations of the name.

What Does Quinn Mean?

Quinn is an Irish surname derived from the older Gaelic O’Cuinn, meaning “descendant of Conn.” Conn is a traditional Irish forename that means “chief” or “leader.” Quinn may also have come from Irish-Gaelic ‘Ceann,’ which means “sense” or “intelligence.” In its Latin origin, the meaning of Quinn is “a girl who is as pretty as two,” while the meaning of Quinn in Greek is “fifth born” or “queen.”

Quinn is a short one-syllable sweetheart derived from the Irish surname that checks off many boxes regarding baby name trends of today. Historically, the O’Cuinn clan served as quartermasters (supplying arms and provisions) to the kings of Ulster of Ireland for over four centuries. Although initially, Quinn was freely used on both genders in the United States, it gained greater acceptance as a name for baby girls.

Quinn name variations are substitutes with a modern twist on more traditional takes. Here are some other spellings for Quinn that differ from one country of origin to the other:

How Popular Is the Name Quinn?

Although it began as a boy’s name in 1960, it remained at a low-moderate level of usage until debuting on the charts in 1995 as a girl’s name. In 2010, Quinn outranked its male counterpart for the first time in the history of the popularity chart. According to Social Security Administration data, the Quinn baby name ranking has remained consistently stable since the early 2000s at the 770th position and then entering the top 100 names in 2015. The Quinn popularity index has made quite the jump, with 3,596 babies named Quinn in 2017, to the 85th spot among the most popular name for girls and the 440th most popular name for boys, as per the latest 2020 data. Quinn is one of the first Irish unisex surnames that became widely used in the mid-nineties for girls. This is especially with the inception and rising popularity of TV shows like Dr. Quinn, Medicine Woman, and characters on the animated MTV show Daria, Zoey 101, and Glee.

Interest for the name Quinn has recorded a search interest of over ten for the past six years, reaching 100 in August 2016. The search value in the popularity index dipped to just 14 in July 2011.

Interest in Quinn – US

Over the last six years, interest in Quinn has recorded a consistent popularity score of over 10, reaching 100 in August 2016. The lowest search value of 16 on the popularity scale has been recorded on three instances, March 2011, May 2011, and July 2011.

Popularity of the name Quinn

Search trends mirror the highest interest in Quinn in Ireland in the last ten years, followed by countries like United States, Canada, United Kingdom, and Puerto Rico. This stylish name with an Irish reference to ancestry and associated meaning that hints at wisdom and intelligence of character surely makes it a winning choice for most Irish parents.

Search trends of Quinn – US

The sub-region of Rhode Island in the US leads in terms of the most searched city over the last ten years. West Virginia, Montana, Massachusetts, and Pennsylvania make it to the top 5 cities of the US, where search trends for Quinn have been recorded to be the highest.

Middle Names That Go With Quinn

A strong middle name may end up as a permanent moniker for your child later in life. Here are some of the best double names with Quinn that are applicable for both genders:

Celebrity names can have a profound influence on parents looking for a suitable moniker for their child. Here are some of the popular famous people called Quinn who may inspire you with their successful lives:

Baby names like Quinn bear familiarity with the name with a different spelling. Family names for Quinn can be passed down through generations and shared with close members of the family. Here are some of the other names for Quinn that are modified options for new parents :

Names that rhyme with Quinn can be phonetically motivated to sound the same. Here are some names that have a relatively common pronunciation as Quinn:

Parents can choose sibling names to complement each other and represent one coherent unit within a family. Here are some of the best sibling names that go with Quinn:

Nicknames are shortened pet forms of a first name that offers room for creativity. Here are some of the endearing and cute nicknames for Quinn that may give the original name a new, creative, and pleasant twist.

A current favorite among American parents, Quinn is one of the few Q names with a unique and off-beat appeal. This mature name is delicate enough to feel at home yet assertive enough to suit an emerging fashionista. Thus, Quinn makes a top choice for parents looking to give their baby an Irish unisex name.

Experiencing Motherhood. It All Begins With a Strip, and the Strip Says It All

Caring for Your Little One After They Get Their Vaccination Shot

A Guide to HIV and Breastfeeding