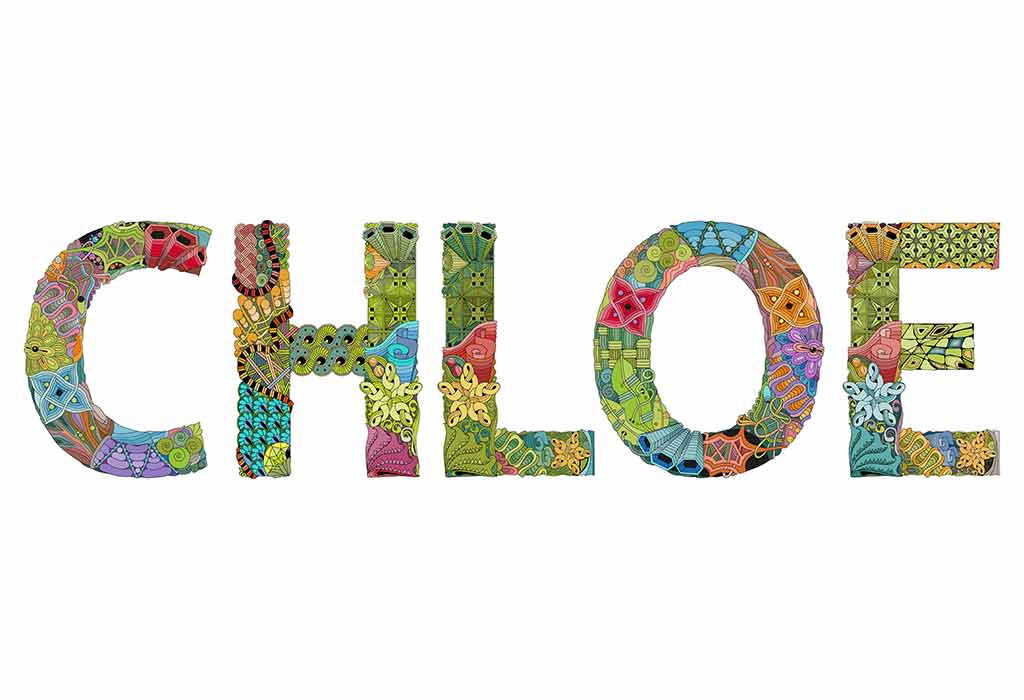 Since 1998, Chloe has been a top 100 name and a top 20 name from 2005 to 2016 before dwindling slightly down in popularity. It peaked again among the top 10 names between 2008 and 2011. Considered more dynamic than other Greek romantic literary names of the seventeenth century, Chloe exudes a fresh springtime vibe. The name Chloe has become widely popular in Canada, Australia, and Great Britain. The meaning of Chloe for the classic name of Greek origin is “young green shoot.”

What Does Chloe Mean?

Chloe is a timeless name derived from Greek mythology. This name belongs to Demeter, sister of Zeus and goddess of fertility and agriculture in Greek mythology. Due to the name’s relation to growth and sprouts, it is the summer or spring epithet of Demeter. The meaning of Chloe is ‘young green shoot’ or ‘bloom.’ It refers to the foliage that appears in the spring. In its Proto-Indo-European root, Chloe means “yellow or green color.” Chlodwig is a German male variation of Chloe, and it means ‘famous warrior.’

Derived from ancient Greek “Khlóros,” meaning a shade of pale greenish-yellow color, Chloe can change to Chloë in its Dutch, French, and English forms. This name is used chiefly in the English-speaking countries of the world like Ireland, Germany, the UK, and Australia, along with newfound usage in Spain and Italy. This Greek Christian name can be found in the Bible’s New Testament in 1 Corinthians 1:11 in the context of “the house of Chloe,” a Christian woman in Corinth, Greece.

Variants are alternatives that differ in spellings, nicknames or pen names, abbreviations, different with regards to components, cultural differences, and transliterations. Here are some of the Chloe name variations and other spellings for Chloe that originate from other languages:

How Popular Is the Name Chloe?

According to Social Security Administration data, the Chloe baby name ranking fell off the charts, only to re-enter at #849 in 1982. Since 2000, it was consistently among the top 50 girl names but has fallen out of popularity since 2010, after staying at its peak at position nine. According to Google search data analysis, Chloe’s popularity was at its peak in February 2018.

Over the last ten years, search trends for ‘Chloe’ have recorded a consistent popularity score of over 40, reaching 100 in May 2020. The lowest popularity index was recorded in May 2011 at just 37.

Interest in Chloe – US

Over the last ten years, search trends for ‘Chloe’ have recorded a consistent popularity score of over 40, reaching 100 in February 2018. The lowest popularity index was recorded in May 2011 and February 2012 at just 30.

Search trends show that the name has been searched the most in the United Kingdom in the last ten years, followed by Ireland, Australia, Singapore, and New Zealand. The promise of something new in its beautiful meaning made parents of the United Kingdom choose this sophisticated name for their baby girls.

Search trends of Chloe in the US

The metropolitan city of New York in the US is leading as the region generating the most searches over the decade. California, New Jersey, Massachusetts, and Hawaii round up the top 5 cities where search trends for Chloe have been the highest during the decade.

Middle Names That Go With Chloe

Here are some of the classy, unique, cute, and unusual double names with Chloe that can be a perfect match for your baby:

The broad public recognition and fame of celebrities have a significant influence on baby names. Here are some of the most famous people called Chloe:

Baby names like Chloe are easy to remember and easily pronounced. You can choose family names for Chloe to pair with a forename to make it sound better. Here are some of the other names for Chloe that have a youthful and vibrant appeal.

Names that rhyme with Chloe sound interesting to parents looking for lyrical names for their twins or younger children. Here are some names that sound coherent together and suit Chloe:

Fun or unique sibling names can be mixed and matched to make them sound good together. Here are some of the best sibling names that go with Chloe:

Nicknames allow you to become as fun and creative as possible as you can call your kid by any name based on their first name. Here are some of the most adorable nicknames for ‘Chloe’ that best describes the person or your emotion.

Chloe is a traditionally feminine name that invokes feelings of rejuvenation in nature. Although its popularity has waned in the past five years, the name still enjoys a massive revival among parents while naming their baby girls.