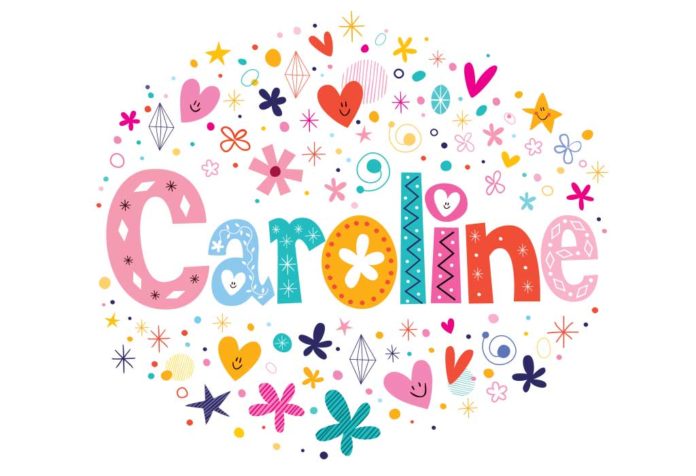 In This Article
Found primarily on Italian, French, and Scottish cultures, Caroline is the feminine version of the Medieval Latin form of Charles. It means “strong,” “free woman,” or “song of happiness,” depending on its linguistic origin. The queen consort of George II was named Caroline during the 18th century. Once fashionable during the 19th century, this perennial classic lost its charm during the 20th century. However, it is still considered a royal name today used by Princess Caroline of Monaco.

What Does Caroline Mean?

Derived from the Germanic origin, Caroline is a baby girl name that has gained immense popularity in the Christian religion. Caroline can be a form of the German and Scandinavian name Karl, a version of Charles. Karl, in turn, comes from the Old English ceorl, meaning a man of low birth’ or a ‘common man.’ Caroline was brought to England by Caroline of Anspach, the German queen of George II, in the 18th century. In later Middle High German and Middle English, both terms meant ‘man, fellow or husband.’ Despite Caroline’s humble beginnings, many Europeans of high rank and royals have chosen names derived from Karl/Carl. During the 8th/9th century, the Frankish leader, Charlemagne, introduced this name among the early Franks. After the Conquest of 1066, Caroline was brought to England by the Norman-French the Conquest of 1066. Caroline found much appreciation among the middle-classes of England in the 17th century after being influenced by the Stuart Kings Charles I and II. Later, the Queen Consorts of England, Caroline of Ansbach, and Caroline of Brunswick brought this lovely French name further glory. With the publicity of the love affair between the novelist Lady Caroline Lamb and romantic poet Lord Byron, Caroline gained further roots in the English aristocracy. Today, Caroline is quite popular in Denmark, France, and the US.

The other spellings for Caroline depend on the language of origin. Here are some of the Caroline name variations that may have originated from different cultures around the world to generate new interest in the name:

How Popular Is the Name Caroline?

Caroline’s popularity peaked about a century ago when Caroline’s baby name ranking stood within the Top 100 names for girls. Caroline was immensely popular in the U.S. in the 1960s, losing out of favor for a few decades before making a huge comeback during the 1980s. It remained in the top 100 since 2000 and steadily grew in popularity, reaching an all-time high of No. 62 in 2001. Nevertheless, Caroline remains relatively popular and maintains its spot at #55 in 2018. The daughter of former United States President John F. Kennedy was named Caroline Bouvier Kennedy. Caroline Wozniacki is a professional tennis player from Denmark. Even Prince Rainier named their daughter Caroline. According to Social Security Administration data of 2019, Caroline has been consistently popular, breaking into the top 50 and ranking at 55 in 2016 and 2017.

A consistent search value of over 20 has been recorded on interest for the name Caroline reaching 100 in Feb 2020. The lowest recorded value was at 20 on Sept 2021 on the popularity scale.

Interest in Caroline – the US

Popularity of the Name Caroline

As per the global trends, Caroline has been searched the most in France. Norway, Denmark, Belgium, and Ireland follow close behind to reach the top five positions in the popularity index. Being a French feminine form of Charles,  a sweet and subtle name like Caroline has grown in popularity mostly among parents of France.

Search Trends of Caroline in the US

Maryland has recorded the highest search value of 100 in the last ten years among the metro cities in the US. District Of Columbia, Virginia, Massachusetts, and Connecticut have made it to the top five positions where search trends for Caroline have been recorded as the highest.

Middle Names That Go With Caroline

The historical purpose of middle names is to honor a family member, a godparent, or even an outsider who is a local or national prominent figure. Here are some double names with Caroline that may attract an equal amount of praise and attention as the first name:

Baby names like Caroline may have different lengths of spelling but similar phonetic rhythms. Caroline’s family names can be an extension of a personal name that indicates one’s family, tribe, or community. Here are some other names for Caroline that may offer exciting alternatives to the given name.:

Rhyming names for Caroline can be natural substitutes for a given name due to their similar style note. Here are some names that rhyme with Caroline to sound aesthetically pleasing.:

Sibling names that go with Caroline can be selected, keeping in mind the enduring bond of love. You can choose names based on the same starting letter, theme, or country of origin. Here are some fun combinations of suitable sister names for Caroline and suitable brother names for Caroline that can feel cohesive but not interchangeable:

Nicknames or pet names showcase affection and closeness between parents and their children. Here are some choicest nicknames for Caroline that can often reflect the critical attribute of your child’s personality.

Caroline has become a timeless name for girls, conferring a special status for those considered American royalty. Girls named Caroline are curious, impulsive, and free-spirited, and they enjoy traveling and adapt easily to new situations. Thus, this vintage name with an exciting history sounds just as posh as today’s trending names but free of overuse. Delicate and delightful, Caroline will always remain a sophisticated choice that suits well for a grown woman and a curious little girl.

How to Inspire Academic Learning and Curiosity Through Experiential Play

Remember These 7 Things Before Cosmetic Surgery