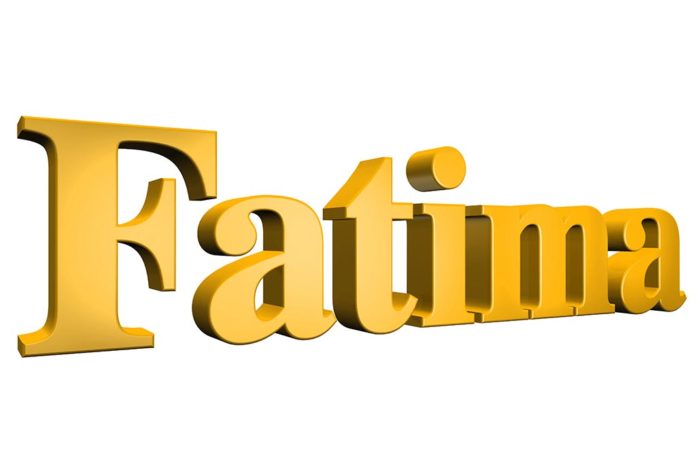 In This Article
Derived from the Arabic meaning “abstain,” meaning “chaste,” or “motherly,” Fatima is a popular baby name among Muslims as it belongs to the Prophet Muhammad’s favorite daughter. Fatima was his only child to bear children, which explains why she’s sometimes referred to as “the mother of all Muslims.” The name is also frequently given to Christian girls in honor of ‘Our Lady of Fatima’ due to a vision of the Virgin Mary in 1917 by three Christian children in Portugal. She appeared in the village of Fatima, Portugal. Fatima was one of the four perfect women according to the Quran. It became popular as a female personal name among Roman Catholic populations, particularly in the Portuguese and Spanish-speaking worlds.

What Does Fatima Mean?

Fatima is a well-known name for girls of Middle East Arabic origin. Gorgeous and captivating, Fatima is given to more than a thousand Muslim-American girls each year. According to the Quran, Fatima was the daughter of Muhammad and one of the four perfect women. This name is most common among the Urdu-speaking countries of the world. However, Fatima is not mentioned in the Quran, whether directly or indirectly; Fatima is the name of the Prophet’s daughter, which gives the name a high status among the Muslims.

Depending on the particular origin of a name, the other spellings for Fatima may differ but carry the same vibe. Some Fatima name variations bring versatility to the baby naming table.

How Popular Is the Name Fatima?

Fatima has been used as a girl’s name in the US ever since 1919, with over 34824 girls given the name in the past 200 years. Fatima’s popularity rose in the US after many Muslim immigrants came to America in the early 1970s. Fatima as a name first appeared on the Social Security Administration chart in 1973 and peaked in 2000 when its usage went up by 171.31%. It rose in 2001 and again in 2007 before sliding down the list. In 2018 Fatima’s baby name ranking fell below the 300th most popular name in the U.S. Fatima ranks at 139 per the recent 2022 data. A town in Portugal and an important Christian pilgrimage center is named Fatima, along with “Fatima The Gracious,” a book by Shi’a scholar Abu Muhammad Ordoni about Fatima Zahra. “Fatima Blush” is a well-known fictional character from the 1983 James Bond film “Never Say Never Again,” which may have influenced the recent rise in popularity of the name. The princess of Morocco is also named Princess Lalla Fatima Zohra.

A consistent search value of over 30 has been recorded on interest for the name Fatima reaching 100 in May 2017. The lowest recorded value was 33 in Nov 2020 and March 2021 on the popularity scale.

Interest in Fatima – the US

Popularity of the Name Fatima

Global search trends record the highest value in May 2017 in Portugal, followed by Pakistan, Morocco, Brazil, and Paraguay. With a large Muslim population in Portugal, an Urdu name like Fatima has achieved great fame and acceptance.

Search Trends of Fatima in the US

Among the metro cities in the US, Rhode Island has recorded the highest search value of 100 in the last ten years. New Jersey, Massachusetts, Connecticut, and Louisiana have made it to the top five positions, where search trends for Fatima have been recorded as the highest.

Middle Names That Go With Fatima

Middle names can augment the first name and are often used to commemorate a loved one, an older relative, someone who has died, or an admirable hero. Here are some double names with Fatima that are adorable combos:

Famous celebrities named Fatima are widely recognized in a given society and commands a great degree of public and media attention. Here are some of the popular people named Fatima who can inspire parents with their fame and popularity:

Baby-names like Fatima may hit the same style note but still maintain their uniqueness. Family names for Fatima can preserve the continuation of the family symbolize essential family connections, genealogy, and bonds within a group of people. Here are some other names for Fatima that may cater to a range of tastes and sensibilities:

Fatima’s rhyming names can be formed by using words that match and form meaningful names that rhyme. Here are some names that rhyme with Fatima to form phonetically suitable substitutes:

Fatima’s sibling names can be chosen based on similar alphabets, common themes, or syllables corresponding to their birth star. Here are some suggestions to help you pick suitable sister names for Fatima and suitable brother names for Fatima for your beloved children:

Nicknames are shortened monikers primarily used to express affection, a form of endearment, a way to evoke laughter, and represent a strong emotional bond between parents and their children. Here are some of the most swoon-worthy nicknames for Fatima that not just sound sweet but are easy to remember:

Fatima named girls are generally curious and impulsive; they’re free-spirited, enjoy traveling, and quickly adapt to new situations. Due to the spiritual association of this name, Fatima has been trending on the charts for a long time now. Parents often choose them to convey their faith, belief, and culture. Fatima sounds cool and has a deeper meaning that will leave definite energetic impressions and alter the soul’s path that carries the name.

22 Weeks Pregnant With Twins or Multiples

Ria’s Most Precious Birthday Present, A Gift For The Entire Life

How to Clean a Refrigerator at Home – Easy Tips and Tricks

What’s in a Name? A Lot After All!