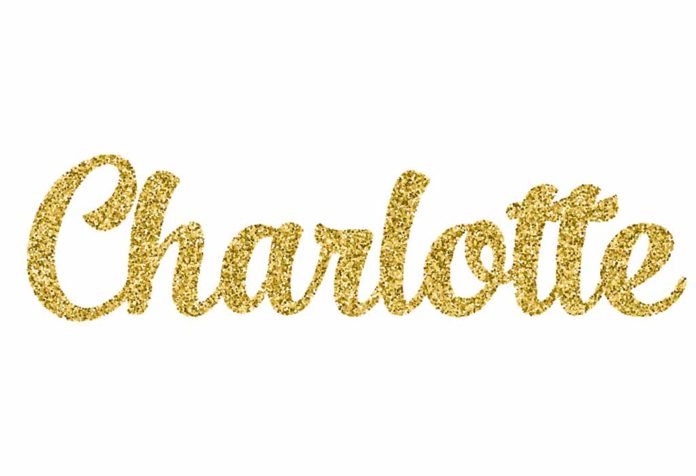 Charlotte is quintessentially a feminine name of French origin. Derived from Charlot, Charles is its masculine equivalent which means ‘little Charles.’ It comes from the Old English “ceorl,” which means a “free man.” Charlot was the name of Charlemagne’s son in French literature and legend. Eventually, the name was popularized by England’s Queen Charlotte Sophia, wife of King George III. Charlotte has been a fashionable choice in Britain since the arrival of Charlotte of Mecklenburg-Strelitz, the 17-year-old bride of British King George III, who reigned during the American Revolution.

What Does Charlotte Mean?

As a nickname for Charles, Charlotte is the French spelling of the Germanic name Carl or Karl. The meaning of Charlotte is “free man” or “petite.” Initially, Charlotte’s name distinguished a free person from a bondsman or slave ‘thew’ on the one hand and a noble person ‘eorl’ on the other.

Charlotte is a Christian girl name that originated with multiple meanings. Charlotte dates back to the 14th century. England’s King Charles II had two illegitimate daughters with the name. Also, the second wife of King Louis XI of France was Charlotte of Savoy, and Charlotte de Bourbon-La Marche (1388-1422) was Queen of Cyprus. Charlotte is a special name that has been famous and rare at the same time in most English-speaking countries of the world.

How Popular Is the Name Charlotte?

The Charlotte popularity ranking has seen an upward swing in recent years. It rejoined the top 100 names in 2007 and kept rising, reaching the top 50 in 2011 and top 20 for the first time in 2012. The Charlotte baby name ranking has finally reached the top 10 in 2014 and currently ranks at No. 4 girl names according to the latest statistical data of 2020. Charlotte appears as the spidery protagonist in the classic children’s novel “Charlotte’s Web” by E.B White and as a host of widely varied role models from Charlotte Brontë to the more recent Charlotte York of Sex and the City.

A consistent search value of over 70 has been recorded on interest for Charlotte, reaching 100 in September 2016. The lowest value was recorded was at 50 in November 2020.

Interest in Charlotte – US

Search trends for the name Charlotte show a search value of over 60 reaching 100 in September 2016. It scored the lowest value of 42 in April 2020.

The Popularity of the name Charlotte

Interest in the name Charlotte has been the highest in the United States in the past 10 years. Sweden, Denmark, France, and the United Kingdom make it to the top five positions. The parents of the US have well received this name due to its meaning which upholds the free spirit of humans in the land of America.

Search trends of Charlotte – US

North Carolina is the sub-region in the US where the highest number of searches have been recorded in the last 10 years. South Carolina, Georgia, Florida, and Tennessee are the top 5 cities where search trends for Charlotte have been registered to be the highest.

Middle Names That Go With Charlotte

A middle name has a special significance that can influence the choice of a name for a child. Some best double names with Charlotte that may accentuate the beauty of the name:

Celebrity names add star-power to the baby-naming game that might influence the decision of parents. Here’s a list of some of the most Charlotte-named celebrities who have created a niche for themselves in their professional arenas:

Names that rhyme with Charlotte sound absolutely poetic and aesthetically appealing. Here are some names that sound like Charlotte to become a natural choice with new parents:

Sibling names may convey the exact status of the relationship between brothers and sisters. Here are some of the best sibling names that go with Charlotte to positively impact the family.

Nicknames can permanently get stuck to our identity and uphold our personality traits. Here are some of the nicknames for the name Charlotte that may express affection and amusement.

Charlotte is an elegant royal name that has graced the pages of history with her presence felt time and time again both among the royalty and commoners. After stirring up childhood nostalgia with Charlotte’s Web, this name has managed to remain dignified, aging well into adulthood becoming a perennial favorite. Appealing to a wide range of parents, Charlotte applies to both kids yet grownups, sophisticated yet lush enough to garner favor with parents.

Sleeping While Breastfeeding a Baby – Is It Safe?

How to Handle Shyness in Children & Ways to Overcome It

Essential Oils to Improve Fertility in Men and Women

Mom: Everything Is In This Three Letter Word!