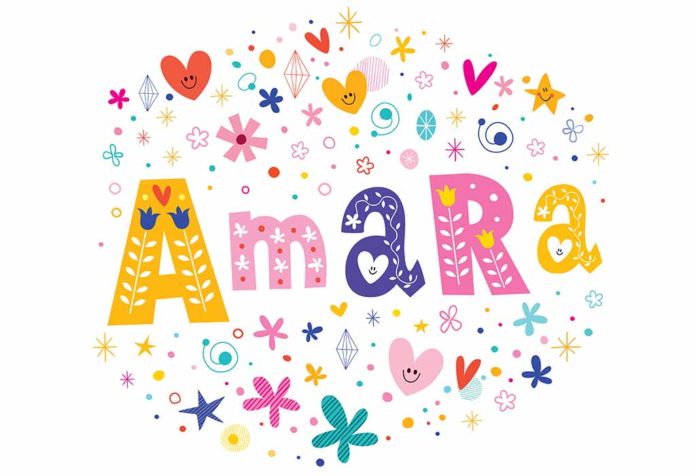 In Italian, “amara” means “bitter,” whereas Amara means ‘grace,’ ‘mercy’ or ‘kindness’ in the Igbo language, spoken in Nigeria and other parts of Africa. It also means “deathless” or “immortal” in Sanskrit, the language of ancient India.

What Does Amara Mean?

Derived from Latin ‘amaras’ meaning ‘bitter,’ Amara is the Latin and Italian word for ‘bitter’ coming from Mara. The meaning of Amara is “everlasting’ or “eternal” in German and “sweetheart, dear” in Arabic. It also comes from Greek Amarantos, meaning ‘unfading.’ The meaning of Amara in Igbo can be ‘gracious’ or ‘grace.’ In Mongolian, Amara means ‘peaceful.’ Amara, in its Sanskrit origin, comes from the prefix a- ‘no/not” and the root word Mara meaning ‘death.’ Therefore, Amara can mean ‘immortal’ in Hindi, which can be considered as a female equivalent of the male Amar. The multiple meanings of these names bear positive traits that you want your child’s character to incorporate.

Derived from various cultural sources, Amara is found in multiple languages and has different meanings in African, Indian, and European cultures. Amara has seen a recent surge in popularity among African-Americans as it originally comes from Nigeria and makes way to celebrate one’s African heritage. It is also commonly used among Spanish speakers due to its reference to the Latin verb ‘amare,’ meaning ‘to love.’

Amara name variations sound worthy of consideration in foreign languages around the world. Some spellings for Amara that also make a positive impact as much as the real name:

How Popular Is the Name Amara?

Despite being widely used for a long time in Asia and Africa, Amara has been famous in the US for nearly 20 years. The Amara baby name ranking reached No. 797 after appearing for the first time among the top 1,000 girl names in the US in 2000. Since then, it climbed up fast to break into the top 500 names in 2015. According to the 2020 statistical data, the Amara popularity index reached #142 for girls in America, suggesting the renewed interest in the name among new-age parents.

A search value of over 40 has been consistently recorded for Amara, reaching 100 in January 2018. The most economical value was recorded was at 40 in November 2012 and December 2012.

Interest in Amara – US

Popularity of the Name Amara

As per the records of popularity index, interest in the name Amara has been registered highest in the Dominican Republic in the past 10 years. Tunisia, Zimbabwe, Singapore, and Ethiopia have made it to the top five positions. As the Italian community has been instrumental in forming a number of the identifying characteristics of the country like political, social, economic, and cultural structures that played a part in molding the current Dominican Republic, it is no wonder that the Italian word Amara is very popular there.

Search trends of Amara in the US

Among the sub-region of the US, where the most searches for the name Amara have been recorded, the highest has been in Utah over the last 10 years. Arizona, Florida, New Jersey, and Maryland are the top 5 cities where search trends for Amara have been registered to be the highest.

Middle Names That Go With Amara

A meaningful maiden name can keep your maiden name alive and give the nod to your heritage or honor your favorite relative. Some suggestions for double names with Amara that may fit between the formal and last names:

Some most popular personalities are named Amara, whose name is big enough to embody their identity.

Baby names like Amara may also reach the highest popularity bar as the original name. Family names for Amara need to be a source of pride for the name’s bearer. Some of the other names for Amara that may allow room for experimentation are.

Names that rhyme with Amara can be made by applying phonetic rules with two different spellings but similar pronunciations. Here are some names that sound like Amara made by principles of its phonetic algorithm:

Nicknames are special terms of endearment we’re best known by during our childhood and beyond. Here are some of the nicknames for the name Amara that may never get too outdated:

Whatever meaning appeals to you as a parent, Amara is a freshly exotic and an understatedly pretty choice for girls today. With so much going for this strong, attractive, and stylish name, Amara is truly a multicultural choice that is slowly coming into the limelight in both the US and the UK.

Tips to Foster a Healthy Sibling Relationship Between Your Kids

20 Best Drought-Tolerant Plants For Your Garden

How to Communicate Effectively With Your Child Before They Turn Two?