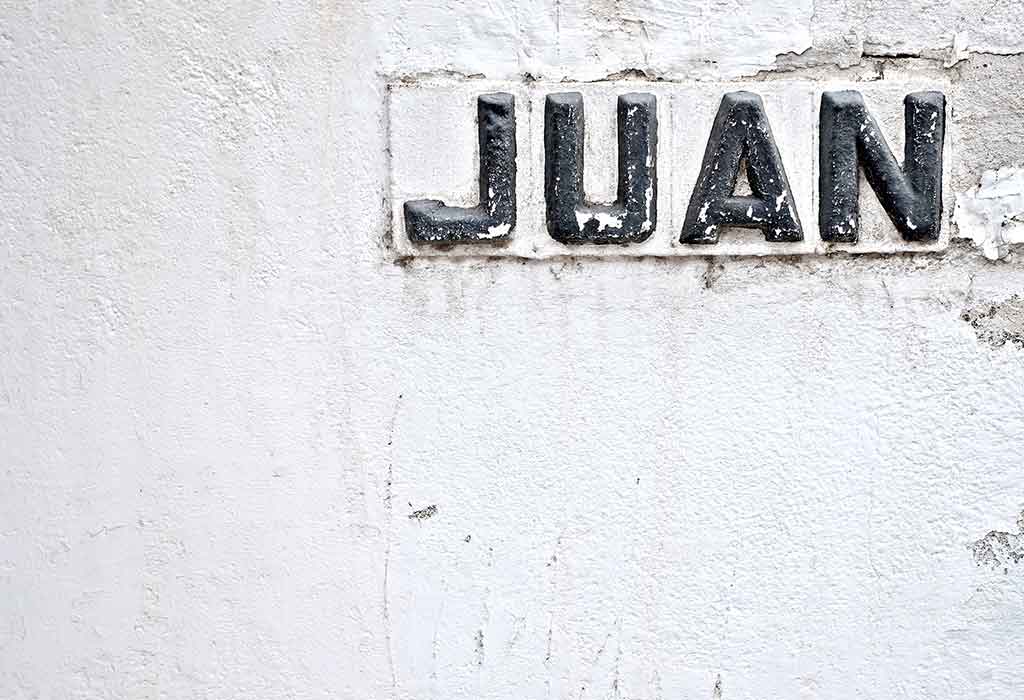 Juan is a traditional name that first appears in its Hebrew form in the Old Testament. The name comes after Juan Carlos I, the former king of Spain, John the Baptist in the Bible, and Spanish explorer Juan Ponce de Leon, who traveled across the Atlantic Ocean. he was also the first governor of Puerto Rico. Juan is familiar through references such as Don Juan and San Juan.

What Does Juan Mean?

Derived from the Hebrew Yohanan, the meaning of Juan is “graced by God” or ‘God is merciful.’ This highly popular Spanish cognate of John means ‘God is gracious’ or ‘gift from God.’ Derived from the Hebrew Yehanan, a short form of Yehohanan, the name can also mean ‘Yahweh is gracious.’ Adapted from the Hebrew name Yohanan as Ioannes, later Johannes in Late Latin, and John in English, Juan can easily be paired with other names to form countless high-achieving namesakes that run the gamut of commoners, saints, and monarchs. The meaning of Juan in Mandarin is ‘beautiful, graceful,’ which a common given name in Chinese communities is.

Juan is a Spanish and Manx version of John that has been in use since the Middle Ages. Juan is a popular name in Spain and other Spanish-speaking communities worldwide, including the Philippines, although pronounced differently in the Isle of Man. Its diminutive form is Juanito, which is equivalent to Johnny in Spanish. Arguably one of the most famous names of Christian descent, this traditional name with biblical origin exudes strength, smartness, and kindness. The feminine form, Juana, is comparable to Jane, Joan, or Joanna.

The multiple Juan name variations offer parents a wide range of choices before deciding on a name. Some of the other spellings for Juan are derived from other languages and cultures.

How Popular Is the Name Juan?

Juan was reintroduced to Western Europeans after the First Crusade of the 11th century by the Eastern Christians from the Byzantium Empire. Despite its Spanish origin, it spread throughout Europe in various forms. The Juan baby name ranking stood at no. 28 in Spain in 2009 and ranked high in Mexico, paired with other first names. Ever since 1880, the name has been used in the US, with over 3,57,886 boys named Juan in the past 200 years. The Juan popularity index as a baby name rose in 1990 when its usage went up by 113.48%. In this year, 6738 babies were named Juan, which was 0.1726% of the total number of baby boys born in the USA that year. According to Social Security Administration data, Juan has recently shown a slight decline in popularity, although it held a spot in the top 100 from 2000 to 2015. Juan remains in the top 150, as reflected in the current naming trend.

Interest for the name Juan has recorded a search interest of over 49 for six years consecutively, reaching 100 in August 2016. However, the search popularity index dipped to just 44 in November 2020.

Interest in Juan – US

Over the last six years, interest for the name Juan has recorded a consistent search value of over 35, reaching 100 in August 2016. The lowest search popularity of 35 has been recorded on the popularity scale in April 2020 and November 2020.

Popularity of the name Juan

Search trends reflect the highest interest for the name Juan in Puerto Rico in the last ten years. This is followed by Argentina, Dominican Republic, Nicaragua, and Spain. As Hispanic-American babies were often given names of saints derived from the Bible, with the spread of Hispanic culture in Latin American countries, Juan has been highly popular in Puerto Rico.

Search trends of Juan in the US

Among the sub-regions of the US, New Mexico leads in terms of the most searched city over the last ten years. California, Florida, Texas, and Washington make it to the top 5 cities of the US, where search trends for Juan have been recorded to be the highest.

Middle Names That Go With Juan

Middle names help distinguish between other people with the same first name. Here are some of the best double names with Juan that create the perfect name combination.:

Most parents are highly inspired by successful people who use their name to gain respect and recognition. Here are some of the most popular personalities called Juan who can influence your choice of a baby name:

Baby names like Juan bear the familiarity of the name with a different spelling. Family names for Juan can be passed down through generations and shared with close members of the family. Here are some of the other names for Juan that are modified options for new parents:

You should thoughtfully choose sibling names to establish a foundation of love and bond within the family. Here are some of the best sibling names that go with Juan:

Nicknames or pet forms of a name may represent the status of the relationship between parents and a child. Here is a list of the silliest, cutest, or coolest nicknames for the name Juan and can signify a sense of closeness with your little one.

Especially approved for the male gender, a short and sweet baby name like Juan is set to stay a constant favorite among parents in the coming years due to its simple pronunciation. Considering its spiritual meaning that helps to re-create a spiritual bond with God and be thankful for his gracious gift, the name Juan is the perfect choice for new parents.