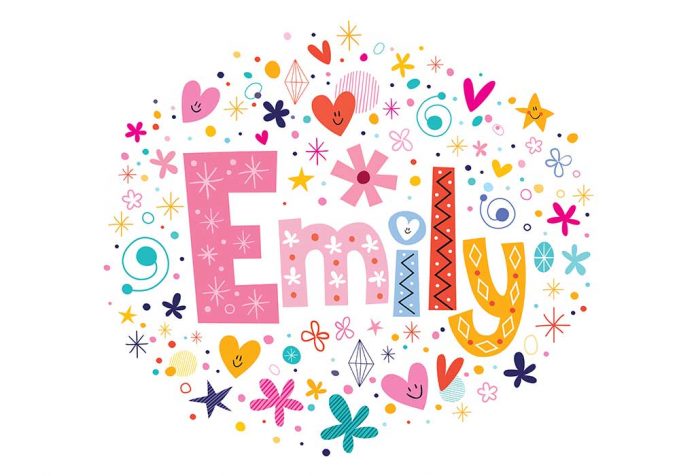 After entering the top 10 names in 1991, this classic name has been one of the most famous for girls in the USA for almost 11 years. A masculine variant of Emily is ‘Emil’ or ‘Emile,’ although Emil is more common in Germanic and Scandinavian speaking countries. Emily comes from Latin ‘Aemilia’ that transformed into Emily in English.

What Does Emily Mean?

Though old-fashioned to some, Emily is a timeless name derived from the Roman family name Aemilius, an elite and influential family in ancient Rome. The name was taken from the Germanic name Amalia. The meaning of Emily in Latin is ‘rival,’ ‘eager,’ ‘laborious,’ or ‘strive.’ The meaning of Emily for the Greek name Amalia comes from the word ‘Aimulos,’ meaning ‘friendly,’ ‘tender,’ and ‘kind.’

Derived from Latin origin, Emily is an English form of the Roman name Aemilia which evolved from the Latin Aemulus, meaning ‘rival’ or ‘competitor.’ This name is primarily used in the English-speaking countries of the world. The surname Emily is originally derived from the Old English word ‘Amalric,’ which referred to someone who held ‘great power.’

Name variants are alternatives or equivalent that differ in nicknames, spellings, abbreviations, cognates, variations in the order of components, cultural differences, and transliterations. Here are some cultural Emily name variations and other spellings for Emily in varied languages and cultures:

How Popular Is the Name Emily?

According to 2018 Social Security Administration data, after being immensely popular throughout the last decade, peaking in popularity at position one for girls in America from 1996 to 2007. Emily’s baby name ranking remained consistently in the top 10 from 1991 to 2016. The SSA has ranked Emily’s popularity at No.18 as per the latest statistics of 2020 among girl names in the U.S.

Over the years, Emily has stood steadfast throughout history. Its popularity increased due to its sweet sound and endearing nicknames, such as the classic Em and Emma and the more delicate Emmy. Emily was popularized after it appeared as the name of a character in Williams Shakespeare’s tragedy Othello. Bestowed upon literary figures and forward thinkers, it makes a timeless choice for parents. This is mainly due to the name being inspired by Emily Brontë and Emily Dickinson, evoking images of a smart and beautiful woman.

Search trends for the name Emily have recorded a consistent popularity scale score of over 40 in the last ten years, reaching 100 in Oct 2020. The lowest popularity was recorded in Sept 2019 at just 41.

Interest in Emily – US

Search trends for the name Emily have also recorded a consistent search value of over 40 within the US in the last ten years. The popularity of the name reached 100 in July 2012, while search trends recorded the lowest value in March 2020 at just 39.

Popularity of the name Emily

Search trends of the last ten years reveal that the name has been searched the most in the United Kingdom. Countries like United States, Canada, Ireland, and Australia follow close. As most English-speaking countries have been using Emily as a forename for girls since medieval times, it has been hugely popular in the United Kingdom.

Search trends of Emily in the US

Massachusetts is the city of the US where the most searches for the name Emily have been recorded over the last ten years. Following close behind are Vermont, the District of Columbia, Minnesota, and Connecticut. These are the top 5 cities of the US, where search trends for Emily have been the highest.

Middle Names That Go With Emily

The perfect middle name can augment the name Emily as well as its meaning. Here are some of the double names with Emily that can be strung together for honoring a family tradition, a loved one, making it sound lovelier, or for preserving cultural heritage:

Super-cool and avant-garde names of celebrities can be fodder for inspiration while naming a baby. Here is an inventory of famous people called Emily that can make your child stand out in the crowd.

Baby names like Emily can be chosen after determining how the first name sounds with the last name. Family names for Emily can keep the classic name alive in a unique way. Here we suggest other names for Emily that form a similar name pattern with stressed and unstressed syllables.

Be it twins or siblings, names that rhyme with Emily can sound lyrical while having the same or different meaning. You can match names with similar alphabets, a common theme, or one that corresponds to a birth star. One can transform a classic name like Emily into a contemporary form to generate interest among modern parents.

It would be best to give Emily’s siblings names that reflect a similar origin, meaning, or sound. The similarity in the names shall work together to build a stronger bond between the siblings. Here we suggest some befitting sibling names with Emily:

Nicknames can be an alternative for a formal or proper name that fosters an emotional connection with your child. Here are some of the endearing nicknames for the name Emily:

Emily is quintessentially a traditional and feminine name that maintains its significance in other cultures, countries, and history, mainly due to its deep-rooted Latin association. Although its popularity has changed in the past ten years, Emily is a simple, pretty yet strong name that’s coming back in style.

Try This Korean Skincare Regime To Get Glass-like Skin