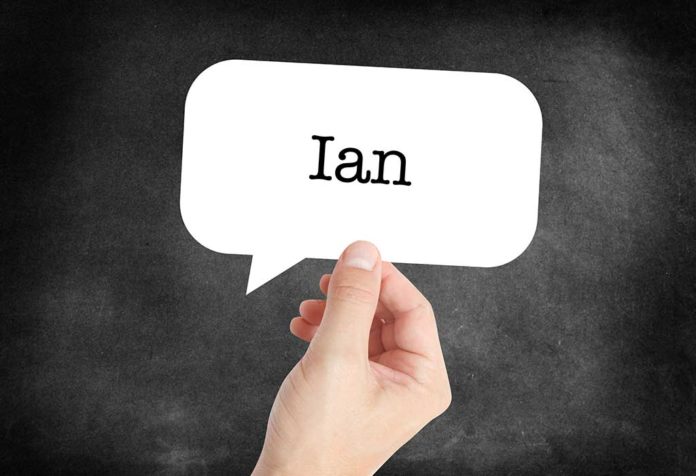 Ian is a variant of the English name John that comes from the Medieval Latin name Johannes. It is derived from the Hebrew given name Yohanan, meaning ‘the Lord is gracious.’ Mainly used in Scotland in the late nineteenth century, the popularity of Ian soon spread throughout the English-speaking world with the spelling as Ian, which is an Anglicization of the Scottish Gaelic forename Iain.

What Does Ian Mean?

Ian is a Scottish version of John from the Hebrew name Yohanan, meaning “God is benevolent” or “the Lord is gracious.” It is also a variant of the Greek and Classical Latin variants Ioannes mainly used in the Greek-speaking countries of Europe. As per its Greek and Classical Latin variant Ioannes, the meaning of Ian stands at “Yahweh is gracious.”

Ian is a masculine name of Scottish origin, meaning ‘God is Gracious’ or ‘Gift of God.’ After initially trending in England, Ian was exported to the US. It has made a rare leap from being a successful suffix to a successful baby first name over the years. The sheer simplicity of this name, with two vowels and a sturdy N, makes it a popular name of choice for modern parents. As per the etymological and historical origin of the baby name Ian, its corresponding John was one of King David’s mighty men in the Old Testament or Hebrew Bible.

Name variations or alternatives match the style and impact of a cool and unique name like Ian. Here are some Ian name variations from different origins that parents can consider if they want to go for other spellings for Ian:

How Popular Is the Name Ian?

According to the name’s trendline, Ian’s popularity ranking has fallen out of favor among the top 100 baby names for boys in the United Kingdom after having peaked in popularity as one of the top 10 names in the 1960s. After entering the top 100 name squad in the US in 1982, it claimed the 65th position in 2003, 78th position in 2018, 81st position in 2019, until the Ian baby name ranking settled at 83 in 2020. There are 93,631 people in the US with the first name Ian while more than 99.9 percent of the male population has Ian as the first name.

Interest for the name Ian shows a consistent search value of over 70, reaching 100 in July 2012 and July 2014. The lowest value of 45 was registered on the popularity scale in March 2020.

Interest in Ian – US

The worldwide trend shows interest for ‘Ian’ has recorded the highest value in Trinidad and Tobago in the past ten years. Countries like United Kingdom, Ireland, Australia, and New Zealand follow close behind. With the advent of the British, Christianity gained a foothold in various forms, with 63.2 percent of the population of Trinidad and Tobago practicing it and contributing to the popularity of a religious name like Ian.

Search trends of Ian in the US

Ian’s name shows the highest interest in the sub-region of the District of Columbia in the US over the last ten years. Connecticut, Rhode Island, Vermont, and Massachusetts follow to be in the top five positions.

Middle Names That Go With Ian

Middle names help to ‘personalize’ a child’s name by giving a lesser important name representing the person or an idea important to the parents. Here are some of the best double names with Ian that may be deserving contenders as the notable namesake for your child:

Celebrity names get immortalized after reaching the heights of stardom. Here are some of the most popular personalities named Ian who can influence your name selection process:

Baby names like Ian can offer possibilities with or without representing its specific meaning. Family names for Ian can be creatively combined and become an essential part of a child’s identity. Here are some of the other names for Ian that signify the greatness of its meaning.

It’s hard to find more creative inspiration for names that rhyme with Ian. Here are some names that pay homage to the sound of Ian:

Sibling names complement each other to strike a balance of coordination. Here are some of the best sibling names that go with Ian and exude the same feelings and emotions:

Nicknames are shortened forms of a given name and can be used to signify belonging. Here are some funny and adorable nicknames for Ian that can last a lifetime:

Since babies are a blessing from God, parents who want to honor this miracle can select an appropriate name like Ian that means ‘a gift from God’. Although it has deep roots spanning back years, the modern air about Ian may flatter your child’s personality and make him proud of your choice.

Snacks for Toddlers – Ideas and Recipes

Why We Should Bother to Mind Our Language Around Children