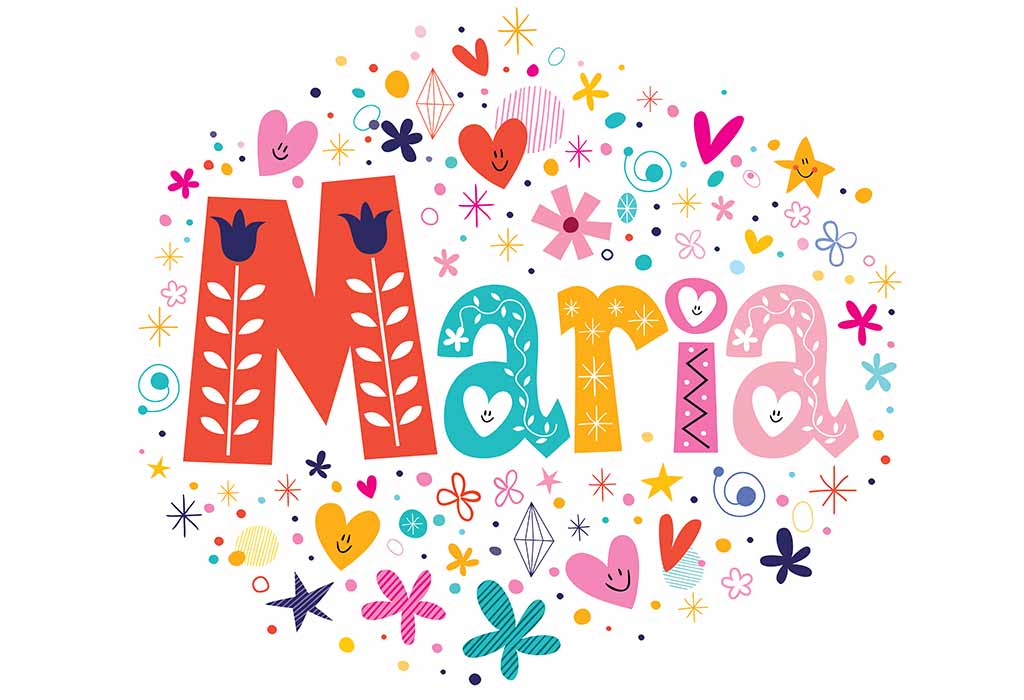 Derived from the Hebrew name Maryam/Mariam, Maria in Latin means ‘beloved,’ ‘sea of bitterness,’ and ‘rebellious.’ It’s also considered a variation of the name Mary, the mother of Jesus in some cultures. Alternative definitions suggest ‘wished-for child’ and ‘mistress or lady of the sea.’ Maria is also a feminine variation for the Roman name ‘Marius’ and is popular as a masculine middle name in Poland, Italy, and Germany. The Biblical form of the name stems from Latin Mirjam, which has a Hebrew and Egyptian origin.

What Does Maria Mean?

The meaning of Maria in Latin is “drop of the sea.” When mar, meaning ‘drop,’ or mará, meaning ‘bitterness,’ combine with yam meaning ‘sea,’ it forms ‘sea of bitterness.’ The meaning of Maria is also “star of the sea,” which comes from Hebrew “maor” meaning ‘star/light,’ while the Hebrew “meri” means “wished for child” or ‘rebellious one.’ Maria means “beloved” which comes from Egyptian “mry.” Derived from Hebrew “róm” meaning height, Maria can refer to the “exalted one.”

Maria is found in many languages and is mainly influenced by Latin Christianity. Historically, Maria is a feminine form of the Roman name Marius. After the spread of Christianity across the Roman empire, Maria became the Latinised form of the name of Miriam, the mother of Jesus. The Syro-Aramaic name Maryam is derived from the Biblical Hebrew name Miriam. The Latin name Maria and the Hebrew-derived Maria combined to form a single name. Maria is also sometimes used as a male (middle) name in many Central European countries and countries with strong Catholic traditions, where it signified patronage of the Virgin Mary. Other Marias who appear in the New Testament are Maria Magdalena and Maria Salomé, disciples of Jesus, and Maria Betânia, sister of Lazarus. The name is also rendered Maryam in the Quran, but Arabic reflects the Christian given name as MÄrya or MÄryÄ as in MÄrya al-Qibiá¹­iyya, a Coptic Egyptian woman who was a bondmaid to the Islamic prophet Muhammad. Maria is widely used in both Spanish and English-speaking countries.

Maria name variations indicate diminutives that are modified to convey a slighter degree of its root meaning. Here are some of the other spellings for Maria that may be alternatives in other languages:

How Popular Is the Name Maria?

Search trends for the name Maria have recorded a consistent search value of over 60 over the last seven years, reaching 100 in September 2017. The lowest value was recorded at 57 in January 2021 and June 2021.

Interest in Maria – US

Over the last ten years, search trends for the name Maria have recorded a consistent search value of over 20 reaching 100 in September 2017. The value dipped to its lowest point at just 24 in October 2018.

Popularity of the name Maria

Search trends show that Maria has been searched the most in Spain in the last ten years. Countries like Portugal, Brazil, Peru, and Argentina follow close behind. As most Spanish names for girls end with the letter’ a’, Maria has a feminine and elegant touch that makes it an all-time favorite in Spain.

Search trends of Maria – US

California is a sub-region of the US where the name Maria has recorded maximum search interest over the last ten years. Following close behind are Florida, New York, New Jersey, and Massachusetts that make it to the top 5 cities of the US.

Middle Names That Go With Maria

A middle name can distinguish a person from others with the same given name and surname. Here are some of the surprising double names with Maria to consider from.

Parents who like to pin a celebrity’s name on their progeny can think of the unique names that would rule the limelight. Here is a list of famous people and characters called Maria that can make your child a star:

Baby names like Maria can convey a meaningful association with the original name. Family names for Maria is a form of social address that enhances the importance of the first names. Here are some of the other names for Maria that may reflect the character traits we want our kids to have.

Names that rhyme with Maria follow a similar lyrical tone and sound. A classic name like Maria can be shaped into a familiar pattern to impress new parents.

Sibling names can complement each other celebrate the bond of love between them. Here are some of the most suitable sibling names that go with Maria:

Nicknames are special monikers that represent our heartfelt feelings for our child. Here are some nicknames for the name Maria that may be assigned to a child under private circumstances:

Parents looking to honor their Latin roots or pay tribute to a culture rooted in tradition can choose a Christian name like Maria that has maintained its significance through generations and continues to do so due to its strong Biblical roots.