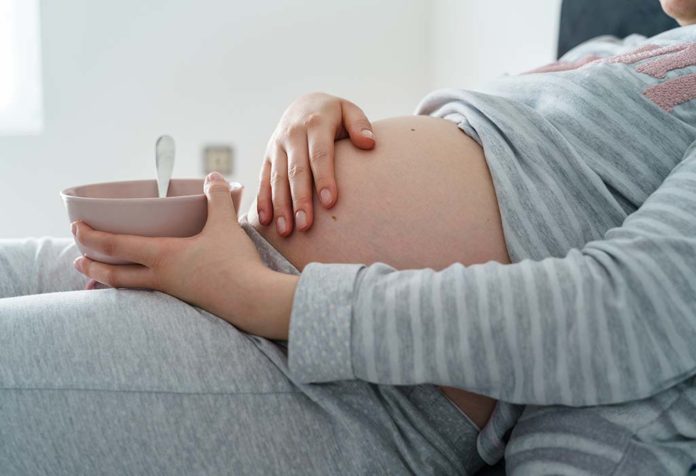 In This Article
Consuming clams while pregnant is safe. Pregnant women may safely ingest clams as long as they are sufficiently cooked. Consume clams that are raw or undercooked at all costs. Pregnant women may have pasteurized milk and cream, as well as clams, in chowder. Here, we will focus on the widely popular clam chowder and whether it is safe to be consumed during pregnancy.

What Is Clam Chowder?

Clam chowder is a famous soup that is easy to make at home with a few simple ingredients. Chowders come in various flavors, but clam chowder is the most popular. The soup may include clams, vegetables, shallots, and meat, depending on your preferences. The fundamental difference between the two is the broth: some like a thick, creamy soup produced with milk; others prefer a red broth made with tomatoes; while yet others prefer a translucent broth created with clam juice. Whatever your origins, everyone feels their clam chowder is the greatest.

Pregnant women may safely eat clams by cooking clam chowder while pregnant. Eating raw clams is never a good idea, especially if you wonder, “is clam chowder safe during pregnancy?”

Precautions to Take While Eating Clam Chowder During Pregnancy

Soup with clams or grilled flounder filets is an excellent choice. Take the following precautions:

Fish and shellfish that are raw or undercooked are more susceptible to parasites and microbial contamination. They may spread listeriosis, toxoplasmosis, and salmonella when consumed. The immune system is compromised during pregnancy, reducing its capacity to defend itself against foodborne infections. Your infant’s immune system is not fully developed. Uncooked or raw fish might result in congenital disabilities or miscarriages.

Mercury levels in most fish are high enough to harm your infant’s growing neurological system. The FDA advises against eating these items.

The FDA offers canned light tuna for less mercury than albacore (white) tuna. However, limit yourself to six ounces of canned tuna each week. Mercury builds in the bloodstream over time, so use caution while pregnant. Pregnant women who suspect they have been exposed to mercury should see their physician immediately.

Mercury is a naturally occurring element present in the majority of shellfish. Consuming a variety of fish and shellfish, on the other hand, may assist in limiting mercury consumption. Pregnant women are deemed safe to consume up to 12 ounces of fish each week. Bear in mind that the usual serving size for fish is 3–6 ounces.

When prepared correctly, seafood is safe to eat during pregnancy. As a result, use caution in making your selections. Uncooked or raw fish might be hazardous to your health. Cooking destroys the majority of parasites and bacteria. Thus, maintain a hot supper. To guarantee correct cooking, use a food thermometer. Return lukewarm restaurant meals. Avoid making your meal near or on raw fish or meat whether you’re cooking, eating out, or ordering delivery. This minimizes the possibility of parasites or pathogens being embedded in your food.

Food safety is equally dependent on food handling, preparation, and storage. The following are some suggestions for enhancing the safety and lifespan of your seafood:

How to Include Clams in Your Pregnancy Diet?

Clam chowder is a lot easier to make than you would think. You’ll be shocked at how creamy, and savory homemade clam chowder is. If you have a few pantry ingredients on hand, you can include cooked clams while pregnant in your diet.

Is clam chowder safe to consume during pregnancy? Affirmative, there is a resounding yes to this question. Consequently, you can relax and enjoy your baked clams while pregnant guilt-free. While pregnant ladies who want seafood may consume clams, physicians advise against eating raw or undercooked clams to stay safe from parasites and bacteria. Likewise, the Food and Drug Administration (FDA) recommends limiting your intake of clams since seafood is known to contain mercury.

How Your Baby Fares in the Auditory Development Scale

The Best Way To Plant and Grow an Avocado Tree