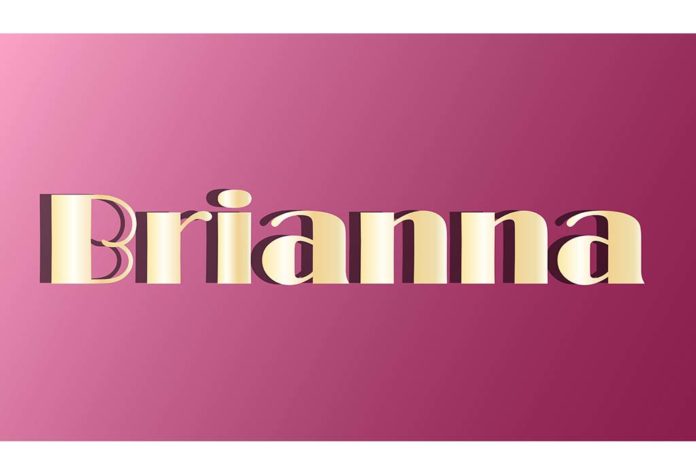 Of Irish origin, Brianna is a feminine name, meaning ‘strong,’ ‘virtuous,’ ‘honorable,’ and ‘resolute.’ Brian gained popularity in the Middle Ages Ireland during the reign of the last High King of Eire from 1002 to 1014. He is best remembered for defeating the Vikings. The addition of double ‘n’s in the spelling was developed later in the 20th century as an embellishment to the simpler Briana. The name was occasionally used in England from about the 16th century onwards, while Brianna, with its Irish influence, began to be used in the United States during the 1970s.

What Does Brianna Mean?

The meaning of Brianna can be ‘high,’ ‘honorable,’ and ‘virtuous’ in Irish. Some etymologists believe that Brian comes from an Old Celtic-Gaelic word bright, meaning ‘noble,’ while ‘high’ comes from the ancient Celtic element ‘bre,’ meaning ‘hill.’ The Celtic meaning of the name Brianna is ‘strong’ or ‘she ascends.’ Brianna means ‘daughter of God’ in Hebrew.

Brianna is a modern, feminine form of Brian. Originally, Brion, the masculine name dates back to the 9th century, and forms were used in Brittany, Ireland, and England from the Norman Conquest. Historians believe it first gained prominence in the 16th century with Edmund Spenser’s poem “The Faerie Queen’. This name is mainly popular among the Christians of the English-speaking world.

Brianna name variations are fascinating alternatives of the name that differ from the name in its particular external form. Here are a few other spellings for Brianna that might be considered transcending the barrier of language and culture.

How Popular Is the Name Brianna?

Varied Brianna versions are in the Top 1000 names in the popularity chart. Despite being old-fashioned, the Brianna baby name ranking became incredibly high in the late 1970s before falling in the popularity index in recent times. It entered the US list in 1976 before featuring in the Top 100 list in 1988. The name reached a rank as high as Number 14 in 1999. According to the Social Security Administration, it was the 146th-most popular name for girls in the United States in 2020. With the Country singer Trace Adkins calling his daughter Brianna, the name sounds more like a modern invention, giving inklings of positive growth in the Brianna popularity index.

Interest for Brianna in the search trend maintained a consistent value of over 60 over the last ten years, reaching 100 in February 2016. The lowest value recorded was 48 in December 2017 and October 2018.

Interest in Brianna – US

Search trends for the name Brianna have recorded a consistent search value of over 30, reaching 100 in July 2015. The lowest value was recorded in May 2019 at just 48.

Search trends for the name Brianna mirror maximum interest in the United States over the last decade. Countries like Canada, Ghana, Australia, and Puerto Rico queue up in the first five positions.

Search trends of Brianna – US

New Mexico has led the search trends among the sub-regions of the US for the name Brianna over the past decade. As per the latest records, Connecticut, New Jersey, Massachusetts, and Delaware have reached the top 5 positions.

Middle Names That Go With Brianna

Here are some of the amazing double names with Brianna that might take sound as an interesting choice:

Personalities who have achieved stardom are remembered due to their outstanding work in different fields. Parents inspired by the list of celebrities named Brianna can refer to the inventory given below:

Names that rhyme with Brianna can touch the heart with their poetic sound. A traditional name like Brianna can sound unique despite having the same phonetic effect:

Despite the squabbling, brothers and sisters share a bond of companionship that can be made stronger by choosing matching names. Here are some of the most distinctive sibling names that go with a name like Brianna:

Depending on the mood or occasion, nicknames can sound charming, sweet, or funny. Here are some of the most creatively conceived nicknames for the name Brianna that will help to enrich your bond with your child.

Brianna represents a freedom-loving and free-spirited individual who has an unlimited thirst for change and adventure. Being the name of a respected Irish King, Brianna is now associated with nobility and strength. For many American parents, Brianna evokes the image of a strong daughter and a go-getter. If you consider naming your baby Brianna, it is important to take note of the special meaning and history of the name as it will play a big role in the life of a child by establishing their identity.

Three Reasons to Care for Your Child’s Milk Teeth and Three Recommended Ways to Do So!

Can You Donate Blood While Breastfeeding?

Oily Skin During Pregnancy – Causes and Ways to Deal With It