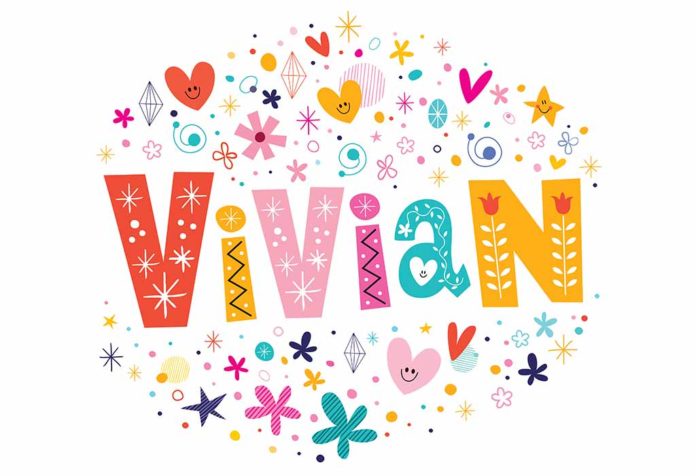 The name Vivian is unique. It rose in popularity from 1890; however, it declined in the 20th century. The lack of the name’s use does not do justice to this name. In recent years, the unique name gradually climbed up the baby’s name ranking.

What Does Vivian Mean?

Often parents evaluate the meaning of a name before finalizing a name for the child. Understanding a name’s meaning can help in choosing the perfect name. The meaning of Vivian is “lively” or “alive.” This indicates the beautiful meaning of the name, perfect for your little girl. The name is widely popular among Christians since it symbolizes life.

The name Vivian originates from the Latin word “Vivius,” which was derived from the word “Vivianus,” meaning “alive.” Vivian was also the name of a 5th-century bishop of Saintes who resided in France. The name was popular among the Normans, from where it was welcomed into England.

Different cultures and religions worldwide have diverse trends for the name Vivian. There are several other spellings for Vivian that denote the name’s cultural significance across other nationalities. This list includes some of the Vivian name variations:

How Popular Is the Name Vivian?

The name Vivian was popular in the 19th century. The name ranked among the top 200 names from 1890, with significant popularity in the 1920s. According to the Vivian popularity index, the name faded from popularity after 1950. Its reappearance in the popularity list in recent years indicates the inclination of parents towards this beautiful name. As per the Social Security Administration, the name ranked among the top 300 in 2000. With a decline in 2001 and its ranking to 312, the name picked up its pace from 2002 by ranking 249.

The steady inclination of the name upwards in the list suggests increasing use of the name. Vivian ranked 95 in 2015 and 2016. The name experienced a slight decline in 2018 and 2019, where it ranked 96, followed by 101 in 2020. The name has a significant scope to enter the top 100 baby names list, as observed in the name trend.

The interest in Vivian’s name has been steady over the last ten years. The name maintains a rank over 18, which is quite low. The interest of the name across the world reached its highest peak in December 2014, followed by April 2017.

Interest in Vivian – US

In the US, the interest in the name is consistent, holding a rank of over 30 in the last decade. The name’s interest peaked in December 2014, followed by July 2020. This indicates the gradual rising popularity of Vivian in recent years as per the name trends.

Popularity of the name Vivian

The search trends of the name Vivian indicate its popularity in Nicaragua in the last decade. The popularity of the name across the world can also be observed in Uganda, Singapore, Ghana, and Kenya, respectively.

Search trends of Vivian – US

In the US, the search trends of the name in the last ten years have been in Louisiana. South Dakota, the District of Columbia, New York, and New Jersey are the other countries where the name trend has been significantly popular.

Middle Names That Go With Vivian

Selecting a middle name for your child is as crucial as your child’s first name. By selecting a proper name, you can maintain the overall uniqueness of the name. Therefore, some suitable double names with Vivian are:

Names of celebrities have a huge influence on the trend of the name. Similarly, the name Vivian is also impacted by the celebrity influence. Therefore, some of the most famous people called Vivian are:

Baby names like Vivian have a wide variety. There are other names for Vivian that have similar meanings but are of different spelling. This list narrows down some of the similar baby names along with suitable family names for Vivian:

There is a diverse range of names that have similar-sounding alternatives. The same can be said for the name Vivian. Therefore, some names that rhyme with Vivian are:

Choosing sibling names that go with Vivian should be done selectively to ensure harmony among all your children’s names. The names should balance out one another. Hence, some of the suitable sibling names for Vivian are:

Nicknames have a special place in our hearts, especially because they are given by loved ones like best friends or family members. Some of the unique nicknames for Vivian are:

The popularity of Vivian has been slowly yet steadily rising in recent years. The name’s entry in the top 100 in the last five years indicates its increasing usage. In the upcoming years, Vivian can become an increasingly popular name chosen because of its meaning. This name is unique and one of a kind; therefore, it’s a perfect name choice for your bundle of joy.

Sometimes I Wish to Go Back to Feel Some Moments