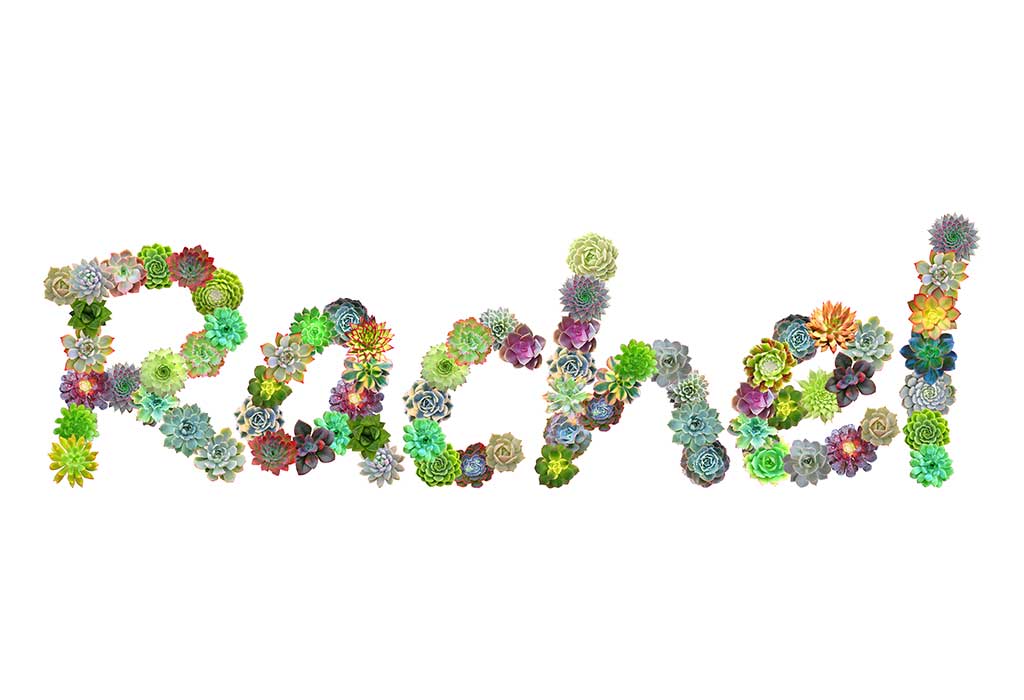 A girl’s name, Rachel, is of Hebrew origin and means “ewe.” Rachel was one of the two wives of the patriarch Jacob in Genesis – the first book of the Hebrew Bible. In the Bible, the younger and more provocative Rachel was the beautiful daughter of Laban, for the privilege of whose charms, the patriarchal Jacob served Laban twice, for seven years each. However, Jacob was beguiled into marrying the older and less desirable Leah after the first seven years of service. At first childless, Rachel eventually gave birth to Joseph and died giving birth to Benjamin.

What Does Rachel Mean?

Delicate and soft in its appeal, the importance of Rachel as a top biblical choice cannot be underestimated. Derived from the Hebrew word rāhēl, the meaning of Rachel is “ewe,” “female sheep,” or “one with purity.” Alternatively, Rachel is a topographic name derived from Middle High German rach, meaning “rough” or “steep.” Rachel can also be a pet form of a Slavic personal name or a habitational name such as Rachel in Bohemia.

In the Old Testament, Rachel was the favorite wife of Jacob and mother of Joseph and Benjamin. The name variations include Raquel in Spanish and Rahel in Israeli. Though the name was used mainly by Jewish families in Medieval Europe, it gained popularity among the Christians after the Reformation in the early 16th century. It was one of the first names from the Old Testament adopted by Protestants.

Commonly used in colonies like Episcopalian Virginia and Puritan New England, the 1850 United States census included 58,775 Rachels and 23,853 Rachaels, an alternative spelling influenced by “Michael.” However, it has climbed up to the Top 10 names in the US that show how parents of diverse backgrounds have fully embraced it. Although it’s not at the peak of its popularity, Rachel is still one of the most popular girls’ names starting with R and a classic girl name.

The phonetic characteristics condition the morphological adaptation of names in international variations. Here are some of the Rachel name variations and other spellings for Rachel that have evolved based on linguistic and cultural variations.

How Popular Is the Name Rachel?

Search trends data for the name Rachel show great interest that records consistent popularity of over 60 over the last five years, reaching 100 in June 2015. The lowest value recorded was 41 on September 2021.

Interest in Rachel – US

Search trends for the name Rachel have recorded consistent search popularity of over 40 in five years, reaching 100 in June 2015. The lowest score was recorded at 34 in October 2021.

The popularity of the name Rachel

Search trends for the name Rachel display the highest interest in Ireland over the last decade. Countries like the US, the UK, Canada, and New Zealand follow close behind. Despite being written thousands of years ago, Irish people still have a penchant for names found in the Bible, making Rachel a lasting favorite even in its variant as Rachael in the Irish language.

Search trends of Rachel – US

Among the sub-regions of the US, Massachusetts has led the search trends for the name Rachel over the last ten years. District of Columbia, New York, Vermont, and Connecticut follow close behind to occupy the top 5 positions.

Middle Names That Go With Rachel

Middle names can give the first name a serious competition as they offer choices to children to opt between the two. Some of the best double names with Rachel that may have a better appeal as a set of two:

Parents who look up to famous personalities get inspired by their achievements and name their babies after them. Here are some popular personalities called Rachel, who have earned wide public appeal:

Baby names like Rachel follow a similar pattern and provide a wide selection of choices for names. Family names for Rachel further help to glorify a person’s ancestral heritage. Some of the other names for Rachel that parents may favor:

Names that rhyme with Rachel carry the typical quality of the name in its phonetic form. A traditional name like Rachel can be modified into a trendier form to suit the modern sensibilities of new parents:

Sibling names can be twined to represent unconditional love between them. Some of the sibling names that best go with Rachel:

Nicknames can express heartfelt emotions that define the child in the sweetest possible way. Here are some of the most amazing nicknames for the name Rachel that are sure to win hearts:

This Christian name has ranked in the top 100 popular names in the United States, Canada, United Kingdom, Ireland, Australia, and Israel due to its Biblical association. For a little girl who is shy and meek yet disciplined and respectful to others, this name makes a worthy choice with its unique meaning.