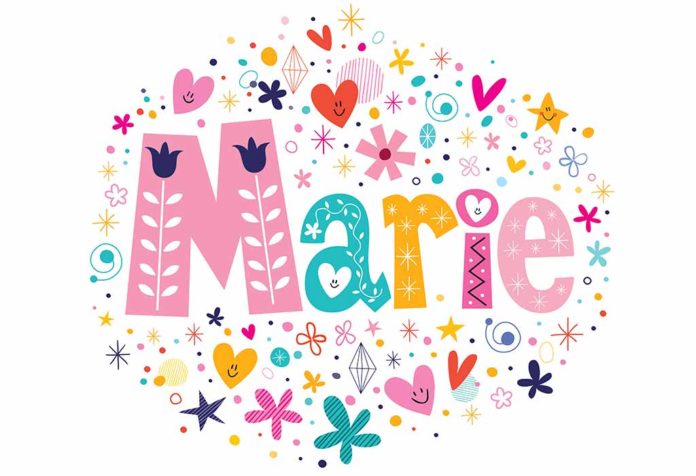 This popular French, German, Scandinavian, Czechoslovakian, and English female personal name of medieval origin comes from Latin Maria. The mother of Christ in the New Testament was named Marie, along with several other five other women characters. The Biblical Hebrew Miryam means ‘rebellious’ or ‘wished-for child.’ The Egyptian root mrj or ‘myr’ meaning ‘beloved.’ It can also be a compound of mar ‘drop’ yam ‘sea’ or Latin Stilla Maris or Stella Maris, meaning ‘star of the sea.’

What Does Marie Mean?

Mary Magdalene was one of Christ’s favored followers in the Bible. The Hebrew name Marie is derived from Miryam, which comes from the Egyptian element “my,” meaning “beloved.” Miryam was Moses’s sister from the book of Exodus, which means “rebellious” and “wished-for child.” The meaning of Marie can also be understood as ‘drop of the sea’ and ‘bitterness’ originating from the Hebrew word Marah. Marie is a nickname for a newly married man in French, which comes from marier, meaning ‘to marry.’

Derived from Aramaic Maryam, the vernacular forms of Marie have been influenced by the Roman family name Marius. Marie is the French alternative of the Latin name ‘Maria’ and English name ‘Mary,’ while ‘Miriam’ and ‘Miryam’ are its Hebrew variants. This name has been widely used in Germany, Denmark, Austria, France, and Norway. Due to the importance of Mary among Christians, it was not used until the Middle Ages. The earliest English form of the name was revived in the 19th century by deriving from the ubiquitous French version. It has various linguistic variations, making it one of the most successful names for girls down the ages.

A traditional Biblical name like Marie has international variations that qualify as classics too. Here are some Marie name variations and other spellings for Marie that are frequently used in numerous languages.

How Popular Is the Name Marie?

The Marie popularity ranking was in the top 10 names from 1901-1904 in the US and remained among the top 15 names until 1925. Although its popularity has waned after that for a while, it remained among the top 100 names for girls until 1958. The Marie baby named ranking reached 619 in the US and remained in the top 100 in France by 2020. However, as per the modernization theory of name trends, choices of names are becoming free of traditions. With the growing cultural value of individuality and diversity, more uncommon variations of Marie are being used today.

Over the last 10 years, search trends for Marie show consistent popularity of over 70, scoring 100 on the popularity scale in Jan 2019. The lowest interest was recorded in July 2021 at just 65.

Interest in Marie – US

Public interest for the name Marie shows a consistent search value of over 55 reaching 100 in Jan 2019 over a period of 10 years. In July 2021, the lowest popularity was recorded at just 52.

Popularity of the name Marie

Search trends show that the name has been searched the most in Reunion Island in the last 10 years. Countries like Guadeloupe, Martinique, France, Cote d’Ivoire follow to round up among the top 5. Since Marie is the standard form of the French version of Jesus Christ’s mother Mary, it is popular in Reunion, where a vast majority of its population practices Roman Catholicism.

Search trends of Marie in the US

Most searches for Marie have been recorded over the last 10 years in the Michigan, Nevada, Louisiana, New Jersey, and California sub-regions of the US, respectively.

Middle Names That Go With Marie

The tradition of inserting middle names mostly after a saint into a child’s moniker followed by a surname began in the middle ages. Here are some of the double names with Marie that helps to maintain its appeal in a fresher way:

Celebrities tend to have trendy and Avant-Garde names that set them apart from the crowd. Here is a list of famous people called Marie who have remained popular over the years:

Baby-names like Marie that sound similar or rhyme with each other captures the smoothness of this name. Family names for Marie need to evoke religious sentiments considering its Biblical association, making it flow well in the process. Here are some of the other names for Marie that may make meaningful choices for new-age parents.

If you’re looking for something that has a similar ring to Marie, here are some names that rhyme with Marie that differ in tone and spelling but capture the same refinement:

You can match up sibling names with kind of combinations to create a sense of unity. Here is a list of some of the most suitable sibling names that go with Marie:

Nicknames represent a familiar alternative for a proper name that describes a person’s qualities and are used as a term of endearment. Here are some of the unique nicknames for the name Marie:

A distinguished and elegant name like Marie is undeniably important both spiritually and culturally for the English-speaking countries worldwide. Even if it may not be considered exactly as a stylish baby girl name, the name continues to carry an aura of sophistication and femininity that lends it an enduring appeal.