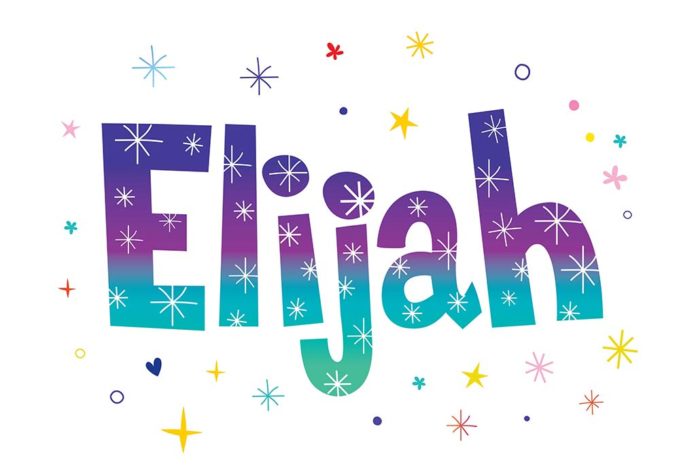 Elijah is a Biblical name that came into prominence in the 9th-Century BCE. The Hebrew prophet Elijah lived in the northern kingdom of Israel during the reign of King Ahab. He was a miracle worker who saved the religion of Yahweh from being corrupted by the nature worship of the Canaanite deity Baal. The name Elijah means “Yahweh is my God.”

What Does Elijah Mean?

This profoundly religious Welsh, Jewish and American name comes from the personal name Elijah. Derived from the Hebrew name Eliyahu, it is also the English transliteration in the King James Bible or the Old Testament, meaning ‘Jehovah is God.’ After combining El meaning ‘God’ and Yah meaning ‘Jehovah,’ the meaning of Elijah becomes ‘God the Lord’ and ‘the strong Lord.’

Elijah is found in the Old Testament or Hebrew Bible, specifically in the First and Second Books of Kings – the one who ascended to heaven in a chariot of fire after working as a messenger of God. Likewise, Elijah is a prophet who appears at the Last Judgment in Islam. Elijah’s name is invoked in Judaism, during the Havdalah rite that marks the end of Shabbat, and in other Jewish customs like Passover Seder and the brit milah. As the name appears in the New Testament, the Quran, the Mishnah and Talmud, the Doctrine and Covenants, the Book of Mormon, and BaháÊ¼í writings, it has been revered by Jews, orthodox Christian, Catholics, and Muslims alike down the ages.

Different cultures use different naming patterns for first names that can be abbreviated, contracted, or converged over time. Here are some of the Elijah name variations and other spellings for Elijah that has evolved in varying languages:

How Popular Is the Name Elijah?

After a brief lull during the 16th century in Medieval England, the name Elijah was revived after the Protestant Reformation by the Puritans inspired by its Latin form Elias. According to Social Security Administration data, after joining the league of top 100 boy names in the US in 1995, Elijah baby name ranking reached the top 50 names in 2001 and top 20 in 2010. It managed to obtain its spot among the top-10 name for boys in the US since 2016, and finally, the Elijah popularity ranking reached the 4th position as per the 2020 statistics in America.

Search trends data for the name Elijah has recorded consistent search popularity of over 20 over the last decade, reaching 100 in June 2020. The lowest value on the popularity scale was recorded at 23 in October 2012.

Interest in Elijah – US

Over the last ten years, interest for the name Elijah has recorded consistently low popularity, reaching 100 in October 2019. It, however, managed to accumulate a score of just 14 on two instances in October and November 2012.

Interest through the trends shows a positive value most in Zambia in the last ten years. Countries like Nigeria, Ghana, Kenya, and Zimbabwe follow close behind. This can be attributed to most African countries being Christians by faith. Biblical names like Elijah have been widely used for boys since medieval times and later with the missionaries arriving in the country in the 19th century.

Search trends of Elijah in the US

Middle Names That Go With Elijah

A meaningful middle name gives the option of picking between combinations when you can’t decide which is the best. Some suitable double names with Elijah that has become popular and are an accepted part of many cultures today:

Celebrities bring weird, cool, and new names to the baby naming table. Parents looking out for a distinctive moniker to name their baby can refer to the inventory of  celebrities named Elijah that can make them reach for the stars:

Although unrelated in origin or meaning, names that sound relatively similar get attention due to their unique qualities and appeal. Baby names like Elijah can have attractive alternatives that may be unrelated in origin or meaning. Family names for Elijah can have an equally aristocratic vibe. Here are some of the other names for Elijah that has a chic old-world feel:

Names that rhyme with Elijah sound equally sweet and attractive as the name itself. Here are some names that sound like Elijah and can be considered for your baby boy:

Sibling names can be paired together to make a match made in heaven. Here are some of the most suitable sibling names that go with Elijah:

Nicknames or pet names can bear your love and show how much you care. Here are some of the nicknames for the name Elijah that will add to your child’s personality:

A classic name like Elijah represents the spiritual essence of its meaning. The soft, gentle sound of the vowels and soft consonants are mimicked well in the name that is destined to make its way into the hearts of all parents looking for an all-rounded memorable name for their little one.

4 Weeks Pregnant with Twins or Multiples

Child’s Psychology – What Do Your Child’s Drawings and Scribbles Mean?

15 Best Home Remedies for a Toothache