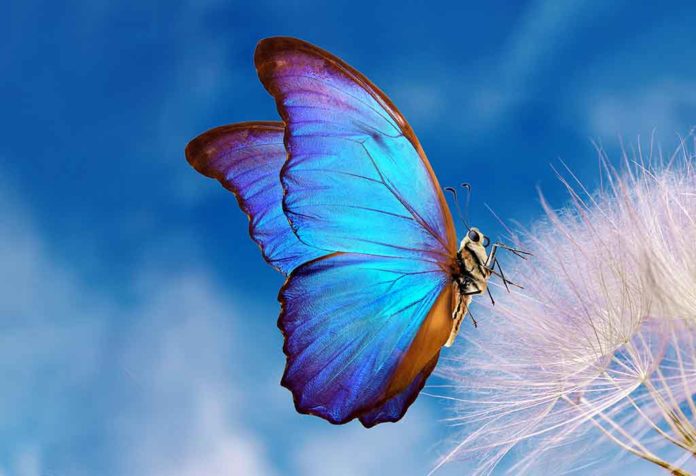 Butterflies are not just aesthetically appealing insects but represent change, freedom, strength, hope, and personal growth. Their short yet fascinating lifespan mirrors the spiritual transformation and transitory nature of happiness in life. A symbolic creature in many cultures, butterflies undergo metamorphosis from an unattractive and straightforward caterpillar to an enchanting winged organism that comes in a wide variety of iridescent colors, bright patterns, and fancy shapes. Traditionally, the butterfly is also closely associated with femininity and romantic love. While naming a child, parents often want to name their child after something beautiful and pleasing to the eye.

There are numerous species of butterflies found in almost every country across the globe. These fluttery species have an aura of profound mystery about them that contributes even more to their beauty. The image of butterflies was used in Egyptian frescoes in Thebes over 3,500 years ago. It represented the goddess Psyche (“soul”) with having butterfly wings for the ancient Greeks. Both the Greeks and the Romans equated the souls of deceased loved ones with butterflies. We also find that butterflies represent the personification of a person’s soul, marital bliss, and womanhood in Japan.

A butterfly is considered one of the wildlife spirits known as ‘Kachina’ as per the Hopi culture. Aztecs believed that Itzapapalotl is a divine being represented by the Obsidian butterfly. The butterfly is called ‘hu-tieh,’ meaning 70 years in Mandarin Chinese, referring to long life. In some parts of the United States, they are viewed as a sign of good fortune, although black butterflies are considered as impending death. These motifs are used purely for their aesthetic qualities in visual art rather than for religious symbolism for centuries. Several surviving mosaics show that butterflies have been associated with regeneration and renewal due to their changing forms through biological evolution.

Growing in popularity since the 2010s, the use of butterfly names have peaked steadily in 2018, with 0.253% of baby girls bearing such names. Several genera of butterflies originate as first names, and they are translated into different native European languages. When celebrities choose pretty butterfly names for their little ones, butterfly-related baby names come to the spotlight and get wider attention. However you interpret the butterfly, this powerful metaphor can add color to your child’s identity and boost their confidence for self-expression. In case you’re losing sleep over selecting a name for your newborn, this curated list of butterfly baby names for both boys and girls can come to your rescue.

If you thought that butterfly names were only for girls, you might be pleasantly surprised by the number of butterfly boy names that set them apart from their peers. Here is a compilation of the most popular baby names for boys will suitable meanings that carry a sense of wonder and creative spirit.

This name of Greek origin means “handsome” and belongs to the eternally youthful god.

Aglais is a beautiful multi-colored butterfly. The name comes from Latin “Aglaia,” which comes from the ancient Greek word meaning ‘splendid,’ ‘shining.’

Argus is a slightly bluish or brown Eurasian butterfly and means ‘bright’ in Greek. In Greek mythology, Argus means a 100 eyed monster or a watchful guardian.

This English name means “ivy, blue color” associated with the colors of the butterfly.

This trendy name means “Butterfly,” which also refers to Japanese flowers of the same name.

This is a beautiful butterfly known for its ability to fly at high altitudes. This name translates to ‘poetry’ in Latin.

A short for of Clifford, this topographical English name means ‘cliffside ford.’

Derived from the old French and Latin “Constantin,” this name means ‘constant’ or ‘steadfast.’ It belonged to the first Christian Roman Emperor, Constantine, the great.

The name means ‘someone who urges on horses, charioteer, or a rider.’ Danaus is the great-grandson of Zeus in Greek mythology. Adorned with tiger-like stripes on its wings, it is a type of butterfly.

This Biblical refers to ‘gazelle’ in Greek origin.

Derived from Irish Fionn, Finn means “white” or “fair.” It is a variety of rainforest butterflies.

Widely used in Kosovo and Albania, Flutur translates to ‘moving along rapidly and lightly.’

Derived from the word Parvâneh, meaning “butterfly” in Persian.

This red and black butterfly gets its name from Scottish origin and means “a king’s servant.”

Hecate means a butterfly or a soul. Hecate is also known as the God of the week and is said to have wings like a butterfly as per Greek mythology.

This Aztec name comes from ÄªtzpÄpÄlÅtl, the name of an Aztec god known as Obsidian Butterfly.

Jamides is a variant of Jamais, a beautiful butterfly found in the Indomalayan realm. The name also means lover of glades.

Jay means ‘the holder,’ ‘healer,’ ‘triumph,’ and ‘victory’ in Sanskrit. It is also the name of a tropical butterfly with green spots on black-based wings.

This Hawaiian origin name means “the one set apart” and refers to the Kamehameha butterfly.

According to mythology, this Greek name means “liberator, freeing men” and belonged to the name of Spartan admiral.

With roots in Latin, American, English, and Greek languages, Leander means ‘lion man.’ According to Greek mythology, Leander is a butterfly and a handsome young man who was the priest’s lover as a hero.

Leptir means butterfly according to the Russian dialectal. The monarch butterfly is also known as a milkweed butterfly. It means the one who urges on horses according to Greek mythology.

This Middle English name means “King.” The monarch butterfly is a variety of butterflies.

This name of Ethiopian origin means “butterfly.” According to the ancient Greek Origin, it means ‘soul.’

Memphis is the Greek form of the Egyptian name Mennefer. It is a type of butterfly that has wings resembling dead leaves. It means ‘beautiful,’ ‘established,’ and ‘enduring.’

Morgane is a name of Welsh origin and means ‘dweller of the sea’, ‘sea chief,’ or ‘great brightness.’ It is also a blue butterfly with a white stripe.

According to the ancient Greek origin, Orion is the name of a hunter and refers to a constellation of stars or a type of butterfly.

This German name means “an active young man.” Piepel is the name of a moth and butterfly species.

This name of Samoan origin means “butterfly.” Pepe is a pet form of the Spanish name José which comes from the Hebrew Yosef, through the Greek Iosephos and Latin Iosephus, meaning “God will give.”

Smith is a sub-species of a blue butterfly. This name comes from the Anglo-Saxon smitan, meaning “to smite or strike.”

This name of Latin American origin refers to a yellow-hued butterfly. It is most suitable for a baby boy born under the sign of Tauras.

This Biblical name appears in the seventh book of the New Testament and means “honorable.” He was a Greek disciple and the helper of Saint Paul.

Thecla is the name of a butterfly mostly found across Eurasia north on the foothills of the Himalayas and North Africa. This Greek name means “God’s glory.”

Ulysses is the Greek mythological hero Odysseus, who was the hero in Homer’s epic poem ‘Odyssey.’

This name of Middle German origin means “butterfly.” The meaning of this given name represents innovation, independence, determination.

This name of Aztec origin refers to “God of spirit,” who had butterfly wings.

Xenocles is a famous fifth-century Greek poet. It is also the name of a butterfly species found in Southeast Asia. 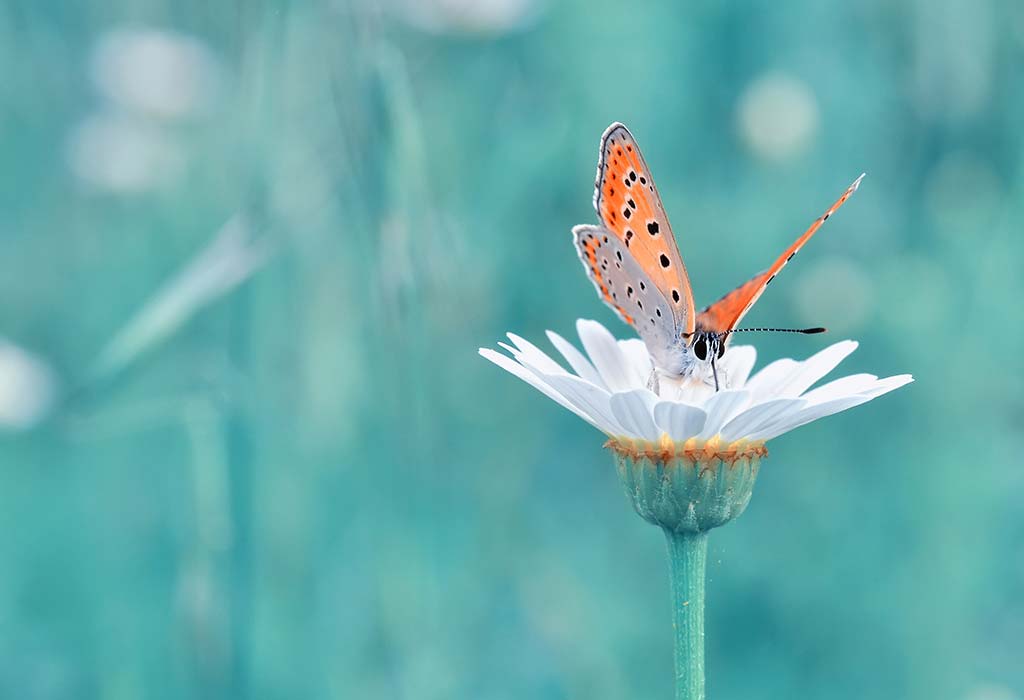 Finding the perfect name for your daughter can be exciting yet challenging or even overwhelming at times. Here are some of the best butterfly names for girls that can add a dash of magic with their beauty and charm to their personalities.

This English name is a composition of Hebrew Anna, meaning ‘grace,’ and French belle, meaning ‘beauty.’

The Greek Alexandra is the female form of Alexandros, which comes from alexein, meaning “to ward off, keep off, turn away, defend, protect” as aner means “man.”

Adelpha is a classic girl’s name of Greek origin which means “beloved sister.” It is also the name for a genus of butterflies.

The name of the butterfly genus comes from the Latin “Aglaia,” which comes from the ancient Greek mythological character Aglaia, the youngest of the three Charities (Graces), who personifies dazzling beauty and splendor.

Derived from the Latin beatus, this name means “blessed.”

This name means “butterfly” or ‘flower’ in Japanese.

This Greek name means “cacoon” and “golden.” It comes from the Greek word chrysos – gold, referring to the color of the hard shell that protects them during this stage of development.

Cressida is a pretty mythological and Shakespearean heroine and means ‘gold’ in Greek.

Limenitis camilla is a butterfly of the Nymphalidae family. It means ‘helper to the priest’ in Portuguese. It means ‘young ceremonial attendant’ in Latin.

Delphia is a butterfly species that means “the womb.” It is a feminization of the Greek place name Delphi.

Polyura dolon is a subgenus of butterflies found in India. It means ‘scent of a beautiful white flower.’

Lycaena Dorcas is the gossamer-winged butterflies found in North America. It means Gazelle in Greek and refers to someone abounded in good deeds and gifts of mercy in The New Testament.

Derived from Greek, Latin, and Indo-European origins, Diana means “Divine.” Diana was a Roman goddess of hunting, forests, the moon, and fertility.

This English name means “riches or blessed” or ‘prosperous in war.’

Derived from the Latin word aemulus, Emilia means ‘to rival,’ ‘excel,’ or ‘emulate,’ from folk etymology. It means ‘butterfly’ in Greek.

This name is of Hebrew and Scottish origin, means “God is gracious.”

Kalliope in Greek means “beautiful voice.”  Its variant Calliope was the muse of epic poetry in Greek mythology.

This Arabic name means ‘butterfly.’ It means “light,” “a ray of sunlight,” or “beautiful girl” in Persian.

A type of butterfly, this name of Greek origin means “enduring.”

Phaedra is an ancient Greek name deriving from “phaidros,” meaning “bright, glowing” Phaedra was the demi-goddess daughter of King Minos of Crete and wife of King of Athens.

This name of Native American origin means “the playful one.”

Titli is an Indian Hindu girl’s name that means “A butterfly.”

Posey is a short form of Mariposa referring to a bunch of flowers.’

A traditionally feminine name with Latin origins, Vanessa means “belonging to Venus,” the god of love. It refers to the mystic Greek goddess Phanessa, who had a fascination for butterflies.

This name of Arabic origin means “small butterfly.” Yara was a beautiful green-skinned Brazilian goddess. The term also refers to honeycomb and honeysuckle in Hebrew.

Greek origin and means “shining. ” It means ‘beautiful’ and secret spirit’ in Arabic.

Butterflies are natural entities that convey a special meaning. Having existed on Earth long before humans, butterflies have appeared in the different myths and folklores to intrigue us since time immemorial. Just as butterflies have such a magical presence and quality that draws instant attention, butterfly baby names carrying messages of change, transformation, hope, and positivity can make them stand out in the crowd.

3 Reasons Why Babies Cry Before Sleeping

Don’t Forget To Do These Things For Yourself While Nursing

Getting a Positive Pregnancy Test After a Miscarriage – Is It Normal?