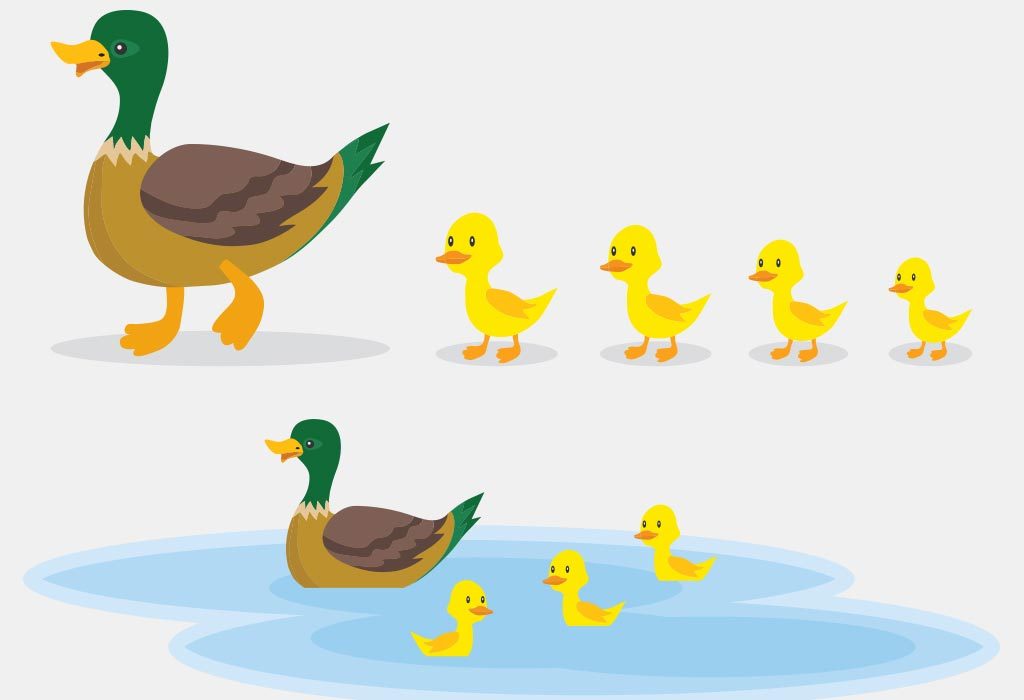 Ducks are interesting birds; they can fly in the air, waddle on land and they can swim in water; there aren’t many animals that can do all that. Closely related to geese and swans, these birds are smaller with shorter necks. In popular culture, ducks are yellow with their well-known “quack!” sounds; in reality, ducks are varied in the colour of their feathers and the sounds they make.

Here are some essential duck facts for preschoolers:

1. Ducks Have a Cosmopolitan Distribution

What this means is that ducks are present almost everywhere on Earth! Most ducks occupy the major continents in both the northern and southern hemisphere. Some duck species from the Northern Arctic hemisphere and in the temperate regions are migratory; they fly to warmer places in the breeding seasons to lay eggs. Ducks in the tropics are not migratory in general. In dry places such as Australia where rainfall can be unpredictable, they seek out temporary pools that form after heavy rains. Some species of ducks are also found in sub-Antarctic islands such as the Auckland Islands and South Georgia. Some have managed to colonise islands such as Hawaii and New Zealand.

Ducks are omnivores; they feed on a number of food sources such as aquatic plants, grasses, insects, fish, worms, small amphibians and small molluscs. The dabbling ducks feed on land or shallow water where they up-end without completely submerging to reach for anything they can grab with their beaks. Their beaks have a specialized comb-like feature called pectin along the edge. The pectin traps food and grip slippery prey and is highly useful for preening their feathers.

Diving ducks in both freshwater and sea are able to submerge easily to catch prey deeper in the water. They are also built heavier for the purpose and hence have a slight disadvantage when it comes to flying. A few species are specialized to catch and swallow large fish. Many other fresh water species have beaks adapted for dredging at the bottom of lakes and pond looking for worms, molluscs, waterweed and insect larva.

It’s important to note that while ducks eat the bread crumbs people commonly give them, it is not their natural food and damages their health.

3. Ducks Have Many Predators

Being birds, they have many predators. The ducklings are especially vulnerable because of their inability to fly, making them easy prey for animals such as feral cats, dogs, large fishes, crocodiles, snakes and herons. Their nests are also raided by many predatory animals on land, and brooding females are sometimes caught by surprise by cats, foxes, eagles and owls. The adult ducks, despite being good fliers, are also sometimes caught by crocodiles and large fish. In the air, they can be attacked by falcons and hawks. Other than their natural predators, hunters are also a threat to ducks.

Female ducks build nests in the breeding grounds where they hatch as well. The nests are built with twigs, reeds, grass or holes in trees. The male ducks attract the females with their colourful feathers, and the females lead them to their nests. Males also guard their nests against other pairs that might try to take over. Females lay 5-12 eggs at a time and sit on them to keep them warm while the males are away with other males. Ducks’ eggs take about a month to hatch, and the mother protects the ducklings while they are vulnerable. They are able to fly in 5 to 8 weeks time.

Other Amazing Facts about Duck for Children

Here are some amazing facts about ducks that are sure to surprise kids:

Ducks are interesting birds; they have evolved some amazing ways to keep themselves well adapted to living around water bodies. They are fun and adorable creatures, whether wild or domesticated.