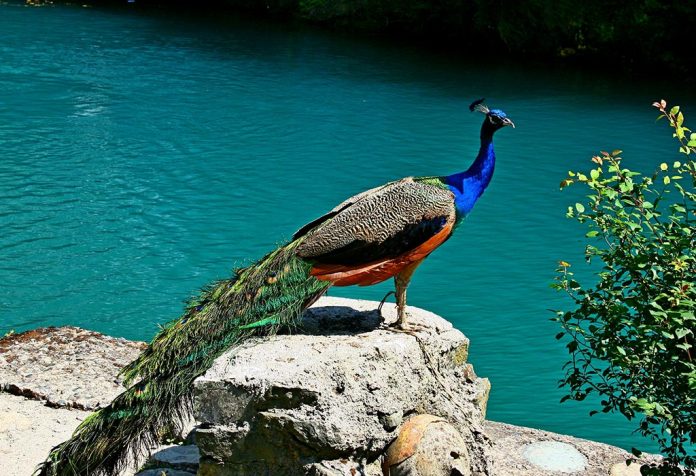 We are a fortunate country to have the peacock as our national bird. The beauty of a peacock is unparalleled, and many merely dream to see a peacock dance when it attempts to welcome the rains. Telling these different peacock details to a child can help him look it not just a bird, but a beautiful creature with numerous exciting aspects surrounding him. Taking him to a zoo or showing him videos of a peacock on the Internet can help him understand the bird better and get to know more about peacocks interestingly.

We have helped put together a few amazing facts related to peacocks, some of which you might be already aware of, and some that you might be reading for the first time as well.

Peacocks that are present in the wild by themselves are at constant risk from different predators and harsh weather, which limits their overall lifespan to about 20 years or so. However, peacocks that are in the zoos or other controlled environments do tend to live for as long as 40 years. Unlike ducks and other birds, peacocks cannot enter the waters and swim. Their feet are meant to hold on to the land firmly and do not have the presence of webbed skin between their toes, which facilitates other water birds to swim around. Their feathers too are of no use in the water.

Peacocks have a number of variants in them but not all of them have as beautiful a plumage as the Indian peacock. The Indian peacock is one of the only species that has such a spectacular collection of feathers, which it displays with aplomb and creates a gorgeous pattern.

The peacocks in the wild face numerous dangers from different animals around their environment. For the ones present closer to the villages, dogs, cats and other animals tend to attack peacocks when they are spotted. In the forests, tigers and other wild animals stalk down the peacocks to attack them. Here is one of the most interesting white peacock facts for kids. Generally known for their colourful plumage, few peacocks are manually chosen to breed selectively, giving rise to female peacocks that have feathers without any colours. These are called white peacocks.

The calls of the peacock are prevalent among the village people or even when you go for forest safaris. Most calls are indicative of a predator’s presence, but peacocks do tend to make fake calls just for fun. Even mating calls are made to tease the female peahens. They tend to make a lot of sounds when they feel threatened or are irritated.

Although peacocks are observed in the wild, there are certain areas where peacocks are treated as domesticated birds. These are generally regions where the weather does not reach extremities. Having an open paddock with enough space for each peacock can help keep them happy and energetic. The plumage of the peacock is an absolute stunner, and a lot of people demand to have those feathers for themselves, thus leading to the culling of the peacocks, but this isn’t necessary at all. Peacocks tend to shed all their feathers once the breeding season ends, and you can acquire all of them off the ground, without disturbing or killing the bird.

The peacock has a significant place in the Indian culture and mythology. These birds are considered to be representations of humility and benevolence. A lot of gods and goddesses are associated with peacocks, such as Saraswati in Hindus, Hera in the Greeks, and even as a symbol of immortality in the Christians.

Peacocks don’t stick to a single partner and tend to mate with multiple peahens during the breeding season, in a group of twos of threes. Although you might generally observe peacocks to be dawdling around in the zoos, they are known to run quite speedily in open areas, reaching speeds of 16km/hr and even flying about for a few minutes.

Peacocks display their plumage and dance to attract the female and mate with her. The female then forms a nest and lays 3-6 eggs at a time. They hatch in a month’s time and stay with the mother till they grow up.

Peacocks are extremely loud and get easily irritating after a while. In the rains, they tend to make meowing sounds to indicate threatening clouds. There are around 11 different sounds that a peacock can make. Peacocks are usually quite social and domesticated ones even interact with humans they know pretty well. They are shy as well and will attack any stranger or even a new bird in their vicinity. They also indulge in various games with each other, chasing around, and also prefer to sit on treetops.

People usually domesticate peacocks for their ability to catch snakes and feed on them, even poisonous ones. Thus peacocks keep the village safe.

The colours in the feathers of the peacock are a result of the presence of various crystalline structures that are microscopic in nature. These end up reflecting the light and give rise to beautiful colours. Peacocks can fly but only for limited distances. They prefer staying on the land and fly only when trying to escape a predator or attempting to reach a treetop to sleep through the night.

Peacocks are omnivores and tend to eat everything from plants, seeds, flowers, ants, grains down to young snakes, frogs, butterflies, mice, and so on.

Peacocks prefer living in forests and areas that are open with some low trees around. Naturally, most of them are present in India, Burma and Sri Lanka. Other regions have captured peacocks to increase their population.

Hunting and absence of proper habitats have resulted in the reduction of peacocks. Indian peacocks are highly protected and safe, whereas Congo and Green species of the peacocks are rather endangered.

Teaching many Indian peacock facts for kids is essential so that your child is aware of the bird’s nuances. Knowing why it is necessary to protect such birds can help him become more caring and informed towards other animals around him and be a better individual.

How to Engage Toddlers at Home – 42 Indoor Activities, Part 2

A Plate Full of Health and Happiness