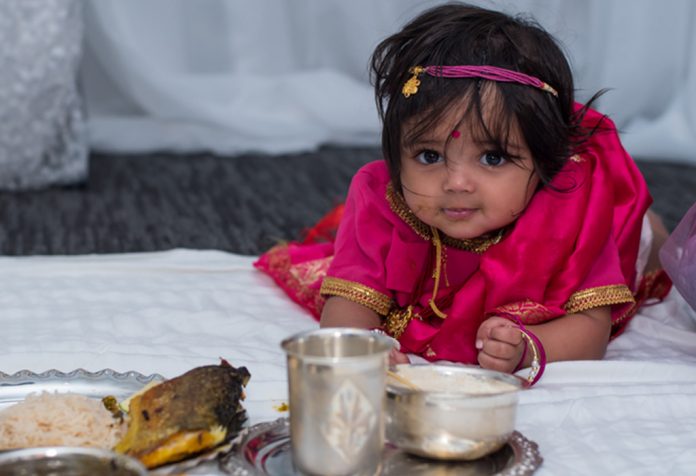 Babies are fed breast milk until around six months of age, after which it’s recommended to start feeding them solid foods. As this is a momentous occasion, especially in Hindu tradition, this event is often celebrated in the form of a traditional ritual known as Annaprashan.

Annaprashan or ‘rice initiation’ is a popular Hindu custom that marks the baby’s transition from consuming liquid foods to solids. Annaprashan is performed across India and is known as Mukhe Bhaat in West Bengal, Choroonu in Kerala, and Bhath Khulai in the Garhwal hills of Himachal Pradesh. After this ritual, the baby is weaned off breast milk and will begin to consume only solid foods.

Why Is the Annaprashan Ceremony Performed?

The Annaprashan ceremony signifies the next step in the baby’s growth. Dating back to the Vedic ages, Annaprashan is known to be practised in South Asia and Iran. Depending on the culture or region the parents are from, it can take place anywhere between five and nine months of age. Traditionally, babies below four months or above one year do not undergo Annaprashan. The importance of this ritual is such that the event includes several guests, a large venue, and food catering. Priests are present to conduct the Annaprashan mantra at the auspicious time chosen for the occasion.

Where Is the First Rice-eating Ceremony Performed?

Annaprashan used to be initially conducted at home. However, these days, people prefer to rent a venue like a banquet or a party hall for the ritual. Annaprashan can also be performed at a temple to obtain the blessings of the family deity. It lasts for one day but can be extended to two if the parents wish to have a more elaborate celebration with fun and games.

The Annaprashan ceremony starts with the baby being seated on his maternal uncle’s lap, who is supposed to give him his first solid bite. After the baby eats the initial serving, the other family members feed him more food and shower him with gifts. Items such as gold jewellery, pens, books, clay, and food are placed in front of the baby, who is required to choose one item from these. His choice represents his area of interest in the future.

Types of Food Offered to the Baby

Apart from the first bite of rice, there is a large variety of food that is offered to the baby during the Annaprashan ceremony. Some of them are:

Why Is Kheer or Payasam Important in Annaprashan?

Traditionally, rice is upheld for its life-sustaining qualities, and hence is a part of all religious functions. Consequently, kheer (a sweet rice dish) became an important part of all religious rituals. The shwet (white) colour of kheer, which was seen as a symbol of purity and divinity, also worked in its favour. Kheer or payasam is the first solid food fed to a baby, and hence is an integral part of Annaprashan. It’s generally prepared by the mother or grandmother and served to the baby in a silver vessel.

As your baby is still very young, some precautions must be taken when introducing him to solid food.

Tips for a Safe and Memorable Annaprashan Ceremony

The Annaprashansanskar is a safe ceremony, but please ensure you follow the following tips, so that the event is fun for everybody.

Annaprashan is an important event in your baby’s life and is the first step of several your baby will take in his life’s journey. It’s a reminder that your baby is growing up. So, go ahead and make this occasion of your little one’s life a momentous one!

7 Qualities ALL Good Neighbours Have – How Many of These Do You Have?