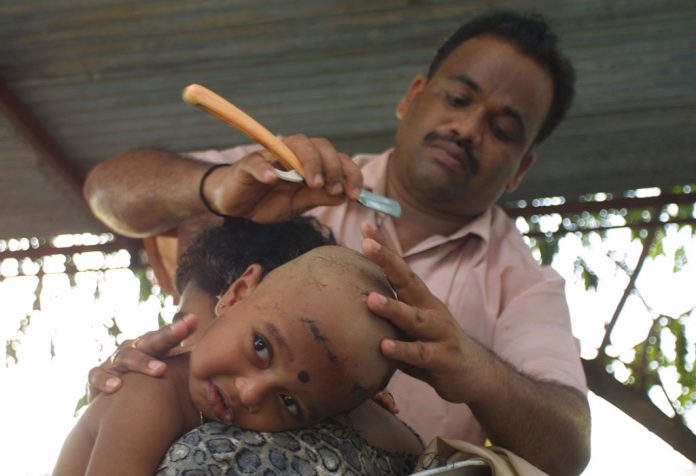 The mundan or head-shaving ceremony for children has been a part of the Indian culture for many years. It is one of the traditional rituals followed in Hindu culture and has a lot of hidden references and significance attached to its existence. The mundan ceremony is often regarded as a very important part of a child’s growing years, and hence, it is given a lot of thought and effort and is done with the utmost care.

What Is Mundan Ceremony For Babies And Kids?

The baby mundan ceremony or “mundan sanskar” is a popular traditional ritual in India that is carried out with auspicious beliefs. The Hindu mundan ceremony is a ritual where a child’s hair is completely shaved off and given as an offering to the Gods.

In the Hindu culture, it is strongly believed that shaving a child’s first full head of hair purifies the child and rids him/her of any evil eye or evil presence.

There are a number of other beliefs behind this practice too. Read on to know more.

When Is Mundan/Head Tonsure Done?

For the mundan ceremony, the child’s age usually varies between 1-3 years of age (it is mostly done when the child is 7, 9 or 11 months old), but some people prefer to do it at a later age as well. For this ceremony, the child has to have the first growth of hair. That fact that shaving the first hair guarantees better growth has a good amount of scientific reasoning behind it. Hair growth, in general, is quite scattered in young children, because they are still at the initial stages of development, and the process of absorbing necessary nutrients for their growth is still picking up pace.

When a baby’s hair grows for the first time, it is not very strong. The hair follicles are also scattered. When the weak hair is shaved off, there is room for new hair that has stronger hair follicles to grow out of the roots and the hair growth pattern is no longer scattered or messy. Therefore, the baby’s hair growth after mundan is certainly better, denser and stronger too.

Tips And Precautions For A Safe Mundan

This ceremony is a risky one and has to be done with certain precautions in mind. Here are a few important things you must take care of before your child’s mundan ceremony. The mundan ceremony has a lot of value and meaning attached to it, which is why many families even today continue to make it a part of their traditions. Apart from the spiritual reasons, this practice does have its own benefits and advantages for the child. Just ensure that you follow all the necessary steps and precautions to make the mundan ceremony a safe and memorable occasion for the family.

What To Expect At Week 37

Mixing Home Cleaners Can Be Disastrous!