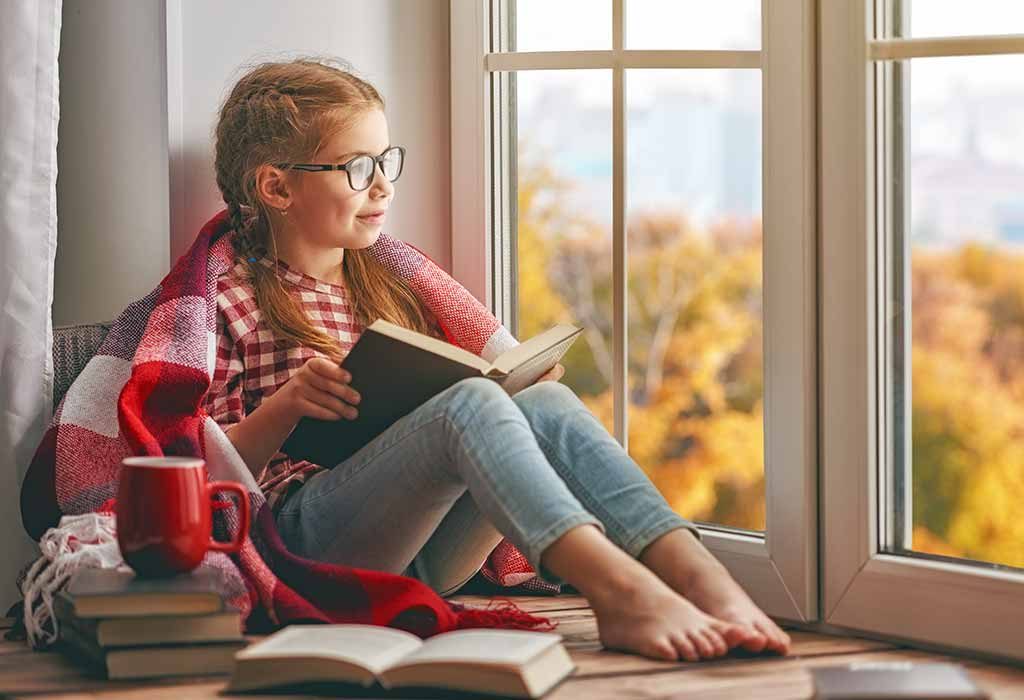 Young kids learn quickly, so to teach them expression, creativity, sentence structure and more, start by teaching them poems. Autumn poems for preschool kids create strong sight word recognition in children. It is easy for them to associate the words in the autumn poems for children with things they see around them during the season. Repeating the poems multiple times helps them associate words with images, learn sentence structure, and more. September and October poems for kindergarten kids make the kids fall in love with the autumn season.

Teaching kids them poems is the most convenient way to help them learn new words and pronunciation. Reciting poems also improves fluency and teaches them proper expression.

So here are some of the best fall poems for children:

Five Little Pumpkins sitting on a gate,
The First one said “Oh my it’s getting late!”
The second one said “There’s a chill in the air.”
The Third one said “But we
don’t care!”
The Fourth one said “let’s
Run and Run and Run.”
The Fifth one said “I’m ready for some fun.”
Oooooooo went the wind.
and Out went the lights!
And the five little pumpkins
rolled out of sight!

Taking a walk is so much fun.
We don’t hurry;
we don’t run.
We watch for birds; we watch
for bees.
We look for all the falling leaves. 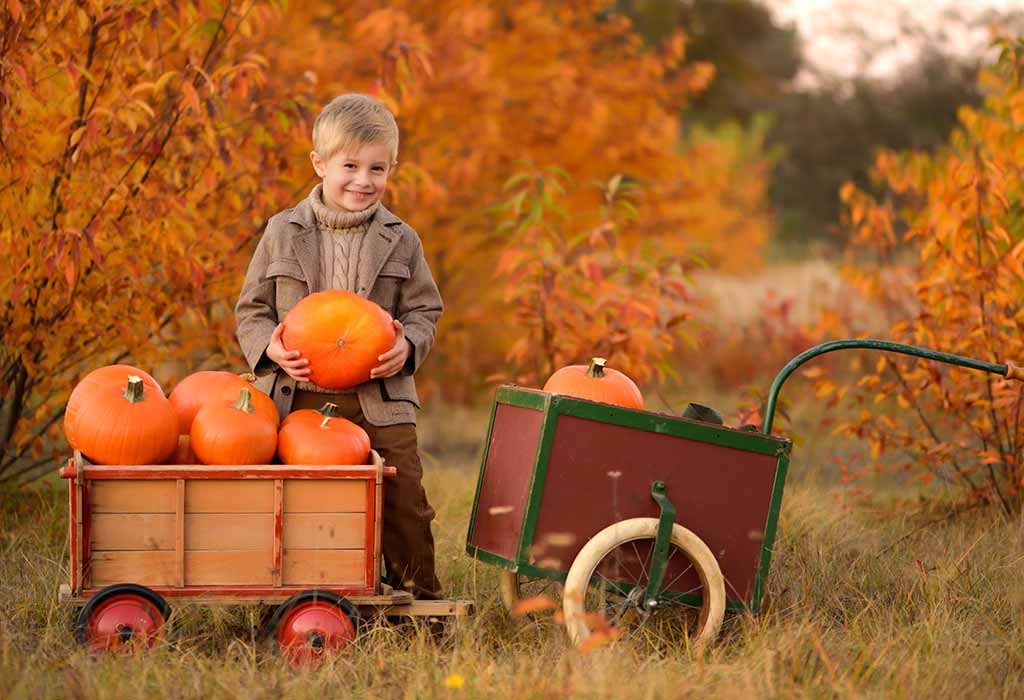 Bending above the spicy woods which blaze,
Arch skies so blue they flash, and hold the sun
Immeasurably far; the waters run
Too slow, so freighted are the river-ways
With gold of elms and birches from the maze
Of forests. Chestnuts, clicking one by one,
Escape from satin burs; her fringes done,
The gentian spreads them out in sunny days,
And, like late revelers at dawn, the chance
Of one sweet, mad, last hour, all things assail,
And conquering, flush and spin; while, to enhance
The spell, by sunset door, wrapped in a veil
Of red and purple mists, the summer, pale,
Steals back alone for one more song and dance.

“In the dreamy silence
Of the afternoon, a
Cloth of gold is woven
Over wood and prairie;
And the jaybird, newly
Fallen from the heaven,
Scatters cordial greetings,
And the air is filled with
Scarlet leaves, that, dropping,
Rise again, as ever,
With a useless sigh for
Rest – and it is Autumn.”

“Golden and red trees
Nod to the soft breeze,
As it whispers, “Winter is near;”
And the brown nuts fall
At the wind’s loud call,
For this is the Fall of the year.

Good-by, sweet flowers!
Through bright Summer hours
You have filled our hearts with cheer
We shall miss you so,
And yet you must go,
For this is the Fall of the year.

Now the days grow cold,
As the year grows old,
And the meadows are brown and sere;
Brave robin redbreast
Has gone from his nest,
For this is the Fall of the year.

I do softly pray
At the close of day,
That the little children, so dear,
May as purely grow
As the fleecy snow
That follows the Fall of the year.” 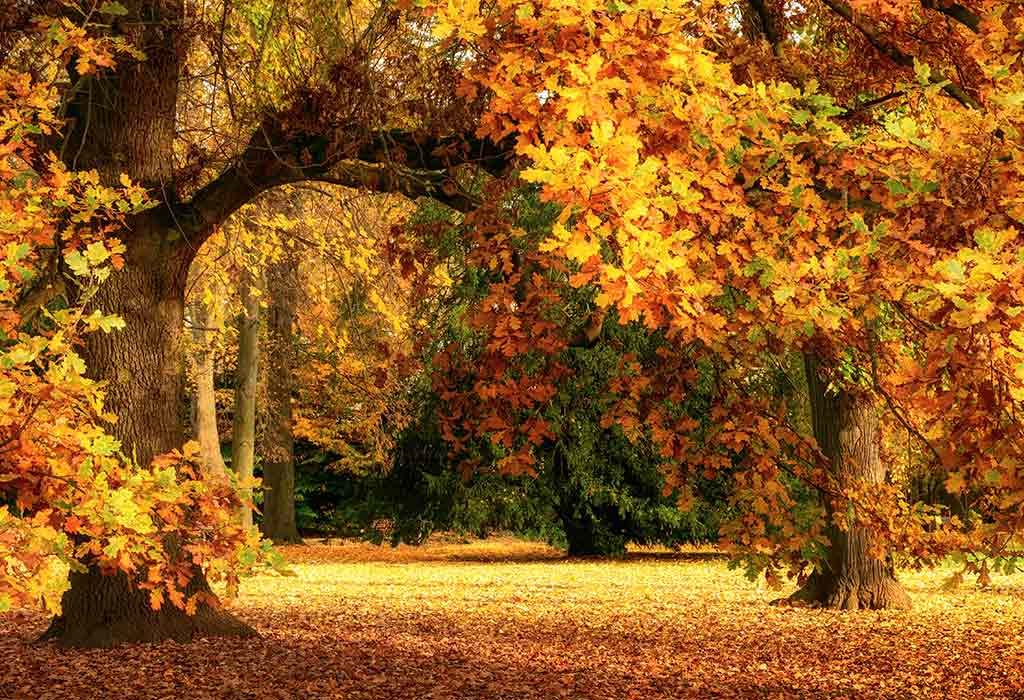 A tree’s leaves in the fall
are some orange, some red
and for a small bird
they make quite a bed

The branches of trees
are some curved; some straight
and some even form
a small figure eight

The trunk of the tree
is the base of itself
quite like in a library,
a rusty old shelf

The roots of the tree
go deep, deep down
like a buried treasure
never to be found

Trees need sunshine,
water, and dirt
without these things
they could get hurt

Trees can do things
that I wish I could
If you’re looking for one
I’d check in the woods!

“When the pumpkins are so yellow
And the vines with grapes abound,
When the melons are so mellow
And the nuts fall to the ground;
When persimmons lose their bitters,
And the apples are so red;
When we love to eat corn fritters
Since the roasting ears have fled;
When vacation days are over
And the children go to school,
They no longer play in clover,
But much learn “Arithmos-rule,”
When weird Hallowe’en’s most naughty elves
With gnomes and sprites appear,
While fat Thanksgiving fills the shelves –
‘Tis AUTUMN, QUEEN OF YEAR.”

A little red apple
Hung high in a tree.
I looked  up at it

And it looked down at me.
“Come down, please,” I  called.
And what do you suppose?
That little red apple

Dropped right on my nose!

It is a willow when summer is over,
a willow by the river
from which no leaf has fallen
nor bitten by the sun
turned orange or crimson.
The leaves cling and grow paler,
swing and grow paler
over the swirling waters of the river
as if loath to let go,
they are so cool, so drunk with
the swirl of the wind and of the river—
oblivious to winter,
the last to let go and fall
into the water and on the ground. 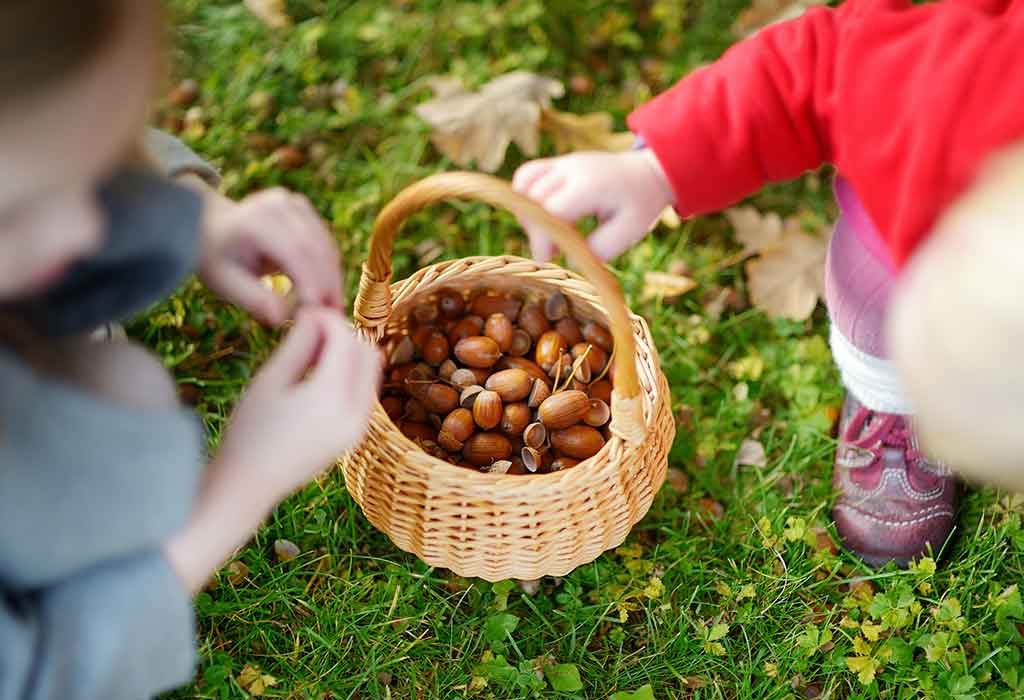 Five little acorns, lying on the ground,
The first one said “oh my
I’m getting round.”
The second one said “I think I’m fat,”
the third one said “I have a nice hat,”

The fourth one said “There’s a squirrel over there.
The fifth one said “well I don’t care.”
Down came the squirrel and
swept them all away, up to his nest for a cold winter day.

11. Farewell to the Farm

“The coach is at the door at last;
The eager children, mounting fast
And kissing hands, in chorus sing:
Good-bye, good-bye, to everything!

To house and garden, field and lawn,
The meadow-gates we swang upon,
To pump and stable, tree and swing,
Good-bye, good-bye, to everything!

And fare you well forevermore,
O ladder at the hayloft door,
O hayloft where the cobwebs cling,
Good-bye, good-bye, to everything!

Crack goes the whip, and off we go;
The trees and houses smaller grow;
Last, round the woody turn we sing:
Good-bye, good-bye, to everything!”

“In the other gardens
And all up in the vale,
From the autumn bonfires
See the smoke trail!

Pleasant summer over,
And all the summer flowers,
The red fire blazes,
The grey smoke towers.

Sing a song of seasons!
Something bright in all!
Flowers in the summer,
Fires in the fall! “

Teach your kids these fall poems and have fun reciting with them while enjoying the autumn season!