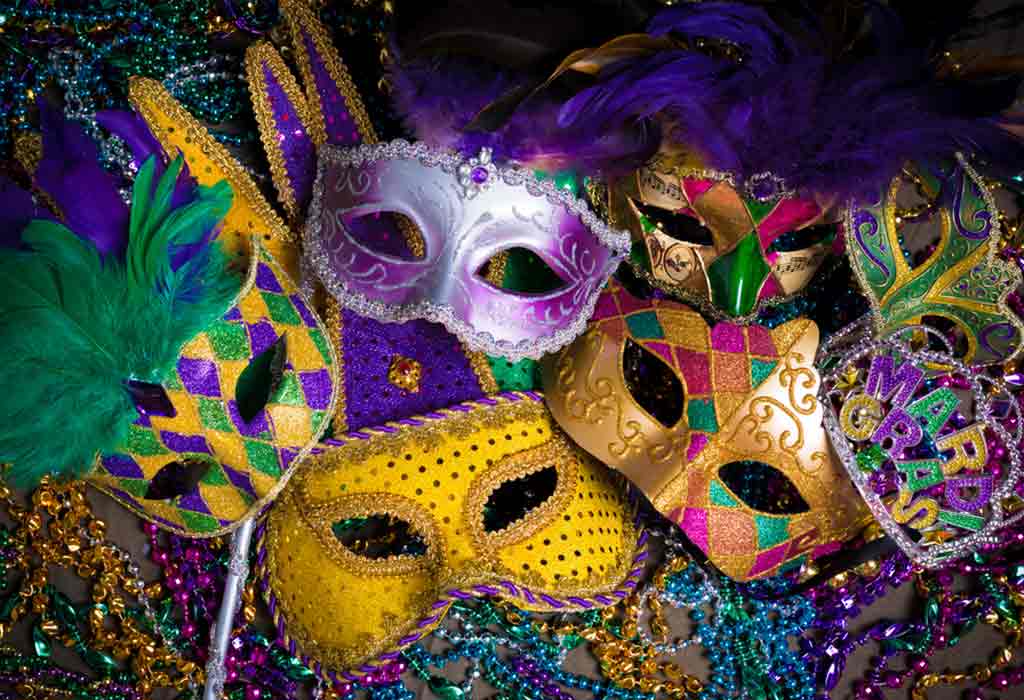 Mardi Gras is a Christian holiday and has its roots dating back to thousands of years as a cultural phenomenon to the pagans to whom it was spring and fertility rites. Celebrated in many countries worldwide with large catholic populations, it is also known as Carnival or Carnaval. This festival which is held one day before the season of Lent, begins; New Orleans hosts some of the most iconic festivities that draws tourists from across the country every year. To learn more about Mardi Gras, continue reading the article!

What Is Mardi Gras?

Mardi Gras is a tradition that has its roots in the Pagan celebrations of Spring and Fertility. It also includes the Roman festivals of Lupercalia and Saturnalia. Going back thousands of years, when Christianity first arrived in Rome, the religious leaders thought it would be good to assimilate these popular local traditions into Christianity rather than abolishing them entirely. It leads to the debauchery and the excess that comes with the Mardi Gras tradition that became a prelude to lent. The tradition spread to the rest of the European Countries from Rome to Germany, France, England, and Spain.

The word Mardi means Tuesday in French, while Gras means ‘Fat.’ Since it comes before Lent, which is a 40 day period of fasting from Ash Wednesday and Easter Sunday, Mardi Gras became the “Fat Tuesday” before Ash Wednesday.

On the days leading up to Lent, traditionally, merrymakers on Mardi Gras would indulge in various fatty foods such as eggs, meat, lard, milk, and cheese that would be stocked up in the homes. This also helped as the several weeks during Lent would be spent on fasting or eating only fish.

The Carnival associated with fat Tuesday refers to the pre-lantern festivities and shares a commonality with a feasting tradition. In Medieval Latin, the word carnelevarium means to remove or take away meat.

When Is Mardi Gras Celebrated?

Since Mardi Gras is literally ‘Fat Tuesday,’ it is celebrated one day before Ash Wednesday and the beginning of Lent. However, in most areas, the tradition has become a week-long festival. Mardi Gras 2022 will be on the 1st of March.

New Orleans, Louisiana, is popular as the go-to city to experience the best of Mardi Gras. Here are 10 of its most well-known cultural ideas behind the festivities:

Fun with the local social clubs.

About It: Krewes are the local social clubs in parts of the city that stake all the annual parades. The faces of the members are often obscured by masks or covered in paint or bandannas during the procession. The tradition goes back to the Krewe of Comus in 1857, which was the first to throw a Mardi Gras parade in New Orleans, which replaced the unofficial Fat Tuesday celebrations prior to it called the scattershot. Over the decades’ hundreds of Krewes have popped up across the city that has their own history, parade themes, and cultural affiliations.

These parades can go for days and weeks! 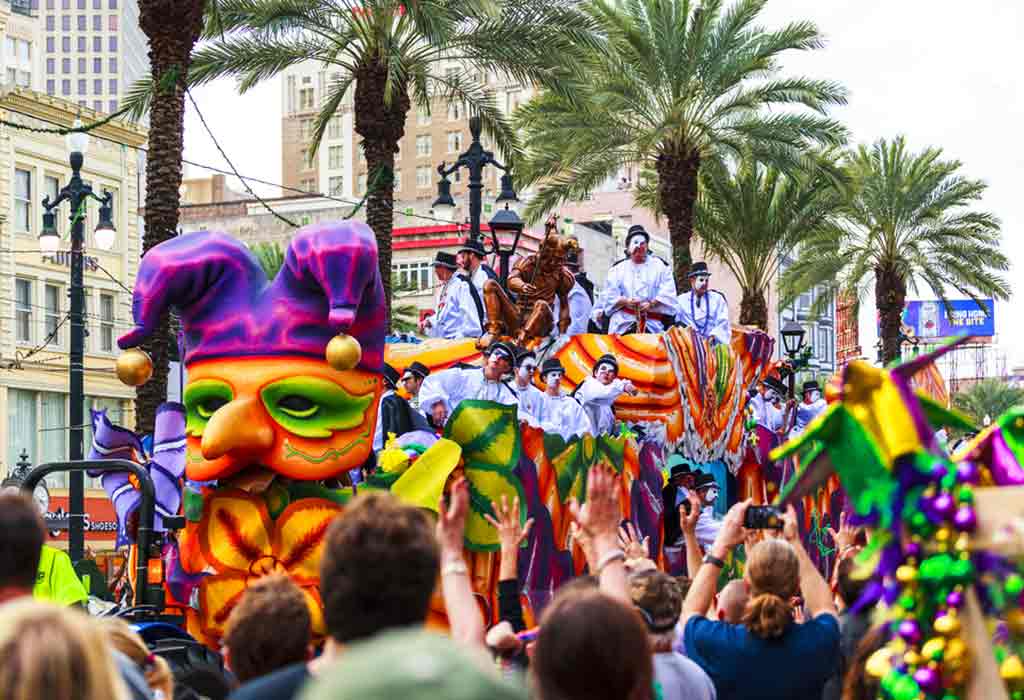 About It: The New Orleans Mardi Gras festival parades are famous and can go on for weeks before Lent. They draw inspiration from their European counterparts, who have maintained a flamboyant celebration in their streets with people donning creative masks and costumes for hundreds of years. The parades in New Orleans, depending on the Krewe, bring forth their unique local cultural flavor to the parade. In 2020 there were thirteen parades on the 15th of Feb alone.

3. Purple, Green, and Gold Are the Traditional Colors

These are the colors you can expect to see repeating across all the parades.

About It: According to legend, in 1872, when Grand Duke Alexis visited, beads of the colors purple, green, and gold were handed to everybody in the party that year as those were the colors of his home. The three colors since became symbolic of the festivities. The Mardi Gras colors also have their own meaning: Purple symbolizes justice, green symbolizes faith, and gold is for power.

4. Masks and Their Meaning

Every mask has a meaning that the wearer expresses.

About It: Masks make up an integral part of the cultural expression in Mardi Gras. They can involve anything from tie-ons that are only eye obscuring to full face masks that resemble a jester. Interestingly the tradition has its roots in the early days of the festival as only the aristocratic male members of the krewe members and highly placed members wore masks to protect their identity amid the debauchery.

This traditional dessert traces its roots to the bible!

About It: The glazed pastries trace back their roots to Medieval times when the Belgian, French, and Spanish cultures celebrated the 12th day of Christmas with desserts and gifts. In the Bible, the Kings visited baby Jesus bringing gifts and desserts of their own. The term “king” cake comes from Biblical stories. The mardi gras king cake is generally circular and resembles a King’s crown. They have a tiny baby figure inside the cake, and whoever finds it will host the next big party.

6. The Beads and Other Throws

About It: The Krewes toss baubles to the crowds as the parade goes by in the streets. Those partying in the French Quarter throw items such as collectible coins, plastic beads, doubloons, and other items in recent years. The tradition is thought to have royal ancestry as kings in carnivals would throw gifts to their subjects.

A bit of history into slavery.

About It: The flambeaux walkers carry the torch as a lesson in the history of Blacks in New Orleans. The name is derived from ‘flambe,’ meaning flame in French. The tradition has been since the first Mardi Gras in 1857. The slaves originally carried the flambeaux in the city. Even today, it is mostly associated with people of color.

8. The “Indians” of Mardi Gras

The tribals are also a part of the celebration.

About It: These are parades involving members from indigenous tribes that feature extremely detailed costumes and headdresses. It also pays homage to the indigenous tribes of the north who sheltered runaway slaves.

9. The King of Carnival

There is only one king: Rex.

About It: The Mardi Gras parades are full of parodies of the royal court. So there will be kings, queens, jesters, and entertainers in every parade. However, there is only one official king of the carnival called Rex. The Rex is selected annually and is given a symbolic key to the city. On his decree, the city shuts down to celebrate.

This modern version of bead throw has a real purpose behind it.

About It: The beads thrown during the parades tend to clog up the city’s sewers. Instead of small pellets that enter the drains, the Krewes adopted painted coconuts as a more coveted souvenir.

Mardi Gras is a blend of ancient traditions derived from the pagans and Christians with a more modern artistic expression. The themes and cultures are just as diverse as the population of the city of New Orleans.