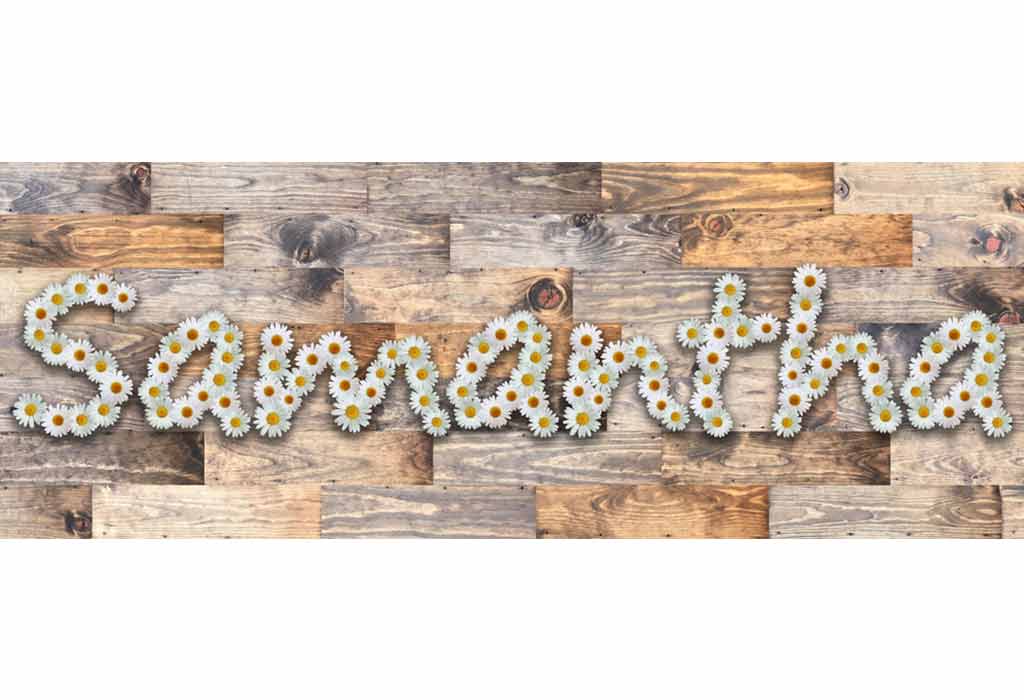 The name Samantha used to be one of the most popular names among our mothers and aunts. The name, derived from Hebrew, shot to fame after 1980 and achieved the most popularity during 1990. The name started gradually declining in popularity from 2000. Despite this, the name has a classic touch and is a wise name choice for your sweet ray of sunshine.

What Does Samantha Mean?

The meaning of Samantha is “told by God” or “name of God.” The name is a combination of two words and is a feminization of the name Samuelis. It is derived from the Greek word “anthos,” meaning “flower.” The name also means “listens well” in Aramaic. Therefore, the name has many beautiful and symbolic meanings, due to which it has been widely popular among Christians.

The origin of the name Samantha comes from Hebrew. The name has been in existence since the 18th century and rose to fame because of celebrity influence. The name became famous from the 1960s sitcom “Bewitched.”

Every name has different variations which come from different parts of the world. Similarly, these Samantha name variations highlight the cultural significance of the name. This list includes some of the other spellings for Samantha along with their origin:

How Popular Is the Name Samantha?

Samantha is one such name that used to be vastly popular in the previous generation. The Samantha popularity index indicates the gradual downfall of the name. Data garnered from the Social Security Administration states that the name used to be among the top 10 names in the US till 2006. It ranked 7 in 2000 and 2001 followed by its gradual decline. The name maintained its steady rank in the top 20 until 2011. Samantha ranked 11 in 2009, 14 in 2009, 15 in 2010, and 17 in 2011.

According to the SSA data, this name crossed the rank 30 thresholds in 2014 by ranking 33. In 2014, the name further decreased in rank and reached 40. The name ranked 54 in 2017, followed by 61 in 2018. In 2019, the name ranked 80, followed by 90 in 2020. This shows that the Samantha baby name ranking has been gradually decreasing in popularity despite its beautiful meaning. Although its rank has fallen, the name is still included in the top 100 baby girl names.

The same Samantha has experienced an increase in the name’s interest from January 2013 till April 2019. The name was number 55 in search interest in the last decade and has experienced significant popularity. The name ranked 73 in June 2021, which implies its probability to further rise in popularity.

Interest in Samantha – US

The interest in the name Samantha in the last ten years has slowly moved towards the downwards slope. However, there was a sudden increase in popularity in the US in June 2018, followed by April 2019, after which the name’s interest has decreased quite a bit.

Popularity of the name Samantha

The top five countries where Samantha’s name is the most searched are Sri Lanka, India, Australia, Kenya, and Bolivia. The search trends indicate the name being widely popular in these countries for the last ten years.

Search trends of Samantha – US

Middle Names That Go With Samantha

Selecting a proper middle name that goes well with your child’s first and last name is essential. This is because it helps maintain the overall harmony of the name, resulting in maintaining its beauty. Therefore, some of the double names with Samantha are:

The influence of celebrities surpasses borders and cultures. Their impact on name trends is integral as well, where the popularity of celebrities increases the name’s ranking. Some of the famous people called Samantha are:

Several baby names have variations that indicate their trend across the word. The names may have similar meanings but are different in spellings. Baby names like Samantha also have a broad set of names that have the same or similar meanings. Therefore, such other names for Samantha, along with family names, are:

Various names have similar-sounding names that provide choices for parents to choose their child’s name from. This list comprises some of the names that rhyme with Samantha:

Maintaining a rhythm among the names of your children can tighten up the bond between them. Therefore, it is essential to choose sibling names with Samantha that match up with this name. Some of the sibling names for Samantha are:

Nicknames are generally used in informal settings. They are used instead of the read name and are given by loved ones. Some of the popular nicknames for Samantha are: