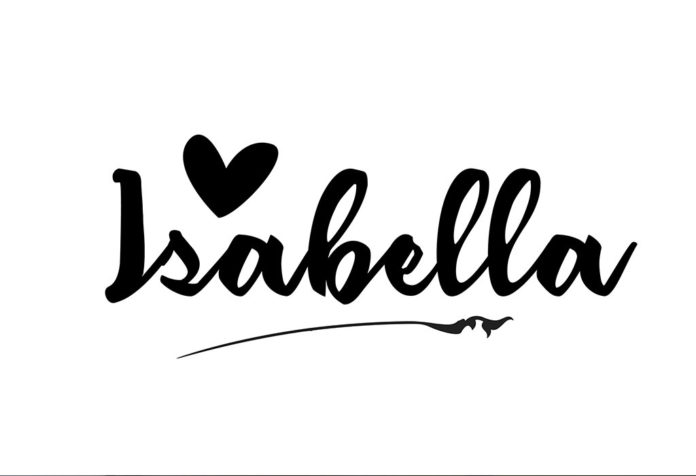 Isabella is an Italian name with many aliases, including Izzy, Iz, Bella, and Belle. Isabella is a variant of the Hebrew name Elisheba that is popular in both Spanish and Italian cultures.

What Does Isabella Mean?

Originally from Italy, Isabella is a feminine name that translates as ‘God Is My Vow.’ It is a Spanish and Italian spelling variation of the female given name Elizabeth. When translated in English, the meaning of Isabella denotes a profound, religious, and biblical relation that entrusts life into God’s hands. Isabella and Elizabeth have been used interchangeably for girls since the 13th Century, continuing to this day.

In Spanish and Italian, this is the translation of the Hebrew word Elisheba, which translates as ‘God is my vow.’ Isabella is a feminine given name that has its origins in ancient Israelite culture. It has roots in Hebrew, Greek, and Latin cultures and mainly originated from Italy before moving on globally as a widely accepted and adopted name.

When written in Hebrew, it is a variant of Isabel, which is itself a variant of Elizabeth, and it translates as ‘dedicated to God.’ Depending on the country, there are other spellings for Isabella that are used instead. The following are just a few of the Isabella name variations documented through different nations and cultures:

How Popular Is the Name Isabella?

Isabella was a reasonably common name during the first half of the twentieth century, but its popularity began to wane in the 1940s. Before 1990, it was a relatively unknown given name in the United States, but it has risen to the top 100 most famous names since then. As per the data collected by the SSA, it can be observed that the name enjoyed the top popularity, with the Isabella baby name ranking being at #1 in 2009 and 2010. However, despite having fallen in rankings since then, Isabella’s popularity is still going strong. The name is consistently within the Top 10 most popular names in the United States from 2011 to 2020, which recorded a rank of #7.

Interest in Isabella – US

The popularity of the name Isabella

Due to the name’s cultural connotations and exotic origins, the term generates the greatest interest in Sweden. This is followed by Denmark, Italy, Austria, and Colombia. It proves that while the name is popular among all cultures, countries with Italian and Spanish cultures are especially interested in the term.

Search trends of Isabella in the US

The name Isabella experienced moderate popularity from 2011 till 2020. As per search trends, the greatest interest for the name within the US was in the regions of Michigan, Massachusetts, California, Rhode Island, and the District of Columbia over the decade.

Middle Names That Go With Isabella

If you like the concept of having a middle name, there are a few things to be kept in mind. This means that there is a need to choose equally beautiful double names with Isabella for a beautiful sounding full name. Here are some of the most adorable middle initials for the young girl that you can come up with:

Isabella’s fame had lately climbed to the top of the rankings due to the use of her given name by several well-known individuals and popular personalities. Some of them include:

Isabella is a well-liked girl’s name with constant popularity. Many ethnic traits, family names for Isabella, and other names for similarity provide you with immense options and alternatives. Here is a list of some baby names like Isabella and suitable family names for inspiration:

Many names rhyme with Isabella, and the possibilities are practically endless when it comes to being creative. Consider the case that you have given your newborn female child an uncommon name, such as Isabella. Then you may want to think about giving them a pseudonym that is both unique and incorporates the religious implications of their given name while staying current with modern culture and trends.

Sibling rivalry is real and often erupts from your children not having a name as beautiful or trendy as their siblings. So, it is crucial to choose sibling names that go with Isabella to ensure harmony and peace within all your children with equally beautiful names. Here are a few suggestions of sister names for Isabella, along with some brother names for you to choose from:

Girl children’s nicknames are an excellent way to refer to them lovingly without having to speak their full name in front of them. It seems that Isabella’s mom and dad may use many different aliases for her given name in social settings to refer to their kid lovingly.

Isabella’s name is associated with a wide range of emotions and connotations among people of various races and civilizations. This association can be traced back to its biblical origins. With the presence of young celebrities who go by the name of Isabella, the very term has gained popularity in this ‘naming’ community. So, if you do choose to name your little bundle of joy, Isabella, there is nothing you can go wrong with!

Struggles of a Single Mother Through Grief and Joy