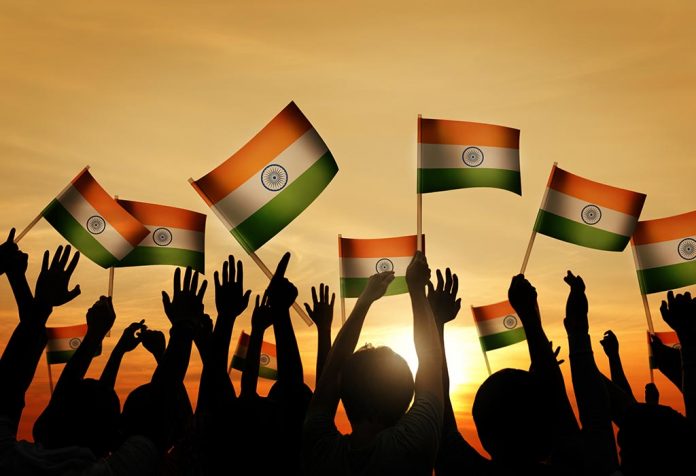 A flag is a symbol of a nation’s identity, it often symbolizes the culture, tradition and spirit of the citizens of the country. The flag is also a symbol of pride; it is what numerous athletes dream to represent, soldiers lay down their lives for and people strive to honour. The flag of a country, in short, represents the country and its people. This article delves into the ideals that are represented by the flag and other such Indian flag information for children.

History of the Indian Flag

The Indian national flag in its current incarnation was only adopted by the nation on 22 Jul 1947, this was when the constituent assembly of the then Dominion of India elected to have the flag in its current form – the tricolour as the national flag, this flag was designed by Mr Pingali Venkayya. On 15 Aug 1947, this flag was then elected by the same body to represent the Republic of India as its national flag. The flag itself was based off the Indian National Congress flag and is known to represent the national identity on numerous levels including communities, religions, ideals and philosophies. This form of the flag was predated by numerous other flags. The first flag known to have represented the nation as a whole was the Sister Nivedita flag which was created in 1906 by an Irish disciple of Swami Vivekananda. It took nine periods of evolution before the current flag became the representation of the nation as a whole.

Evolution of the Indian National Flag

The flag has constantly been evolving from the year 1906, when the first flag that represented a true and free nation of India came to the notice of the local communities, designed by an Irish disciple of Swami Vivekananda known as Nivedita, this flag had the colors red and yellow on it with the symbol of a “Vajra” or holy weapon. This represented the beginning of the freedom struggle, in fact, the red in the flag represents the freedom struggle, the yellow symbolized victory and the Vajra represented holy guidance.

The second evolution of the flag came in 1907, had particular importance to the history of the national flag, this is when the concept of the tricolour was introduced, this flag had three equal bands of three different colours – Green, Yellow and Red. The green strip had numerous stars etched onto it, the bottom red one had a symbol of the sun and a crescent moon.

In 1916, a geophysicist and writer named Pingali Venkayya designed the first flag that intended to bring the nation together, this flag was the beginning of the evolution of the flags to what it is today. Mr Venkayya redesigned the flag numerous times, eventually leading to the tricolour with the Khadi wheel in the centre. A final evolution of the flag came in the year 1947 after Gandhi requested that all communities be represented equally by the flag.

The modern Indian flag as we know it today was first introduced by Nehru in the Constituent Assembly of July 22nd, 1947. It has three bands of saffron, white and green and the old khadi wheel was replaced by the Ashoka Chakra to represent law and dharma. Nehru brought to the assemble the flag in khadi cotton and khadi silk and was unanimously accepted by the assembly.

What Do the Colours and Chakra in The Flag Represent?

Our country’s first Vice-President Sarvepalli Radhakrishnan, who was also a renowned philosopher, gave the meaning of our flag. He broke it down to: What Does Indian Flag Signify?

The flag is always made from Khadi which was used as a way to remind Indians to always remain self-sustaining. An important philosophy of the flag is the representation of different faiths. The saffron colour represents Hinduism, Jainism, and Buddhism. The green represents Islam and the white represents Christianity. However, at the centre is the Chakra which means that above our faiths lie the path of righteousness and tolerance.

On Republic Day of India in 2002, the Flag Code was modified so that common people could hoist the Indian flag on any day of the year. Before this, the flag could be hoisted only on days of national importance. As long as you stick to the principles detailed out by the Flag code, anyone can hoist the country’s flag. Here are some guidelines that you must keep in mind:

Other Interesting Facts about Indian Flag

Here are some more interesting facts about the Indian national flag.

The national flag is a serious symbol within the nation of India, as such, it cannot be manufactured by anyone, any company or agency that manufactures the flag cannot do so solely for the purpose of profit or for any actions that are considered non-patriotic. This is one of the reasons why there is only one authorized Indian flag manufacturer – The Karnataka Khadi Gramodyoga Samyukta Sangh. To manufacture the flag, you must first gain the permission and licenses issued by the BIS also known as the Bureau of Indian Standards. While the flag is a symbol of patriotism, it is also a great unifying symbol for harmony and unity, this is what the nation was founded upon and it is what the citizens of the country stand for, a united and better country for everyone, this is why the Flag is raised at full mast unless someone of great significance passes away or a great tragedy occurs. In the case of the latter scenario, the flag can be flown at half-mast. The flag is hoisted on a regular basis but it has a special significance when hoisted at the election of a new or returning government or president. It also is an emotionally significant moment for the country when it is hoisted on both Independence day and Republic day, these two days represent the struggle against oppression and the victory against those who sought to enslave others.

The Reality of Breastfeeding

Asparagus for Babies – Benefits and Recipes

Dealing with Anxieties and Fears in your Toddler

Chalk it Up! 5 Tips For a Chalkboard Wall