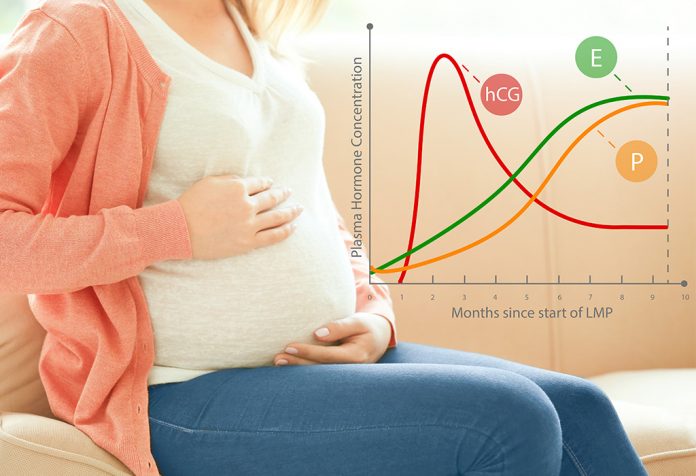 Does this pregnancy feel a bit different, like you are eating for three instead of two? Or is it your first pregnancy and the symptoms feel a bit more intense than your friends and family guided you on? It is natural for expecting mothers to be full of questions. Leave it all down to hCG levels in the body. The higher HCG levels are linked to twin and multiple pregnancies. Since twin or multiple pregnancies are slightly different from singleton pregnancies, you may be filled with more questions than usual. How does a twin pregnancy differ from a single pregnancy? This and the particulars of how hCG plays a role in pregnancy are discussed in the article below.

What Is HCG (Human Chorionic Gonadotropin)?

Human chorionic gonadotropin (hCG) is a hormone produced by fertilised eggs during pregnancy. It regulates the production of other hormones, such as estrogen and progesterone, until the development of the placenta, supports fetal growth, and protects the uterine lining during pregnancy. Known as the pregnancy hormone, hCG is often in women to increase their chances of conceiving.

In short, high hCG levels in the body show symptoms of pregnancy. However, if you are not pregnant and your hCG levels are uncommonly high, it may signs of cancer, ulcer, cirrhosis, or inflammatory bowel disease.

When Is HCG Produced? HCG is produced in the placenta right after implantation. It can be detected in the blood or urine of the woman during the early stages of pregnancy through hCG tests. Since the hormone level may fluctuate before periods, it is best to test after one misses their periods.

Sometimes, high levels of hCG along with the symptoms can also indicate a  molar pregnancy where the placenta grows abnormally when the sperm and egg meet during fertilisation. In this phenomenon, the sperm fertilises with an empty egg, leading to growth in placental parts, but no baby. This is known as a complete molar pregnancy. The other type is a partial molar pregnancy, where the mass of the foetus contains both the embryo and abnormal cells that can carry severe birth defects. The healthy embryo, in this case, will end up being consumed by the abnormal mass.

Elevated levels of hCG can also occur due to a gestational trophoblastic tumour, a rare form of cancer. If treated early, it is highly curable. Another reason for high levels of hCG can be the beginning of an ectopic pregnancy where the embryo grows outside the uterus, i.e., in the fallopian tube. It must be treated immediately since the fallopian tubes are not designed to hold a growing embryo.

HCG is often injected in the system for women struggling with infertility to increase their levels of progesterone and increase their chances of pregnancy.

How Do HCG Pregnancy Tests Work?

There are two ways to test hCG levels:

A single blood test of hCG is not enough particularly for determining twin pregnancy. The first test for hCG is basically used as a baseline. In the following tests, the doctors check for the patterns of change in hCG levels. Every 48 to 72 hours, throughout the first four weeks of a viable pregnancy, hCG levels typically double. The hCG levels should then increase more gradually, doubling around every 96 hours around the 6-week mark.

It is important to pay close attention to the changes in hCG levels at the beginning of the pregnancy because failed pregnancies often have a longer doubling time early on. Failed pregnancies may even start to plummet when they should be doubling.

In a typical pregnancy, the hCG levels peak around 10 to 12 weeks after the last menstrual cycle and slowly decrease throughout the pregnancy, and after the delivery, the hCG levels become undetectable. If hCG levels do not follow this pattern, it may indicate preterm delivery, fetal loss, preeclampsia, and chromosomal abnormalities. If your doctor notices this kind of unusual behaviour in hCG levels, then they may request a blood test every day to check how the levels are changing and get a clear picture of the situation.

What Do Low HCG Levels Indicate?

Do consult your doctor if the hCG levels in your pregnancy are low.

What Do High HCG Levels Indicate?

higher hCG levels during pregnancy may indicate that you are carrying multiples (more than one). In rare cases, it may also indicate:

If you are worried about high hCG levels during pregnancy, you must consult your doctor.

Connection Between HCG and Twins

HCG or Human Chorionic Gonadotropin is a hormone that helps in detecting pregnancy. For a single baby, the hCG level varies from 70 to 750 mIU/ml (i.e., milli international units per millilitre, which is a unit to measure hormones). High hCG levels can be found for twins during the early stages for pregnancy. The normal hCG levels for twins is 30% to 50% higher than in single pregnancy- somewhere around 200 to 1750 mIU/ml.

The level of hCG may double every 2-3 days in early pregnancy. Blood tests give the best results when taken 7-8 days after ovulation. Most home tests can detect pregnancy 4 to 5 days before the next expected period.

The body does not produce hCG; rather, it comes purely from the developing baby. Each developing baby secretes some amount of hCG, which doubles in the case of twins. These hormones work collectively to thicken the lining of the uterus, which supports the baby during pregnancy.

Progesterone is a hormone that stimulates the uterus to prepare for pregnancy. It is produced by the corpus luteum (an endocrine gland within the ovary). The purpose of hCG is to keep progesterone levels in balance until the placenta is developed enough to produce its own progesterone.

When expecting twins, the hCG level increases dramatically, making it faster to detect HCG via blood and urine tests. It doubles every 48 to 72 hours.

The negative result of high hCG levels from the conception twins is that it can lead to more morning sickness during early pregnancy, which means more nausea and vomiting.

Why Is the HCG Level Test Performed?

An HCG level test is performed for multiple reasons:

Does Taking an HCG Level Test Cause Pain?

There are two ways to identify hCG levels in the system – a urine test and a blood test. Except for the pinching sensation of the needle during the blood test, there is no other pain involved. In cases where the individual cannot determine the date of ovulation, it is best to perform either of these tests 10 days after a missed menstrual period.

A urine test or home tests are 97% accurate, provided they are performed correctly. Here, a test sensitive to hCG levels is exposed to the woman’s urine either directly or through a cup containing urine. If the strip changes colour, it means the test result is positive.

Here is how you can prepare to take a home urine test for hCG levels:

HCG levels differ significantly in the case of twin or multiple pregnancies when compared to a single pregnancy. Below is a chart that lists the range of hCG levels in different pregnancies.

How Often Does HCG Multiply? As the embryo keeps growing and developing into a foetus inside the uterus, the amount of HCG released increases rapidly. It doubles approximately after every 2-3 days.

Your first hCG level that comes out in your test is considered the baseline level. This level is important to doctors because they will use this to determine how your pregnancy is coming along, based on the concept of ‘doubling time’ – the process of the hCG levels increasing during early pregnancy.

As the pregnancy develops, the release of HCG slows down significantly. HCG takes 72 – 96 hours to develop if it is valued at 1200 – 6000 mIU/ml. HCG values above 6000 mIU/ml take four or more days to double. Once the HCG level reaches 1000 – 2000 mIU/ml, a transvaginal ultrasound can be done to see the gestational sac. The growth becomes slower once the HCG level goes above 6000 mIU/ml and remains consistent for the rest of the pregnancy. Doctors can carefully monitor the development of pregnancy by way of quantitative blood tests.

A sonogram can be done after hCG levels reach above 6000 mIU/ml as that provides a clearer depiction of pregnancy. It is also common to have ultrasound screenings when there is a doubt over hCG levels. This can help in assessing and ascertaining the foetal age and growth since blood hCG levels are prone to variations. A transvaginal scan is very common as it is more accurate than an abdominal scan.

Note: Caution must be exercised if hCG levels are low as it can be a sign of a miscarriage, a blighted ovum or an ectopic pregnancy. Hence, regular monitoring must be done to diagnose it.

It is possible to have a healthy baby in spite of low levels of hCG. In such scenarios, the results from an ultrasound after 5 – 6 weeks of gestation are more reliable compared to numbers derived from quantitative hCG test results.

What Can Affect HCG Levels?

HCG levels can be affected by the following reasons:

Each baby inside the mother’s womb releases a normal amount of hCG, which increases the overall hCG level in the body. In cases of twins, triplets or more (commonly experienced by older women), the hCG levels can be double or triple compared to the normal level during singleton pregnancy.

Extremely high hCG levels can be caused due to genetic complications during fertilisation. This could indicate that the baby may have Down syndrome. A molar pregnancy can also occur where the placenta overdevelops into an abnormal mass of cells, leading to a mole. This can lead to the death of the baby in the mother’s womb which may or may not get detected.

Low levels of hCG can be experienced due to genetic complications which could lead to ectopic pregnancy or a miscarriage. Pregnancy can be complicated or terminated as a result.

Pregnancy tests performed either too early in the pregnancy or during the latter half of the day you plan on taking the test can produce false negative pregnancy results. You can get the most accurate results by testing the first urine of the day.

Often, hCG is injected to treat infertile women, which again increases the levels of the hormone in the body.

Do High Levels of HCG Mean That You Will Have Twins?

The presence of higher quantities of hCG in urine can be a sign of twins or multiple pregnancies, but this may not always be the case. The level of this hormone may vary from woman to woman or across pregnancies.

What If the HCG Levels Do Not Rise?

If hCG levels do not elevate during the first 8 to 10 weeks of early pregnancy, then it could be a point of concern. Doctors would ask for repeated blood tests to analyse the change in hCG levels. If the patterns show that hCG levels have either fallen or remained stagnant, then it could mean that the pregnancy is not progressing typically.

An ultrasound examination can be paired with the hCG levels to determine the accuracy of the progress of the pregnancy. In case a gestational sac is not visible, the mother must immediately consult her doctor.

HCG levels see a lot of variation in pregnancies and can be an important determinant in recognising a twin pregnancy. However, it is not the sole determinant to indicate that you will be having twins, as an increased hCG level can be the result of several other conditions as well.