Giving Birth To A Baby With Down's Syndrome
Baby with Down syndrome – Types, Causes & Treatment

Home Baby Giving Birth To A Baby With Down’s Syndrome 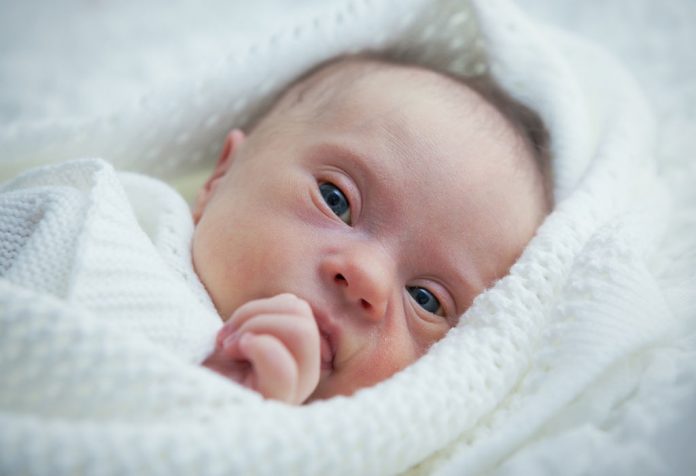 Pregnancy screening tests have now made it possible for a couple to know if their baby is at risk of having Down’s syndrome. While the news that your child may be born with the condition is saddening, it is important to understand the various problems that children with Down’s syndrome experience and how to tackle them effectively.

What is Down’s syndrome? 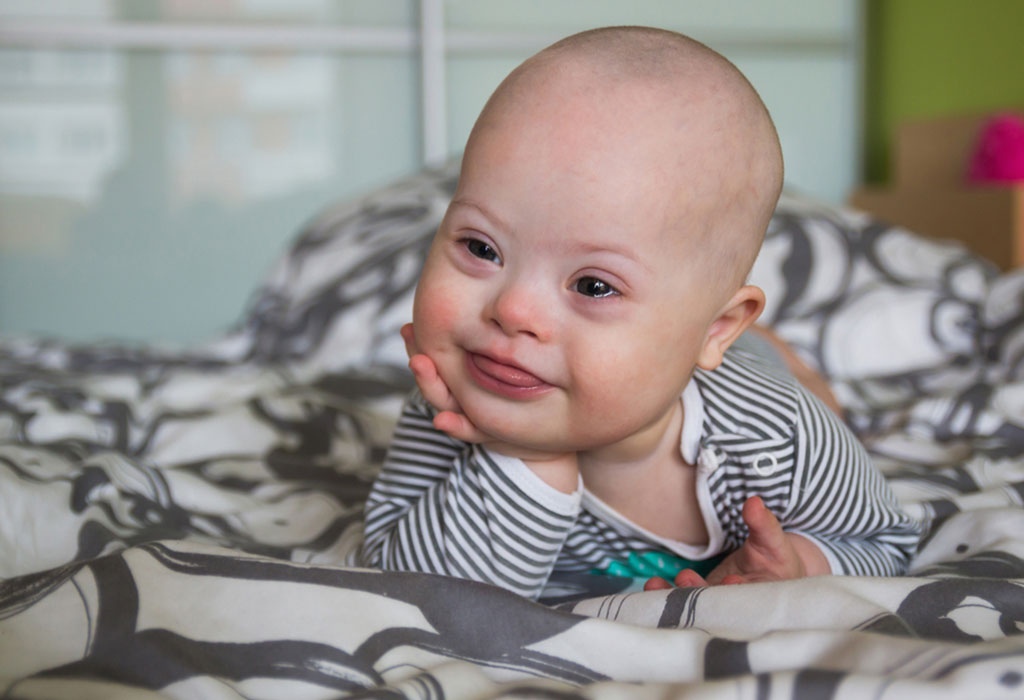 Down’s syndrome is a genetic condition where the child is born with an extra copy of the 21st chromosome. This extra chromosome alters the course of development of the child, mentally and physically. As per DSE (Down’s Syndrome Education International), this condition affects between 1 in 400 to 1 in 1,500 babies born, the frequency varying from country to country.

Trisomy 21 accounts for 95% of the cases of Down’s syndrome. In Trisomy 21, an anomaly in cell division called “non-disjunction” results in 3 copies of chromosome 21 in the embryo.

This happens during or before conception, where the pair of the 21st chromosome fails to separate in either the sperm or the egg. This additional chromosome gets replicated in all the cells of the body.

Translocation can be found among 4% of Down’s syndrome cases. Here, a part of chromosome 21 breaks off and gets attached to another chromosome. The presence of this extra full or partial chromosome 21 causes the disorder.

Certain circumstances can add to the risk of giving birth to a child with Down’s syndrome. Major risk factors include:

Researchers believe that older women are at a higher risk of conceiving a baby with Down’s syndrome. This is because the eggs of older women have a greater risk of undergoing improper cell division.

The chart, as per National Down’s Syndrome Society (NDSS), can be described as follows:

Down’s syndrome can be passed on to babies by both the mother and father if either of them are carriers of the genetic translocation. A carrier of a disease or medical condition does not suffer from the disease or medical condition, but carries a ‘faulty’ copy of the gene responsible for causing it. When such a person becomes a parent, chances are that the child may suffer from the disease, or become a carrier, just like the parent.

3. Having a child with Down’s Syndrome

About half the infants born with Down’s syndrome have some kind of congenital heart defect. Some of these defects can even be identified during prenatal ultrasounds. The baby may undergo regular echocardiograms for the initial three months if a heart defect is detected.

The baby with gastrointestinal defects may face abnormalities in:

Babies with Down’s syndrome are at a higher risk of developing autoimmune disorders that may lead to an abnormality in the immune system. This means that they have a higher chance of contracting contagious diseases than normal children their age.

A majority of the infants with Down’s syndrome face some kind of eye problem, which ranges from mild (blockage in tear ducts) to serious (cataract) problems. It is recommended that the child be taken to see a pediatric ophthalmologist once every one or two years.

Infants with Down’s syndrome may be prone to ear infections as they may have comparatively narrow ear canals.

Children with Down’s syndrome do not have well developed soft tissues and skeletons. This can obstruct their airways, making it harder for them to breathe. As they cannot take in enough oxygen, sleep gets affected and can result in discomforts such as sleep apnea. Sleep apnea is a disorder where affected individuals find it hard to breathe during sleep, resulting in shallow breaths or intermittent pauses between breaths.

Children with Down’s syndrome are at a greater risk of obesity as compared to normal children.

The child may have a misalignment of the top 2 vertebrae in the neck, which puts a risk of serious injury to the spinal cord by overextension of the neck.

The child is at an increased risk of developing Dementia and Alzheimer’s disease as he/she advances in age.

About 10% of babies with Down’s syndrome have a malfunctioning thyroid gland.

The health problems mentioned above may sound severe, but these can be treated with proper attention and care. You should remember that the life expectancy of people with Down’s syndrome has increased tremendously to over 60 years as compared to earlier times.

Growing Up With Down’s syndrome 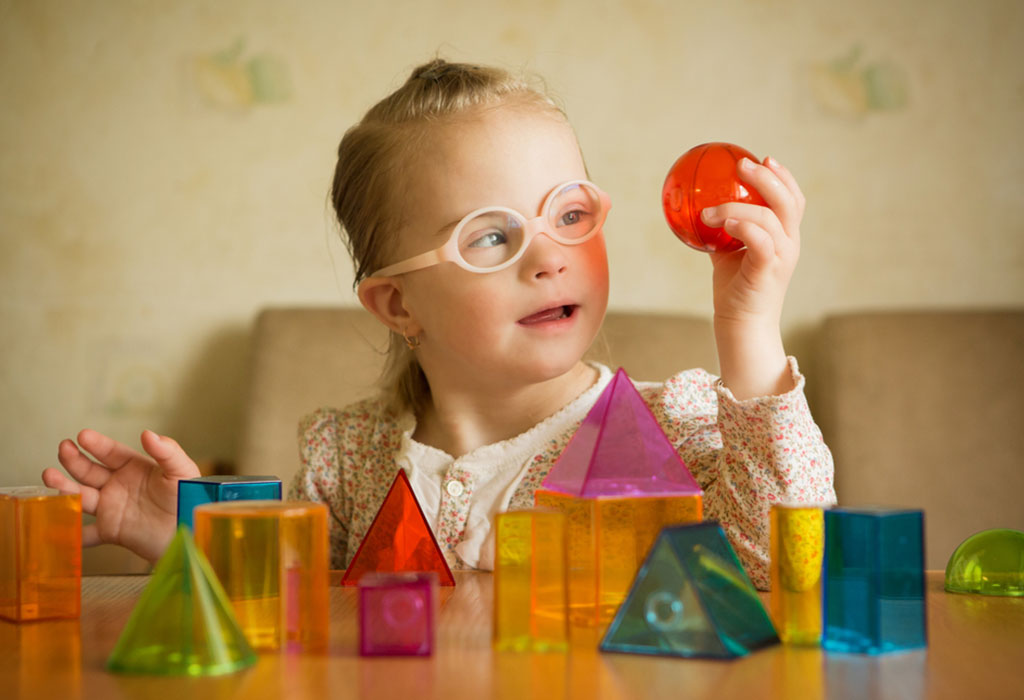 The life of a child growing up with Down’s syndrome can be filled with interesting opportunities for playing, interacting and moving in their initial years of life. With age, they excel in all areas and develop the confidence to interact with people.

Children with Down’s syndrome have individual interests, strengths, talents and needs, just like other ordinary people. Each child develops at a different rate and in a different way by being supported and socially included in their schools, families and communities.

Their personalities can be unique. They may be calm or anxious, sociable or shy, and easy to manage or difficult to manage. They may score from mild to moderate in intellectual areas, but you may often be overwhelmed by the child’s insight, creativity and cleverness.

With understanding and support from communities, young adults with Down’s syndrome also excel in areas not expected of them. They hold meaningful jobs, manage their own households well and equally contribute to their communities they live in. Quite often, they face challenges, which they overcome in ways that can inspire others.

There are no specific symptoms to indicate that you are carrying a child with Down’s syndrome. It may be estimated by certain screenings during the early stages of pregnancy. These include:

Screening tests are aimed at providing an estimate of the likelihood of the foetus having Down’s syndrome. These are cost-effective as well as easy to perform, and help the parents in deciding whether to conduct diagnostic tests.

This screening combines the results obtained from the first-trimester screening tests (with or without NTT) and blood tests from the second-trimester quadruple test, thus providing parents with the most accurate results.

Children born with Down’s syndrome tend to have symptoms that can be seen in their early stages only.

Early signs of Down’s syndrome in infants can be identified by the features listed below:

Babies having Down’s syndrome can display a full range of emotions. They can be creative, imaginative and exhibit certain physical attributes as follows:

The treatment generally depends on the child’s physical ailments and the intellectual challenges faced at different stages of life.

Most of the children require speech and physical therapies to enhance their development as they grow. Later on, they may need occupational therapy, which would help them learn job skills and live on their own.

How to prevent Down’s syndrome?

Studies indicate that there may be a link between Down’s syndrome and neural tube defects. Folic acid supplements help prevent the occurrence of neural tube defects in babies as well as reduce the risk of developing Down synyndrome.

Women above 35 have an increased risk of giving birth to babies with Down’s syndrome.

It’s recommended that couples who are at high risk of conceiving a child with Down’s syndrome go through a pre-implantation genetic screening.

Diagnostic tests are accurate in detecting whether the foetus has Down’s syndrome condition. These are invasive tests performed inside the uterus and carry a high risk of miscarriage, preterm labour and fetal injury. Hence, these tests are mostly recommended to women aged 35 and older or to those having abnormal results from screening tests.

Down’s syndrome is diagnosed even after birth by certain physical characteristics. A blood or tissue sample is stained to check the chromosomes grouped by number, shape and size.

Caring for a Child with Down’s syndrome

Raising a child with Down’s syndrome is challenging as well as rewarding. Your path may be different from other parents, but the journey will give you countless memories and fill your life with unconditional love.

Babies with Down’s syndrome require extra care. It is important to regularly monitor their growth.

Babies with Down’s syndrome may take time in learning how to suck, chew and swallow. Weaning may hence be delayed.

Babies with Down’s syndrome suffer from dry skin. You may gently massage with oil or moisturising cream every day.

Babies with Down’s syndrome face problems in regulating their body temperature and may get too cold or overheated quickly. It is recommended to dress them appropriately.

If the baby is breathing is too fast, it is important that this is monitored and acted upon immediately.

Thyroid hormone levels may be too low in babies with Down’s syndrome, which can in turn lead to a number of other problems/complications. It is advisable to regularly have blood tests for thyroid done every 6 months or 1 year.

Any discomfort leading to spitting up, swelling of the stomach or abnormal stool pattern are warning signs that need to be looked into.

As per National Down’s Syndrome Society (NDSS), the results listed below describe the average growth of Down’s syndrome children from 0 to 3 years:

While a child with Down’s syndrome may need extra care and attention, he or she is by no means less cherished than a normal child. Addressing the baby’s needs without resentment, or without any feeling of helplessness or pity for yourself or the child, will ensure the development of a healthy individual.

How to Bond With Your Adopted Child

Priyadarshika Ingle - August 10, 2020
With a little baby in the house, its not a surprise that couples tend to lose sight of each other. True, your baby requires...