Home Baby Formula Milk for Babies: How Much Does Your Baby Need? 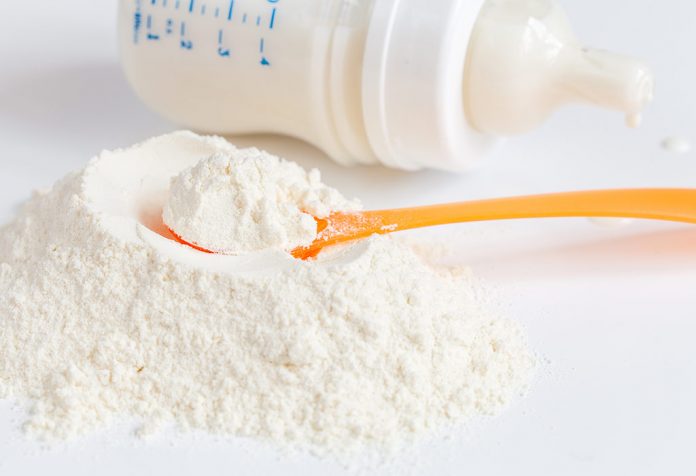 Choosing whether to breastfeed or formula-feed is a major decision for any new parent. Unlike breastfeeding, when you opt for formula milk it can be confusing to try to work out just how much to give the baby every day. The answer lies in the baby’s age, weight and whether you’re feeding only formula or giving it as a supplement alongside breast milk or solids. Here are a few things to know before making up your mind on how much formula to give a baby.

Babies need to feed often, possibly every 2-3 hours. Every baby is different, so it’s important to learn to spot when the baby is hungry before it gets too upset and cries. The cues start with opening and closing the mouth, licking lips, and sucking on hands, fingers or clothing. It is common for them to root for up to 4 months of age. That’s when they turn their head and open their mouth towards your chest. Babies also make sucking motions and bring their hands to their mouths; this is a good time to feed them. Older babies also move their heads frantically from side to side while crying when hungry.

However, it can be hard to spot feeding cues sometimes. They may naturally root when you offer them the bottle even though they are not hungry but instead just want to be held by you.

How Much Formula Milk Does Your Child Need?

It can be tricky to work out how much formula milk your baby needs as each baby has a different appetite, and its nutritional needs change every month. Generally, babies eat when they are hungry and stop when they feel full. Formula-fed babies tend to eat more and be heavier than breastfed ones. The general rule of thumb on formula milk measurements for babies is that it is measured as per their body weight. Babies require between 150 ml and 200 ml of formula per kg of body weight each day. That is, if a baby weighs 3 kg, it will need between 450 ml and 600ml of formula per day. However, they may not want to drink that much in their first week or not take the same amount at each feeding, so keep in mind not to force them to feed. If you wonder how much formula milk a newborn should drink, try giving them about 60-70ml of formula at each feed, as they won’t be able to take more than this in one go.

Amount of Formula As Per Baby’s Requirement

A baby’s formula milk consumption depends not only on weight but also on age. As they grow older, their nutritional and calorie needs go higher, and they eat more. During the first few weeks, they might drink an average of around 70 ml of formula in one feed. Between the first two weeks and two months, they would consume around 75-105 ml in each feed, which would add up to a total ranging between 450 ml and 735 ml in 1 day. When they are about 2-6 months old, they would consume between 105 ml and 210 ml of infant milk formula in a feed.

The formula milk for a 6-month baby totals around 900 ml a day, and they would want between 210 ml and 240 ml at each feed. Also, by this time, most babies would be introduced to solid foods, and their formula intake would gradually drop down to around 600 ml a day.

How Often Should You Feed Your Baby?

It is recommended that babies need be fed on demand, which is whenever they show signs of hunger. Formula-fed newborns feed every 2-3 hours. As they get older, the capacities of their stomachs increase; they eat more in one feed, and need to be fed every 3-4 hours. As mentioned earlier, you need to look for feeding cues by the baby and feed accordingly. You need not wait until the baby gets cranky and starts crying till you feed them. Crying is often a late sign of hunger. It is also equally important to look for signs that the baby has had enough to slow down and pause.

Also, if the baby is young or having problems with gaining weight, they should be fed often, even if it means waking them up from sleep. In such cases, it is advisable to consult a doctor on how much and how often they should be fed.

How Do You Know if Your Baby Is Having Enough Formula?

The baby’s physical appearance and behaviour can give you an insight into whether or not they’re getting enough formula.

The following signs indicate that they are getting inadequate formula (underfed): The following signs indicate that the baby is receiving too much formula (overfed):

The signs of a baby receiving just the right amount of formula:

However, there are conditions that deviate from the above-mentioned norms. Babies can go through growth spurts at 2-6 weeks, four months, and six months. A growth spurt is a period of rapid growth and can happen at any time. During one such spurt, they tend to eat more and are hungrier than usual.

Also, formula-fed babies tend to drink more. Breastfeeding gives the baby moderate control over the milk intake, unlike in a bottle where the milk flows readily. Since there’s more milk in the bottle and the babies have a natural suckling reflex, they tend to consume more and are at risk of overfeeding. Formula milk and breast milk are metabolised differently, and the formula falls short in nutritional content compared to breast milk. Hence they may require more.

The ideal time to start replacing formula milk is about six months when you begin to introduce them to solid foods. But since there aren’t many solid foods they would like to eat, they won’t get all the nutrition needed, so it’s important to keep them on the formula until they are about a year old. You’ll begin to notice a drop in their formula intake from 900 ml a day to about 600 ml as you begin to feed them more solids. After a year, babies only need about 350 ml of milk a day, either formula, breastmilk, or high fat cow milk. If they have been raised mostly on formula, and are fully established on solids, start decreasing the formula incrementally.

Formula feeding for babies is a healthy alternative to breastfeeding. It provides almost all beneficial nutrients for the baby to grow. Hence, it’s important to know how much formula milk is adequate for your baby so that the baby doesn’t miss out on important nutrition.

How to Breastfeed Your Baby while Travelling

10 Must-Do Exercises for Children & Their Benefits

Itchy Breast During Breastfeeding – Causes and Remedies to Comfort