Watching your child twist and turn in distress due to vomiting too much and getting dehydrated is no experience any parent wants to sit and watch. Read on to know what can cause vomiting in babies and how to prevent it.

Is Vomiting in Babies Normal?

Vomiting in infants is not always normal but spitting is. The oesophagus and stomach muscles are underdeveloped which is why they spit out or gurgle food as a reflex. This is normal and sometimes you may find milk coming out of his mouth too. When a baby vomits, he experiences severe discomfort as a lot of food is pushed up from his stomach. Vomiting accompanies mucus, other liquids and comes with symptoms like fever, dehydration, and fussiness. 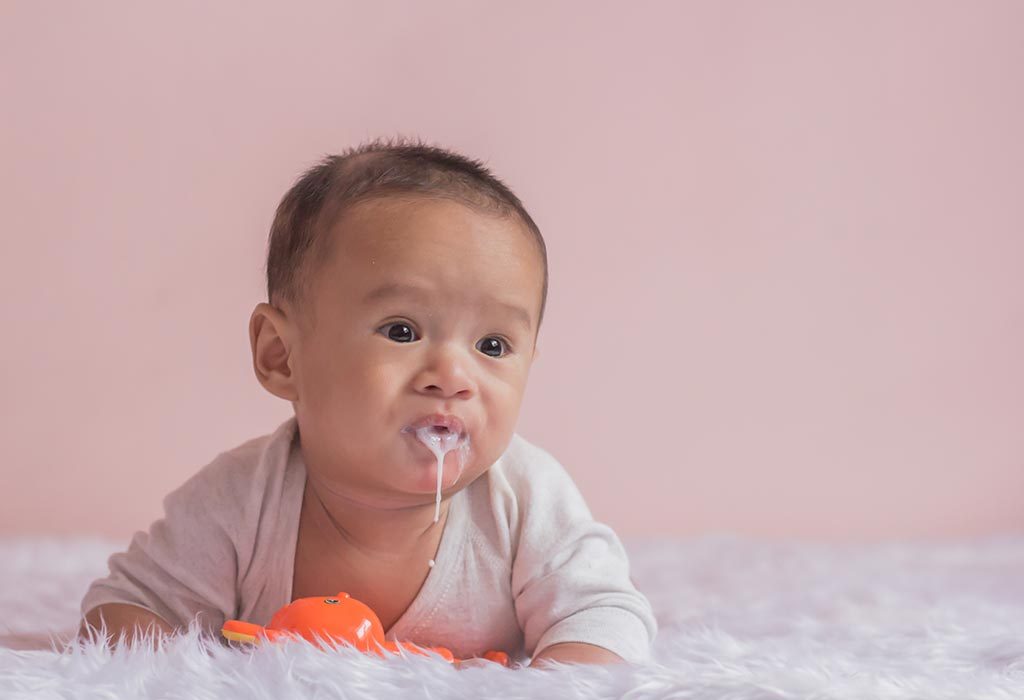 Why Do Babies Vomit?

Babies vomit mostly due to bacterial illnesses but at other times, there may be other causes of vomiting in newborn babies which are as follows:

1. Gag Reflex due to Overfeeding

When you feed your baby too much, they feel discomfort after eating and a gag reflex gets triggered, thus causing vomiting. Baby vomiting after feeding is very common these days.

These cause the mucus stemming from the cold to travel down the back of their throat and unsettle the stomach lining. This triggers the gag reflex due to the body wanting to flush out the mucus. Other possible bacterial infections which trigger vomiting in babies include stomach flu, gastroenteritis, meningitis, urinary tract infections, and pneumonia.

Crying too much is known to make a baby throw up. There’s no need to be alarmed. A 1-year-old baby throwing up while crying is considered normal. 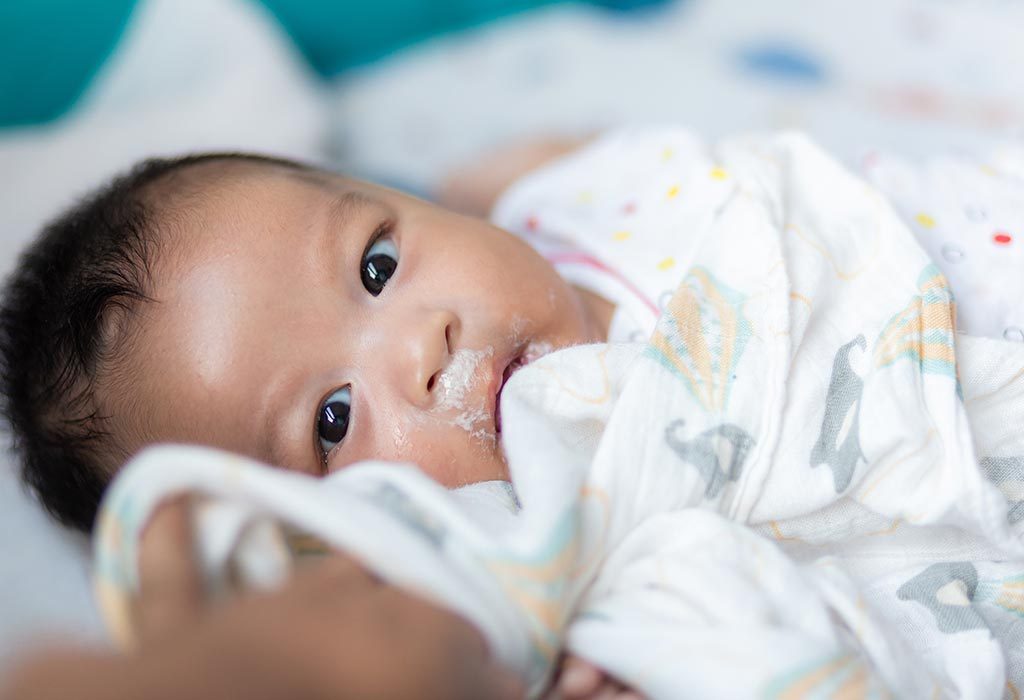 If your baby has ingested anything that’s toxic into his digestive system, like certain drugs, supplements, or foods that don’t suit him, he’ll vomit.

6. Obstruction In the Intestines

Vomiting may also be a sign of obstruction in the intestines.

This is a rare condition where the muscles that connect the intestine and stomach thicken quickly and push the contents out. It could lead to malnutrition, severe dehydration, and various medical complications which is why immediate medical treatment is required. Forceful vomiting is the biggest sign of pyloric stenosis and happens within 30 minutes from the time of feeding. Surgery is the only treatment for this medical condition as the food is unable to pass from the stomach exit into the intestines.

When Should I Worry?

If your baby shows any of the following signs during and after vomiting, take him to the GP or paediatrician:

Is It Worrisome If There Is Bile Or Blood In Your Baby’s Vomit?

No, it’s not. In fact, it’s pretty normal. This is because when your baby is in the womb or when you have a caesarean birth, his mouth sucks in some of the blood along with the mucus from amniotic fluids. The other reason why you may see blood in your baby’s vomit is if you’ve been positioning him incorrectly while breastfeeding and you have split or broken skin around the nipples.

Is It Normal for a Baby to Vomit after Feeding?

Yes, baby vomiting after breastfeeding and eating is normal. Vomiting in babies after feeding is a natural reflex as it indicates that your baby’s stomach is full and doesn’t have room for more. Sometimes he may spurt and bring up curdled milk if it’s partially digested or just burp instead after swallowing the air. As long as your baby continues to gain weight normally, there’s nothing you have to worry about.

Is Your Baby Vomiting or Just Spitting Up?

There are a few ways to tell if your child experiences baby vomiting frequently or spits up after feeding. First, if he’s spitting up you’ll notice that the contents from his stomach come out effortlessly. The stomach and oesophagus muscles are still developing which is why it triggers a gag reflex. Your baby also won’t get anxious and stay relaxed when this happens. Air might also get swallowed by your baby and you’ll notice him releasing burps.

How to Help Your Vomiting Baby

Here are a few ways to help your vomiting baby:

Can You Prevent Your Baby from Vomiting?

Although you can’t totally prevent your baby from vomiting as it’s the body’s natural response, however, there are a couple of things you can do to ease his discomfort. Here are some tips on how to stop baby vomiting after a feed: 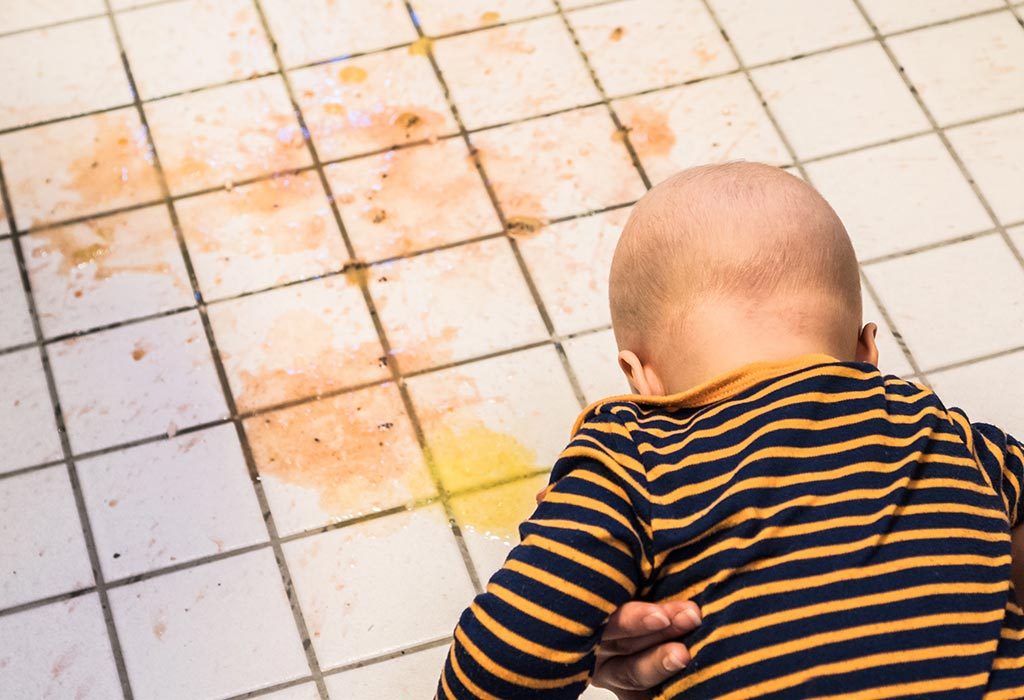 Seating your baby upright or on the side when he’s not sleeping is a good way to ease the discomfort. Use a soft and gentle voice to soothe him or sing his favourite tunes to help him relax. He should be sitting upright and stay in this position for at least 30 minutes after the feeding session is complete.

If it’s a case of excessive vomiting, your paediatrician may advise you not to give your child any solid food for the next 24 hours. Sometimes this may be longer than that which is why you have to talk to the doctor to make sure.

Water not only cleanses his system, detoxifies the body, and flushes out mucus, but it prevents dehydration and reduces the bouts of vomiting. Baby vomiting clear liquid could happen initially due to your baby drinking a lot of water.

To meet your child’s nutritional requirements without making compromises, just reduce the portion sizes used in feeding sessions. Feed in smaller sizes and frequently but make sure to avoid overfeeding by giving too much.

Carry your baby gently, let him lean on you and allow him to burp. Let him burp as much as he wants and help him by lightly patting his back. This will ease discomfort and get the gas out of his stomach.

Even if your baby is vomiting, don’t stop breastfeeding him. Instead, give him smaller doses of breastfed milk every two hours in 5 to 10-minute increments. You can use a teaspoon for reducing the doses, a cup, a bottle, or even give your little one the regular baby formula (if he has already been taking the special formula for a while now).

If your baby has been having diarrhoea for several weeks after vomiting, you can give him a natural baby vomiting remedy known as the BRAT Diet. Do this only when the doctor says that your child has permanent lactose intolerance. The BRAT Diet primarily consists of bananas, apple sauce, toast, rice, and lactose-free milk like soymilk. The reason we recommend soymilk instead of dairy-based milk is because his digestive system is underdeveloped and won’t have sufficient lactase enzyme to digest dairy-based milk.

If your baby is vomiting and experiencing diarrhoea, then you should do your best to keep him hydrated. If the vomit is “ground-coffee” in colour or if you notice no diarrhoea, then there is cause for concern. Also, vomiting usually doesn’t last for longer than a 24-hour period and if it does, you’ve got something more than a stomach bug going on deep inside. It could indicate any bacterial or serious infections/illnesses and if your baby keeps coughing up blood after vomiting with every passing minute, take your child to the paediatrician or hospital immediately.

1. Can I Feed My Baby after Vomiting?

Yes, you should. You may want to stop feeding your baby after vomiting but if you don’t, your little one may get malnourished and dehydrated.

2. How Can I Prevent Dehydration in My Vomiting Child?

If your baby is vomiting every five to ten minutes, don’t give him any water. Let his stomach settle and see if it’s calm without any vomiting for 30 minutes. When that happens, you can give your child an over-the-counter oral electrolyte solution to replace the lost minerals, nutrients, and vitamins lost from all those bouts of vomiting. Feed him one teaspoon of this every 5 or 10 minutes and when he’s feeling comfortable, increase it to two teaspoons. Do not give your baby chicken broth and carbonated beverages as these do not provide him with the nutrition he requires. In addition, do not give any fruit juices to kids younger than 1 year because these don’t facilitate rehydration according to the American Academy of Paediatrics (AAP).

If your baby continues to vomit due to motion sickness, you can stop the trip a few times or pause in between to let him catch his breath. Make sure your child doesn’t choke on his vomit by letting him burp often and by feeding him smaller and more manageable portions. Every child is different when it comes to the frequency and bouts of vomiting but use the cues, tips above, and you’ll be good to go.

All in a Day’s Game: 5 Fun Ways to Teach Money Management

How to Clean a Laptop Screen Safely – Step By Step Guide

As ‘Zindagi Unlocks’, Kids May Be at a Higher Risk of...