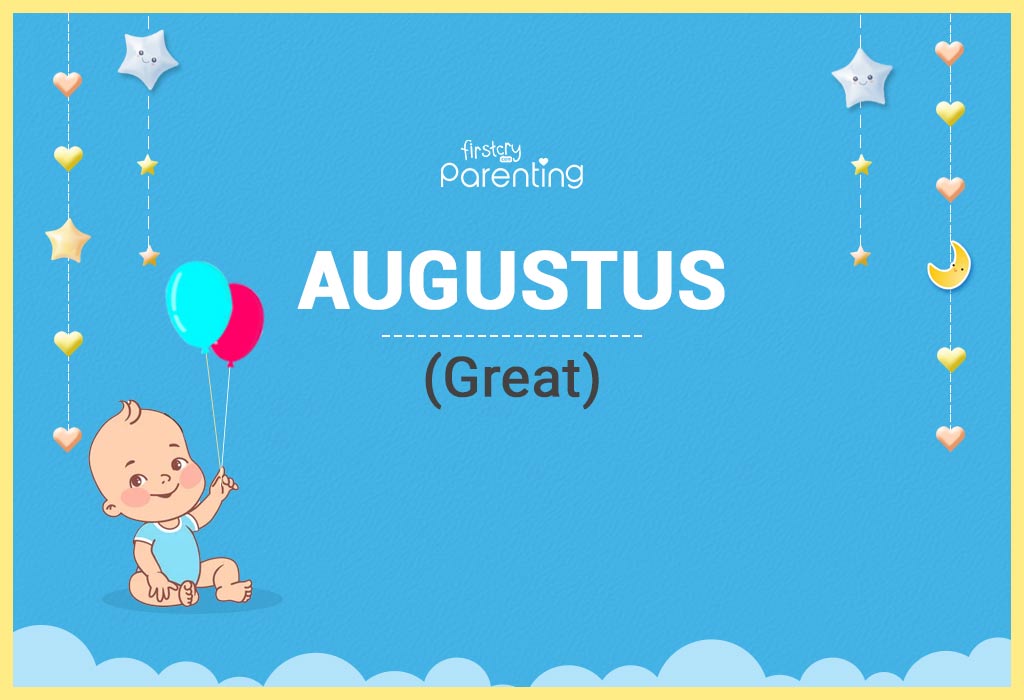 In this Article
Baby-names that hold some gravity and weight have been proven to become timeless and relevant year upon year. And among these names, Augustus has been a permanent entry since ages ago. So, what is so special about this name? Let’s find out, but exploring its meaning, origins, popularity, and celebrities who have contributed to making the name ever so popular.

What Does Augustus Mean?

Augustus’s most admirable meaning can be translated as being “great” or “magnificent.” A preferred one among parents who wish for their son’s name to make an impactful statement, the name also has a Biblical background. As per its Biblical mention, the meaning of Augustus can be translated to “increased” or “augmented.” With multiple cultural origins, the name can be stated to be a prominent one across multiple cultures and regions.

The name primarily comes from a Latin origin. Apart from the name’s appearance in the Bible, it was also the name adopted by the adopted son of Julius Caesar, Octavian Caesar. Apart from this Latin origin, the name can also be stated to have Slavic, German, and American origins, with the meaning remaining consistent across each origin.

Multiple spellings and variations for a name like Augustus can mean many other ways of spelling this familiar name. In this regard, some other spellings for Augustus, or Augustus name variations, in other words, have been listed below for your reference and information:

How Popular Is the Name Augustus?

The popularity of a name in a particular year is often determined by evaluating how many babies were registered with the name in that year. And for this, assessing data from the Social Services Administration is the best metric. To evaluate the Augustus popularity ranking, the data from 2000 is sufficient. As per this data, it can be seen that the name has been growing in popularity steadily. While it started 2000 with the ranking of being the 958th most popular boys name, the best Augustus baby name ranking was achieved in 2017, with the ranking of 422. While it has fallen a bit since then, with 2020 recording the ranking of 502, it can be presumed that the name is on its way to becoming even more popular in the recent future. This is especially since the similar name Augustine recorded the ranking of 711 in 2020.

Interest in the name over the last decade can have been consistently fluctuating, showing a clear pattern. This pattern is in the form of dismally low interest followed by a sudden and exponential rise every year in August. Within this consistent pattern, August 2014 recorded the score of 100, probably with the combined search trends of the regular interest in the month of August and the character from “The Fault in Our Stars.” This is countered by the lowest score of 11 in February 2021 and November and December 2021.

Interest in Augustus – the US

Augustus has been somewhat of an unpopular term in the US during the last decade. While there was a transient increase in interest in June 2014, leading to a score of 100, presumably due to the release of the coming-of-age movie “The Fault In Our Stars,” interest during the rest of the timeline has stayed consistently stagnant. Apart from this momentary increase in interest, the second-highest score was 46 in October 2014, while the least popularity score was recorded in July 2021 at just 16.

Popularity of the Name Augustus

Among the 42 global regions evaluated, the name was observed to have been the most popular in the Netherlands, presumably since it was a location mentioned and shown in “The Fault In Our Stars.” Apart from this, Belgium, New Zealand, Australia, and the United Kingdom showed the highest popularity. However, as opposed to the score of 100 achieved by the Netherlands, the following four countries obtained scores of 58, 6, 6, and 6, respectively.

Search Trends of Augustus – the US

In the case of sub-regions in the US, out of the 51 sub-regions, Alaska has generated the highest interest in the name. This is followed by Massachusetts, Virginia, New Jersey, and New York, completing the top 5 US sub-regions.

Middle Names That Go With Augustus

Middle names have become a crucial part of the naming process of the child, and parents often look for middle names that are equal to the first name in terms of grandness, beauty, and meaning. So, if you are looking for suitable double names with Augustus, the following list can be helpful:

Famous people called Augustus, along with famous fictional characters with the name, have played an immense role over the years in making the name even more popular. So, here are some of these popular mentions, including both celebrities and fictional characters:

While some may prefer names that have a beautiful meaning, others may want to go for names that sound grand and attractive. So, here are some charming names that rhyme with Augustus and are equally as grand:

While these are informal names, choosing the correct nickname is as important as choosing the first name for your child. Depending on your mood, you may choose to call them by fun nicknames, nicknames dripping with your affection for them or even names that best portray your wacky relationship. So, here are some such varied nickname options for you to keep in mind:

The name Augustus has incredible potential, fuelled by the commendable meaning, grand sound, and the number of renowned figures bearing the name through history. Thus, choosing the name for your son is a worthy choice, suitable for a boy who wishes to be as great and magnificent as the name means.