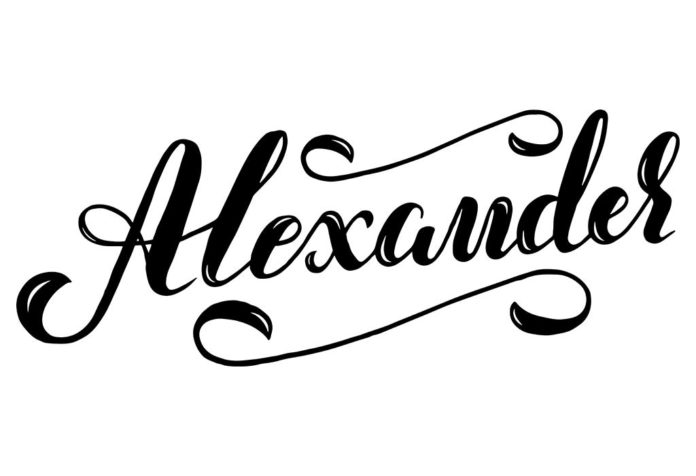 Derived from the Greek name Alexandros, Alexander means ‘defending men.’ According to Greek legend, the first Alexander was Paris, who was bestowed the nickname Alexander by shepherds as he had defended their flock of sheep from robbers. Alexander the Great or Alexander III was the ancient king of the Greek kingdom of Macedonia.

What Does Alexander Mean?

The meaning of Alexander refers to a ‘warrior,’ ‘protector of mankind,’ or ‘defender of man.’ In Greek, it means “battle-prowess,” attributing to the ability to withstand or push back an enemy battle line. The Greek Goddess Hera was honored with the name and means “one who comes to save warriors.” Alexander takes the form of Alex, Alexa, Alexandria, or Alexandra as a girl’s name.

Alexander is a common Dutch, English, German, Hungarian, and Slavic name of Old Greek origin. It is the Latin form of the Greek name Aléxandros, composed of the elements Aléxein, meaning “to defend” or “ward off,” and Aner, meaning “man.” The name’s Gaelic form is Alasdair that has been Anglicizedto Alexander as a common forename in Scotland. It is one of the many cognate names from other languages that have been absorbed in North America after the immigration of many Scottish-Irish families. Adopted in Hebrew, the name Alexander is also found throughout the New Testament, with at least twenty Christian saints, including a patriarch of Alexandria, three Russian emperors, and eight popes with the name Alexander.

How Popular Is the Name Alexander?

After the legendary hero and warrior of the 4th century BCE, the fame of the name Alexander spread in the post-Classical era throughout Europe. It is of particular prominence to Scotland, where it is still considered to be a royal name. The name has consistently scored high in the Top Baby Boys’ Names in the U.S. and the U.K. Remaining as one of the top 250 names in the U.S. since 1900, Alexander’s popularity has never really waned. It emerged into the top 100 names in 1977 and steadily climbed up the ranking chart until 2009. Between 2008 to 2015, Alexander’s baby name ranking remained in the top 10 names till 2020 as per the Social Security Administration data.

The popularity of the name Alexander

Search trends for the name Alexander show mostly in Austria in the last ten years. Sweden, Germany, Australia, and Norway follow to complete the top 5 countries. As a classic Christian name, Alexander can be a reason for its popularity in Austria, as parents still look for historical names of great significance.

Alabama is the sub-region in the U.S. where the most searches for the name Alexander have been recorded the highest over the last ten years. Search trends show cities like North Carolina, District of Columbia, New York, Pennsylvania have the most interest, rounding up the top five positions.

Middle Names That Go With Alexander

Middle names balance with the first name and make it sound more appealing. Here are some of the best double names with Alexander that fit perfectly and live up to it most beautifully:

Nothing gives your baby name choice credibility like having one of the rich and famous using it too. Here are some of the most famous celebrities named Alexander:

Names that rhyme with Alexander are as charming and posh as the classic name. Here are some names that have the same traditional and timeless appeal as Alexander:

It would help if you chose sibling names to strike a balance of coordination. Thus, when you name your boy Alexander, you already need to have a repository of sister names and brother names for Alexander handy in preparation for the potential future offspring. Here are some of the sensible sibling names that go with Alexander:

A strong and dependable nickname that is a shortened version of the first name helps to make the name and the person bearing the name more lovable and adorable. Here are some of the best nicknames for the name Alexander:

Associated with the qualities of ‘bravery’ and ‘courage,’ Alexander is a masculine name that rose in popularity in the Middle Ages and became a favorite among parents for decades. The name continues to be used around the world, and if you choose this name for your boy, you will be raising a boy of high morals and courage reflected in the name.

How to Raise a Responsible Little Citizen

Importance of Job Satisfaction and How to Achieve

Your Hospital Bag Checklist for Delivery