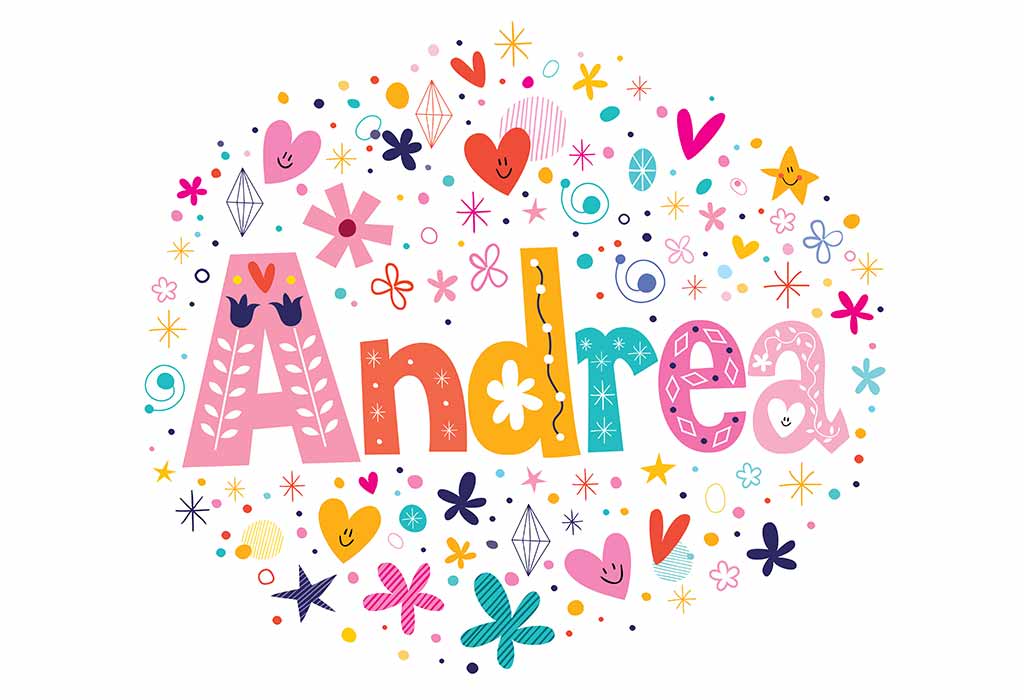 Andrea means “strong and brave” or “manly and virile” as per the name’s Greek, German, English, and Italian origins. It is the feminine form of Andrew, commonly used as a male name in several European cultures. In recent years, it has also been used occasionally as a female name in Italy and Spain, where it is a legitimate feminine form of Andrés/Andreo/Andreu (Andrew). In its Italian variation Andreas, Andrea ends with ‘s,’ which is another male name along with a host of other similar names in Italy.

What Does Andrea Mean?

Derived from the Greek word (anēr), genitive (andrós), the meaning of Andrea is ‘man,’ ‘strong,’ ‘courageous,’ or ‘warrior.’ The original male Greek name, Andréas, represents the hypocoristic, with endearment functions, composed with the andr- prefix. The same root andr- denotes the male gender as used in misandry (the hatred of men), andrology (male physiology), androgens (male hormones), and polyandry (the practice of taking more than one husband at the same time).

Andrea has traditionally been a popular name, dating back to the New Testament. According to the Bible, Saint Andrew was one of the earliest disciples of Jesus and one of the twelve Apostles to become the patron saint of both Scotland and Russia. Andrea in Filipino comes from a local form of the personal name Andreas. Andrea comes with a good selection of pronunciations like ANN-dree-a, AHN-dree-a, AHN-dree-a, or ahn-DRAY-a that have slightly different meanings, ranging from a ‘girl next door to slightly affected to mysterious.’

Name variations are equivalents that can be substituted for the original name in some other context. Here are some of the Andrea name variations and other spellings for Andrea that have foreign manifestations and are sometimes used in the US.

How Popular Is the Name Andrea?

The Andrea baby name ranking hasn’t been knocked out of the Top 100 since 1962. According to Social Security Administration data, the Andrea popularity ranking waned slowly after remaining in the top 100 from 2000 to 2012. Despite the slow decline, it remains in the top 150. Having spent in the top 100 from 2000 to 2012, with 2001 getting maximum attention, Andrea held the 148th spot in the United States in 2020. Countless on-screen characters named Andrea appearing in the original Beverly Hills 90210, The West Wing, and The Devil Wears Prada have contributed to the surge in its popularity. Considering its Biblical reference and two American presidents with the male variation of the name, namely Andrew Johnson and Andrew Jackson, it has certainly helped make Andrea a fairly popular choice for parents.

Search trends data for the name Andrea record a consistent interest of over 70 over the last five years, reaching 100 in July 2015. The lowest interest recorded was 49 in October 2021.

Interest in Andrea – US

Search trends for the name Andrea have recorded a consistent search popularity of over 60 over three years, reaching 100 in June 2013. The lowest popularity was recorded at 46 in September 2020 and March 2021.

Popularity of the name Andrea

Search trends for the name Andrea show the highest interest in Italy over the last decade. Countries like Mexico, Slovakia, Hungary, and Australia follow close behind. Andrea has been a lasting favorite in Italy for girls, even in the modern day.

Search trends of Andrea in the US

Among the sub-regions of the US, the District of Columbia has led the search trends for the name Andrea over the last ten years. Rhode Island, Massachusetts, Connecticut, and New York follow close behind to occupy the top 5 positions.

Middle Names That Go With Andrea

Middle names can have a positive impact on the overall appeal of the name. Here are some of the best double names with Andrea that may have both ageless and modern appeal:

Names of celebrities can play a huge role in propelling your child to stardom. Here are some famous people called Andrea who can inspire you to adopt their names:

Names that rhyme with Andrea may strike a musical note with their phonetic effect. A traditional name like Andrea can be made to sound more refined, quirky, and appealing to new parents with these similar-sounding names:

Sibling names can either share a common theme, origin, or meaning or be entirely different. Here are some of the most well-coordinated sibling names that go with Andrea and foster a harmonious relationship between them.

Nicknames represent a sense of belonging and illustrate your child’s best qualities. Here are some of the cool, silly, and super sweet nicknames for the name Andrea. :

With its meaning denoting attributes associated with manliness, Andrea has the edge over other classics as it avoids years of overuse to remain a timeless wonder.