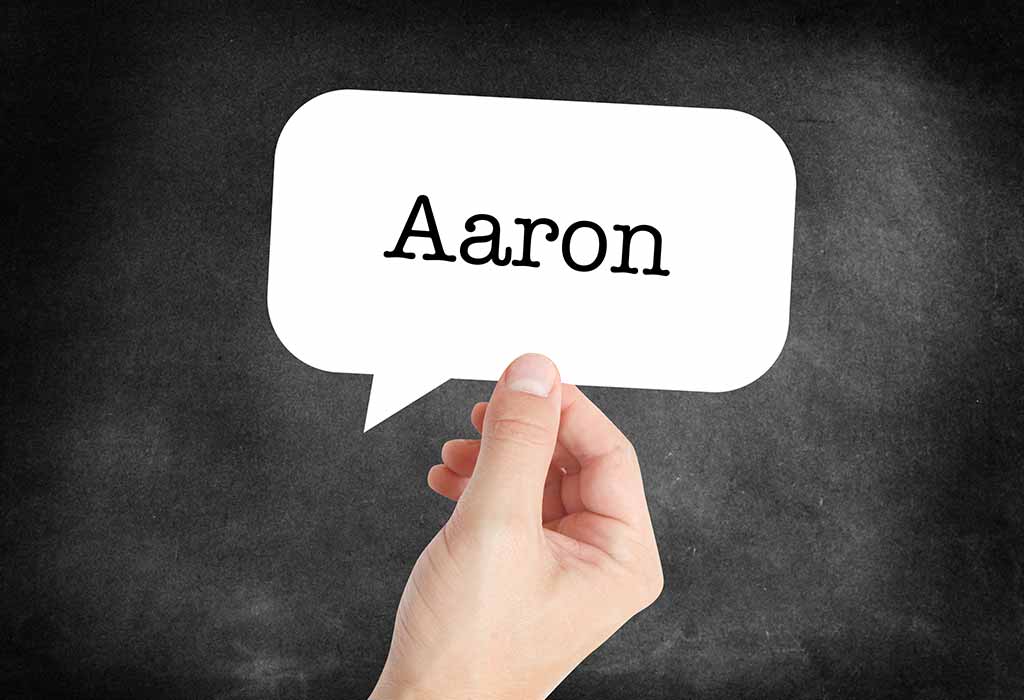 The name Aaron evokes the nostalgia of the glorious 2000s when many movie characters and actors bore the name. Although the name has slightly decreased in usage, its meaning and origin make it worthy of making a comeback as a baby name for boys. Get to know all about the name Aaron here!

What Does Aaron Mean?

The name Aaron is derived from Hebrew origin, and the meaning of Aaron as per this origin is “exalted” or “strong.” As per its Hebrew origin, the name can also refer to “high mountain” or “enlightened,” pointing to the intended character and personality of the person who is given this name. Thus, in general, the meaning of the name as per its Hebrew roots is “shining light,” while the Arabic version of the name primarily indicates a “messenger.”

The exact origin of the name cannot be determined since the name has been influential in many cultures and roots. However, the Hebrew roots of the name are the most well-known, especially since Aaron was the brother of Moses and the first high priest of the Israelites. The name was initially spelled as Aharon in Hebrew, where the ‘H’ was dropped when translating the name to Greek. Among other cultures, the name was spelled as Aaran in Yiddish and Haroun in Arabic.

The presence of a name in other cultures gives an insight into the cultural variety within a single name. In this regard, through identifying different Aaron name variations in different cultures and other spellings for Aaron, one can understand the cultural diversity and relevance of the name.

How Popular Is the Name Aaron?

As per the latest SSA data, the Aaron baby name ranking in 2020 was 63 in the US, the highest since 2000. The name was used for 0.275% of names for baby boys in the year. The similar name Aron was ranked at 743 in 2020. Thus, from evaluating the popularity chart in the US, the name can be stated to dwindle in popularity gradually. While it may still be used as a middle name, its popularity as a first name is undoubtedly reducing.

Interest in the name Aaron can be observed to have been considerably volatile over the past decade. While most of the interest trendline has been considerably low, the name observed visible moments of heightened interest in April 2017, June 2013, and January 2020, when it scored 100, 93, and 92 on the popularity scale, respectively. Similarly, the lowest interest at 28 was also reached thrice in the past decade, in March 2012, May 2012, and June 2020.

Interest in Aaron – the US

Interest over time in the US closely mirrors global interest, especially since amid considerably low interest throughout the decade, the name gained popularity in April 2017, June 2013, and January 2020, at 100, 89, and 86, respectively. Similarly, the lowest interest was recorded at 20 in March and May 2012, imitating the lowest interest observed globally in these ten years.

Popularity of the name Aaron

As per the global search trends, the US has generated the highest search interest among all nations in the decade-long period. It is followed by New Zealand, Canada, Ireland, and Australia, which rounds up the top 5 countries with the highest interest.

Search trends of Aaron – the US

Among the sub-regions of the US, Wisconsin has generated the highest sub-regional popularity within the last decade. It is followed by Minnesota, Massachusetts, Rhode Island, and South Dakota, where search interest for Aaron has been high.

Middle Names That Go With Aaron

Choosing suitable double names with Aaron is another daunting task since the full name has to sound beautiful and flow nicely when said together. Thus, for Aaron, you can choose from the following middle names:

Since long ago, popular personalities with the name Aaron have further helped solidify the name as a beloved name for baby boys. These famous people, some of whom have been listed below, perfectly embody the essence and meaning of the beautiful name.

There are many baby names like Aaron that perfectly grasp and embody its meaning. If you do not have suitable family names for Aaron, you can instead use these and maintain its beautiful meaning. Some other names for Aaron are:

Along with other names with similar meanings and essence, there are many names that rhyme with Aaron. If you like the phonetic aspects of the name but want to go for another name, you can get inspiration from these:

When choosing names for your multiple children, it is necessary to ensure that they have equally beautiful names. So, choosing sister names for Aaron along with complementary brother names for Aaron is a crucial requirement. Some sibling names that go with Aaron can be:

Your task as a new parent does not end with choosing a beautiful name for your son. You also need to get creative to call your child fun, adorable, wacky, and downright affectionate nicknames. If you are confused as to which nicknames to choose, these ideas can help you:

Choosing the perfect name for your child can be one of the most difficult tasks indeed, especially since they will presumably live with the same name their whole lives. Thus, such information on the name Aaron can help you either shortlist it or remove it from your list. Whatever your decision is, keep in mind that whichever name you choose for your boy, their name will play a considerable role in allowing them to shape their personalities so they can live up to it.