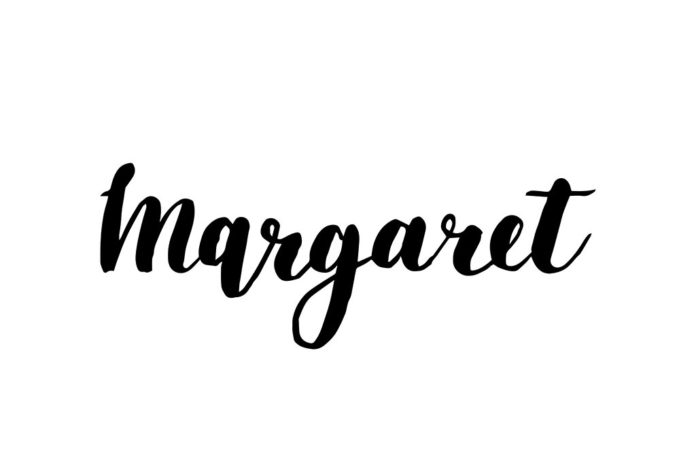 Meaning and Origin of Margaret

Margaret is a given name for girls that comes from Latin Margarita, which was from Greek Margarites. The Hebrew word “margaron” means “pearl.” The Greeks might have borrowed these names from Persian. The old French form of Margaret is Marguerite, which is named after a  flower, that is “daisy.” Saint Margaret was a famous bearer of this name who was martyred at Antioch in the 4th Century. The saint was highly popular during the Middle Ages when her name was widely used among the Christians of England and Wales.

Popularity of the Name Margaret

Margaret is an English name that has been in use since the eleventh Century down through the Middle Ages. After a brief period of a lull between the sixteenth Century and eighteenth Century, it gained back favor again, claiming the second spot among the most popular name for girls in the United States in 1903. Although it became less common after that, it was still the ninth-most common name for women in the United States as per the 1990 census. According to Social Security Administration data, Margaret has ranked at number four and held a position on the charts under 10 until 1937. This ultra-feminine name has been closely identified with actress Margaret Sullavan, British prime minister Margaret Thatcher, anthropologist Margaret Mead and writer Margaret Mitchell who have contributed to the immense popularity of the name among new parents.

Famous Celebrities With the Name Margaret

Celebrity monikers like Margaret have won fame and widespread recognition for their outstanding achievements. Here are some notable celebrities with the name Margaret who may help your child to cultivate a persona:

Name – Who She Is

Saint Margaret of Wessex – The Pearl of Scotland

Margaret – I Queen of Denmark

Margaret of Anjou – Queen Consort of Henry IV of France

Margaret of Provence – Queen Consort of Louis IX of France

Variations of Margaret recognize the alternative forms of the name with the same or different meanings in other languages. Here are some variations of the name Margaret that have gained favor on an international level.

Parents often pick names like Margaret that have a strong sound and classic status. Unique nicknames for Margaret may make a fashionable choice for girls who are as precious as the meaning of the name suggests. So, take this article as a guide and choose stunning or adorable nicknames for the name Margaret that also flaunt your creativity.

A Perfect Blend of Caring, Loving Mom and Responsible Wife

Wearing a Bra During Pregnancy

Journey of Motherhood: Being a Mother Is Amazing, While Trying to Be a Know-it-all!

Tips to Solve Food Issues While Travelling With an Infant