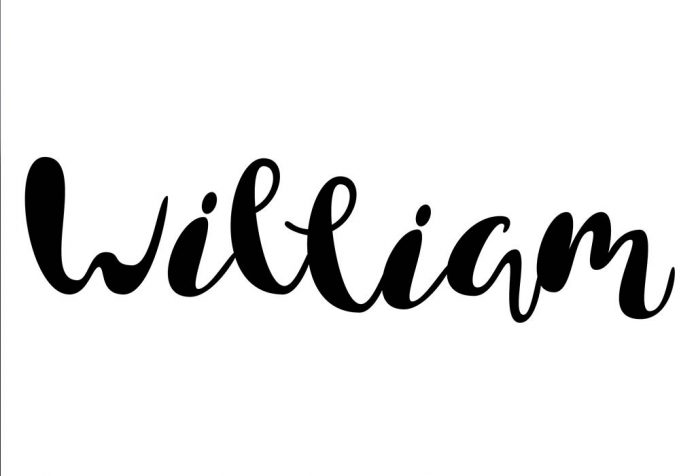 The name William is of Germanic origin. William the Conqueror first introduced this name in England at the time of the conquest. Formed by a combination of “Wil,” meaning “will or desire,” and “Helm,” the meaning of William is “helmet, protection,”

William has been traditionally a masculine name with French, English, German, and Teutonic roots. Its feminine variations include Wilhelmina, Wilma, and Billie. As per a notable legend centered around a festival held in the year 1171, King Henry named 100 knights of William name known as the “Williams” over a dinner party in which only the ones named William could participate.

What Does William Mean?

William is an English variation of the German name Wilhelm. Derived from Germanic/Belgic “Guild-Helm,” the meaning of William is “harnessed with a gilded helmet.” It’s said to mean “determined” or “resolute protector” or “strong helmet,” which is a resolute protector in itself. It can also mean ‘strong-willed warrior’ or ‘Warrior of God.’

The English “William” is taken from the Anglo-Norman language and was transmitted to England after the Norman Conquest in 1066. This name gained popularity in the English language around the 11th century as William the Conqueror was recognized as the first Norman king of England. Wilhelm comes from the Germanic root Wilhelm, composed of Wil (will or desire) and Helm (helmet or protection).

Many of the traditional names commonly used today in the United States have other forms in various languages. Here are some of the William name variations and other spellings for William that are modern forms while staying true to the spirit of the name:

How Popular Is the Name William?

Since many prominent figures have adopted this powerful classic name, it has consistently remained popular in the US in the 20th and 21st centuries. As per data collected by the Social Security Administration, it has enjoyed Top 10 status during the first 75 years of data collection. Although William’s popularity has dropped from 1976-2005, the lowest ranking ever reached was No. 20 in the 1990s. In 2017 and 2018, 14526 boys were named William in the US, making it the 3rd most popular boy name. Later, it became the 5th most popular name in the United States in 2020.

Over the last ten years, search trends for the name William show a consistent value of over 40, reaching 100 in April 2011. The lowest level of interest and popularity was recorded in August 2021 at just 24.

Interest in William – US

Over the last ten years, search trends for the name William have recorded a consistent popularity of over 60, reaching 100 in April 2011. The only exception was recorded in August 2021, when the popularity index of the name was just 34.

Search trends show that the name has been searched the most in the United Kingdom in the last ten years. Countries like United States, Ireland, Kenya, and Australia follow close behind. Since William has been in use for centuries in the United Kingdom, it has been particularly trendy in other English-speaking countries of the world.

Search trends of William in the US

Among the sub-regions of the US, Virginia, District of Columbia, Connecticut, Mississippi, and Delaware are the top five cities where the most searches for the name William have been recorded over the last ten years.

Middle Names That Go With William

Middle names placed after a forename help to enhance the flow of the name. Here are some ideas for double names with William that sounds trendier, and it allows you to be even more creative:

Notable celebrity names can be an excellent inspiration for parents-to-be on the hunt for a name that stands the test of time. Here is a curated list of famous people called William that will steal the spotlight:

A classic Christian name like William can be somewhat old-fashioned, making you look for alternative name suggestions. Here are some names that rhyme with William that are perfect alternatives for the classic name:

Sibling names are thoughtfully chosen to co-ordinate or complement each other. Here is a well-crafted list of some of the best sibling names that go with William:

Nicknames represent a friendly alternative for a proper name that describes a person’s qualities or is used as a term of endearment. Here are some unique and adorably classy nicknames for William:

A stalwart for many centuries, the name William has a distinct air of masculinity that has been popular throughout Western history. In addition to the pride that this name contains, the daring and energetic nature of its meaning is the main reason for its immense popularity. Thus, use this name for your son and become a part of the extensive and glorious usage of the name in different languages worldwide, even in the modern era.

How Firstcry Helped Me During Pregnancy and Post-Delivery

Starting Bananas for Your Baby for the First Time

Toddlers Going Up The Stairs!