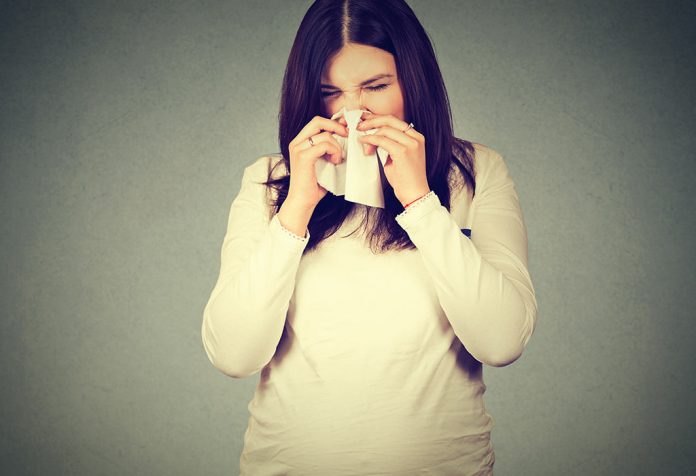 Sneezing during pregnancy is quite common and normal. The only issue is that it can be troublesome, but there is nothing to be worried about if you start sneezing more than usual during pregnancy. This condition is medically known as ‘Pregnancy Rhinitis’ and affects about 18-42% of pregnant women. Let’s take a look at how pregnancy rhinitis develops.

How Does Pregnancy Rhinitis Develop

During pregnancy, everything becomes very sensitive, including your nasal passage and your respiratory system. You could develop allergies towards the things that you were never allergic to. The increase in the volume of blood can trigger swelling of the capillaries in your nose and lead to congestion in the nasal passage. Moreover, the pregnancy hormones can cause more mucus production and can also aggravate a cold-like condition resulting in nasal congestion, sniffles, and continuous sneezing.

Is Sneezing Harmful During Pregnancy?

Every women’s’ immune system faces an all-time low during pregnancy. Low immunity causes an increase in sensitivity which results in allergic reactions and may cause inflammation in the nasal passage, throat and the respiratory system. Although continuous sneezing during pregnancy can be troublesome and tiring, it is not at all harmful.

What Causes Sneezing in Pregnancy?

Cold, sniffling and sneezing go hand in hand during pregnancy. There are many reasons for it.

Why Does Sneezing Hurt During Pregnancy?

The pain that pregnant ladies experience while sneezing is mainly due to the stretch in the round ligament that connects the groin to the front of the uterus. It is one of the ligaments that supports and surrounds the uterus. When a pregnant woman sneezes, the round ligament tightens quickly as a counter-reaction to the sudden movement. This causes a sharp pain, which is common and nothing to be worried about.

However, in some rare cases, the pain while sneezing during pregnancy can be due to some underlying health condition like a cyst. Pregnant women who suffer from sciatica or pain in the pelvic girdle may also experience sharp pain while sneezing.

Does Sneezing Affect the Pregnant Mother and the Baby? Sneezing during pregnancy is due to inflammation of the mucous membranes, which causes irritation and leads to continuous sneezing, cold-like symptoms, and coughing. If it is not accompanied by body ache and fever, it may just be a case of pregnancy rhinitis, which usually starts around the 8th week of pregnancy.

Sneezing during pregnancy can be termed as safe for the mother as well as the baby in the womb. It usually disappears in a couple of weeks after the delivery. Although it is absolutely normal and nothing to be worried about, in some rare cases, it can trigger back pain, stiffness in the jaw and injury in the respiratory tract. The baby, however, is very well protected in the womb. She may feel like being rocked when her mother sneezes, so she actually feels comfortable inside the womb.

Urine Leakage Due to Sneezing During Pregnancy

Urine leakage is a common thing in pregnant women when they sneeze. This happens because the growing uterus rests on top of the bladder, which gets pressed every time a pregnant woman sneezes. This may be embarrassing as well as uncomfortable for most mothers-to-be, and there is very little one can do about it. However, practising Kegel exercises to strengthen the pelvic muscles may help stop it. One may even use panty liners to avoid embarrassing situations.

How Should You Deal With Sneezing During Pregnancy?

Sneezing during pregnancy or pregnancy rhinitis is troublesome at all times. A pregnant woman suffering from it can get tired and feel drained out on account of continuous sneezing. Therefore, finding ways to combat it is necessary. Listed below are some ways pregnancy rhinitis can be treated:

Treating sneezing in pregnant women can be quite a task because they cannot take most of the medications they could take before. However, you can seek medical advice on the issue. The doctor may prescribe analgesics or antihistamines, depending on the diagnosis.

During pregnancy, it is best to try out natural remedies before taking any kind of allopathic medication. Here is a list of some natural home remedies that you could try to cure sneezing during pregnancy.

Continuous sneezing during pregnancy is quite bothersome, but sneezing should not cause any worry. However, if you have the following symptoms along with sneezing, call for your doctor immediately.

How to Prevent Sneezing During Pregnancy?

Sneezing during pregnancy or pregnancy rhinitis is common in the first trimester because that is when your body is very low on immunity. It usually causes sharp ligament pain in the second trimester, while it gradually disappears in the third trimester. So, it’s quite normal to experience sneezing during pregnancy. However, there are ways you can prevent it, especially is you suffer from rhinitis/allergies. Here are a few ways you could do that.

Sneezing is due to an infection in the upper respiratory tract. It is caused by bacteria or viruses, and usually, there is nothing to be worried about. But, at times, the infection could spread to other parts of the body resulting in severe conditions. Therefore, it should be prevented as much as possible or treated immediately.

How Can Parents Help Kids in Easing Their Post-vaccination Pain?

How to Raise Happy Kids

When Should Parents Start Reading to Their Babies

Crib Tents for Babies: How to Choose, Safety Tips & More