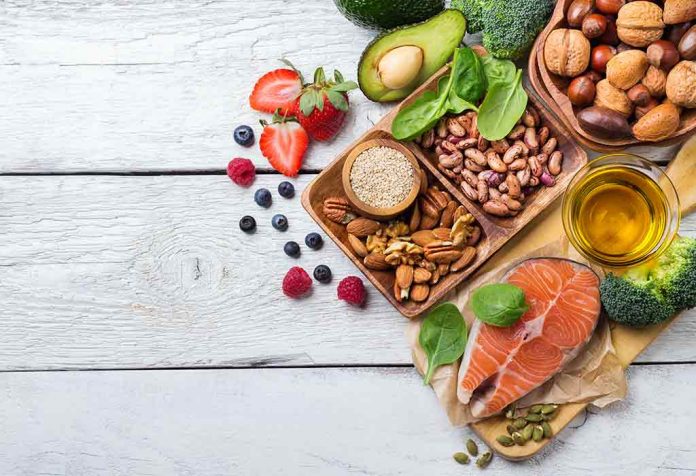 As the name suggests, the Dietary Guidelines are guidelines for diet prescribed by the United States of America’s federal government. It is a report which is backed by strong scientific evidence and expert advice on food intake, nutritional value, and health advice for American citizens. This report is released every 5 years, with a tremendous amount of research and effort.

What Is “U.S. Dietary Guidelines for Americans” All About?

It is a guidebook for the eating habits of all American citizens. It tells the country’s people what they should and should not eat. It also guides readers on the nutritional value of the prescribed food intake and safe/healthy consumption amount. These USDA dietary guidelines are meant to educate and push the average American to eat healthily and remain fit. More than half of the average American adults suffer from severe issues/diseases linked with the digestive tract. Therefore, this report finds great purpose in driving America towards a healthier and safer tomorrow.

Who Issues These Guidelines and Why?

The U.S. Department of Agriculture (USDA) and the Department of Health and Human Services (HHS) release this report in collaboration at an interval of every five years. In these five years, they continue serious efforts and strive to provide the most updated dietary recommendations based on the latest findings on the scientific research front. A team of experts and leading scientists comes together to produce this research-heavy document to promote healthy living through healthy eating.

The new dietary guidelines bring in some striking changes as compared to the previous report. These changes are largely reflected in the format and structuring of the report versus the content. Many of the fact-based recommendations have remained the same as the previous years, but there has been a significant change in the design of the guidelines. For the first time in this report’s history, the dietary guidelines committee has released a detailed document that caters to all age-groups. The guidelines have been prescribed for people ranging from 0 years to the oldest citizens. This broad range certainly caters to most of the dietary advice and nutritional needs of infants, children, youth, adults, and older people.

The report also offers four dietary guidelines that reflect the key recommendations of the 2020-2025 offerings. The information on each of these recommendations is summarised below.

Special recommendations for pregnant women and lactating mothers state that they should intake seafood as it directly correlates with the fetus’s cognitive development. The prescribed quantity is mentioned to be 8-12 ounces of seafood per week. However, there is a catch to this recommendation, which is elaborately dealt with by the USDA. An ingredient present in seafood, methylmercury, must be avoided by all means. Special care must be taken for pregnant women in choosing seafood that is specifically low in methylmercury content.

The 2020 committee was able to deduce that dietary fat intake primarily in the form of “saturated fat” had been beyond the recommended limit. Therefore, there was a strong need to reassert the need to limit dietary fat intake to 10% of the consumed calories per day. The guidelines have also encouraged that saturated fat in food ingredients be replaced with unsaturated fat.

The USDA 2020-2025 report urges Americans to limit their consumption of items containing added sugar. Added sugar and sugar by themselves can be particularly harmful. Therefore, its permissible and recommended limit has been reduced to 6% of total calorie intake, from 10% of total intake. The report has also issued a caution against a couple of categories of items that are more likely to contain added sugar: sweetened beverages, desserts, coffee, tea, candy, sugars, breakfast cereals, and bars.

A clear recommendation from the guidelines committee happens to be that people must seriously limit their consumption of Sugar-sweetened beverages (SSBs) and tweak their lifestyles to move to low or no-calorie sweetened beverages. This is because most beverages primarily contribute to the hydration needs of an individual. Only particular beverages such as milk and 100% juice manage to create the same kind of impact, such as other high nutritional value foods, contributing to their nutrient intake.

With recommendations being 2 drinks per day for men, the 2020’s report has different results to inspire past editions. It recommends men to limit their alcohol consumption to one drink per day. This recommendation is the same as that for women.

Child nutrition guidelines are fascinating because never before has the committee addressed the age-wise needs of individuals. Despite the age-spectrum being vast, the 2020-2025 report has managed to be highly specific and sensitive to the needs of various age-groups, especially children.

There is limited research on lactating mothers. Thus, the committee has had to fall back on its prior recommendations. The committee continues to advise lactating mothers to consume seafood and folic acid. However, there is no scientific evidence to prove an improvement in the status of milk production in the mother through these nutrients.

There is limited evidence on the relationship of frequency of meal consumption with the health of the individual. However, research has indicated a strong correlation between eating habits, quality of food, and socioeconomic status across the American demographic.

9. Recommending Water Instead of Milk

About 30 to 50 million American adults happen to be lactose intolerant. Besides, several other risks are associated with heavy consumption of milk and other dairy products, as suggested by research, namely: asthma, breast, ovarian, and prostate cancers, cognitive decline, gas, bloating, diarrhoea, and early death. Thus, all evidence suggests a gradual shift from dairy consumption for adults to a neutral and relatively balanced drink, “water.”

Plant-based food provides a wholesome meal that caters to the various nutritional needs of an individual. Vitamins, minerals, and fiber are rich in plant-based foods, while it offers lower saturated fat content, cholesterol, and calories. Plant-based diets also yield a sufficient amount of Vit. B12, calcium, protein, etc. which are quintessential.

Plant-based eating patterns have also evidently resulted in a lowered risk of heart disease, diabetes, obesity, certain types of cancer, asthma, and maintaining a balanced weight through a balanced diet.

1 out of 10 Americans consumes the necessary amount of carbohydrates in the form of fruits and vegetables. The statistics also indicate early deaths resulting from limited or nearly no intake of carbohydrates. Thus, the guidelines have surprisingly recommended ensuring a substantial intake of carbohydrates rich in fiber. These can be gained from the consumption of fruits, vegetables, grains, and legumes. Reduced risk of heart disease, type 2 diabetes, and obesity can be directly associated with balanced carbohydrate intake.

The risk associated with consuming processed and red meat is strong and based on significant scientific research across the globe and within the United States of America. American adults consume uncanny amounts of red and processed meat in the form of bacon, deli meat, and hot dogs. Surveys and studies indicate that processed meat results in a drastic increase in breast cancer risk, prostate cancer, pancreatic cancer, and overall cancer mortality, heart disease, stroke, or type 2 diabetes. Thus the guidelines have issued a warning against such meat consumption, attempting to usher a shift to plant-based eating patterns.

The average sodium intake of Americans of all age groups happens to be high, owing to its presence in most subgroups’ food items. The average US–food style pattern offers large amounts of sodium in sandwiches, burgers, tacos, rice, pasta, grain dishes, pizza, meat, poultry, seafood dishes, and soups. However, the recommendation is to limit the consumption the safe CDRR limit (Chronic disease Risk Reduction), which is that of 1,200 mg/day for ages 1-3; 1,500 mg/day for ages 4-8; 1,800 mg/day for ages 9-13; and 2,300 mg/day for all other age groups.

How to Incorporate These Guidelines in Your Daily Diet

The guidelines’ key recommendations are critical to note that one’s daily food intake must include less and less saturated fat, alcohol, sodium, and added sugars. This is the crux of the guidelines, and if one can ensure to limit the intake of such items while replacing them with a balanced consumption of nutrients from various food groups such as fruits, vegetables, legumes, grains, and water – then one can successfully incorporate these recommendations into ones’ daily diet.

There are some concrete steps one can take to implement these guidelines, as proposed by the “My Plate Plan”:

The guidelines for 2020-2025 take a holistic approach to offer heath and dietary advice to a wide spectrum of audiences. The recommendations are research-based and are supported by studies from across the planet. The committee preparing the report consists of health, nutrition, and scientific experts committed to the cause of healthy eating with the healthy living of the American citizen.

Never Say Never!! – My Take Away from My Second Normal Delivery

My Heart Aches As I’m Quarantined. The Kids Are Around, Except Right Here and It Hurts

6 Reasons to Make Up With your Best Friend Today!