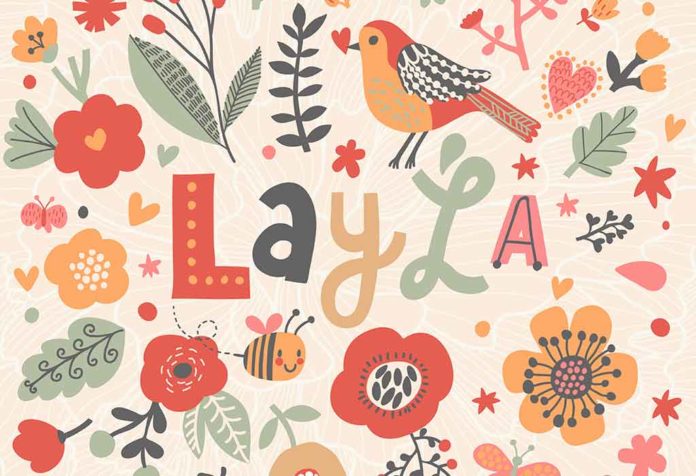 The name Layla is one of the most unique and gorgeous names. Although the name did not receive enough fame in the 1900s, its popularity has risen since early 2000. The name became famous after the song “Layla” by Derek and the Dominos, which led to more and more people noticing this name.

What does Layla mean?

Names with mysterious or vivid meanings are popular qualities factors look forward to when naming their child. The meaning of Layla is “night” or “dark,” which signifies babies born during the night. The name can also be interpreted as “dark beauty,” giving it a unique touch.

The name Layla stems from Arabic and Hebrew. One can identify the name’s popularity from the Arabian legend of Qays and Layla. Its popularity also comes from the story of Layla and Majnun written by the 12th-century Persian poet Nizami Ganjavi.

A name can have multiple variations from different origins. Other spellings for Layla indicate the cultural significance of the name in the world. Therefore, some of the Layla name variations are:

How Popular is The Name Layla?

The interest in the name Layla has been consistent over the last decade. The name maintained a rank over 55 across the globe, reaching its highest point in August 2012, followed by April 2017. The name acquired its lowest point in October 2019. Although the popularity of the name has faltered since June 2017, it shows potential in terms of gaining popularity.

Interest in Layla – the US

In the US, the interest in the name Layla has experienced an up and down curve over the last ten years. The name has maintained a rank over 50 and has reached the highest in April 2017. The name experienced a downward slope; however, it soon peaked in April and June 2020, followed by August 2021.

The Popularity of the name Layla

The search trends across the world indicate the name Layla’s popularity in Lebanon is the highest. It is followed by Morocco, Algeria, Tunisia, and Azerbaijan. According to these trends, the name has been the most popular in these countries in the last decade.

Search trends of Layla – the US

In the US, the search trend for the name Layla is the highest in Connecticut. At the same time, Missouri, District of Columbia, Delaware, Alabama are the other cities among the top five list where the name is the most searched. This indicates the popularity of the name and its usage in these cities in the last ten years.

Middle Names That go With Layla

Often people don’t give middle names their due importance. They are equally vital as our first and last names. Therefore, you need to choose proper middle names when choosing them for your child. Accordingly, some of the double names with Layla are:

The impact of celebrities on name trends is significant. The popularity of celebs results in the increase or decrease of a name’s popularity. Therefore, some of the stars named Layla are:

Baby-names like Layla have many variations with the same meaning. The spellings of such names are different; however, the meaning remains the same. Therefore, some of the proper family names for Layla, along with other names for Layla, are:

There are a plethora of names that have similar-sounding names with a chosen name. Hence, this list presents some of the names that rhyme with Layla:

Selecting names for your children should be done with careful consideration. By maintaining a flow among the sibling names that go with Layla, you can ensure a uniformity amongst all your children’s names. Therefore, the sister and brother names for Layla are:

Close friends or family members give nicknames or pet names. They are frequently used instead of the proper name. Some of the quirky nicknames for Layla are:

The popularity of the beautiful name Layla had significantly increased since 2006 when it entered the top 100 baby names list in the US. The increasing use of the name has resulted in the name being one of the most used names. This suggests the name’s elevated use and scope for further gaining rank in the name list in the future.

5 Tips for Rocking Your First Day At A New Job

Low Lymphocytes during Pregnancy – Should You Be Worried?