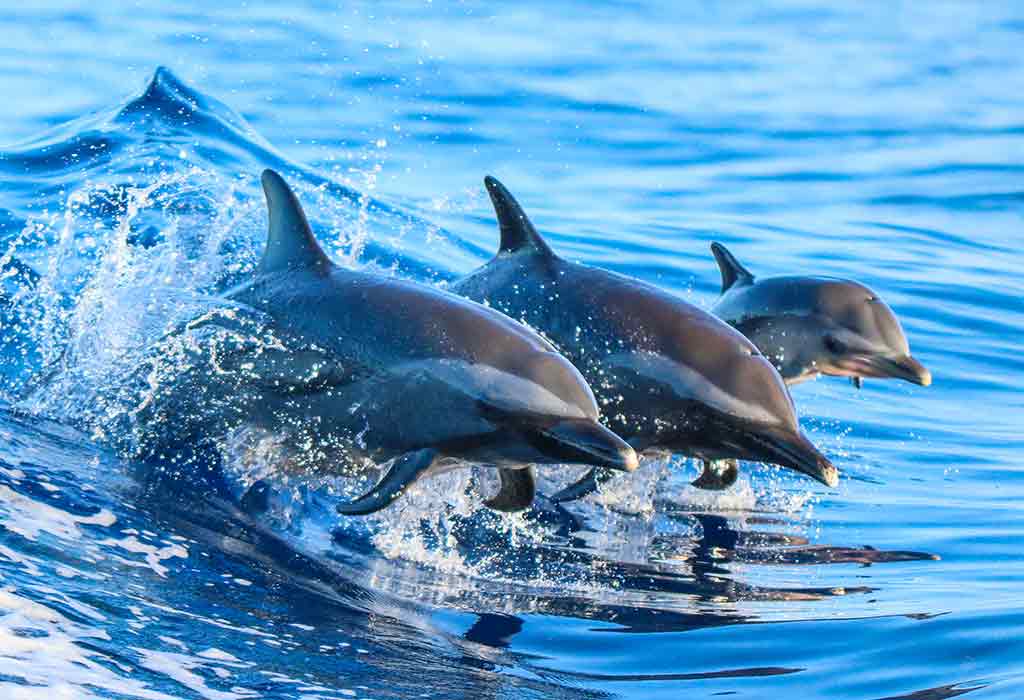 Dolphins are one of the most adorable, smart, and friendly marine mammals. Dolphins can be found all over the world and they are closely related to whales. If your children love animals, sea animals, to be precise, they will love to learn about dolphins. In this article, we’ve covered some interesting facts about dolphins. Read these facts and tell them to your kids!

Fun Facts About Dolphins for Children

Despite the fact that this adorable ocean animal is popular among kids as well as adults, there are many facts that many people may not know about dolphins. Here are some exciting and entertaining dolphin facts for kids that will make your kids love these sea animals even more.

Dolphins are extremely intelligent. Apparently, dolphins are as smart as apes, and the evolution of their brains is very similar to that of humans. Dolphins can recognize themselves in the mirror, and after humans, dolphins are considered the second most intelligent mammals on the planet.

2. Dolphins are found all around the world.

These stunning animals are found in almost all parts of the world, which includes oceans, estuarine, coastal and freshwater, and in temperatures that can range from 0 degrees Celsius to 30 degrees Celsius. Though most species are confined to coastal, temperate and tropical oceans, there are around five species of dolphins that are found in freshwater rivers.

Dolphins live and travel in groups knows as pods. They also hunt and play together. Some large groups, also known as ‘Super pods’, can have as many as 1000 dolphins in them. Scientists have observed that dolphins address each other with names, which is characterized by individual whistles or sounds. They also use various kinds of sounds such as clicks, moans, groans, barks, squawks, etc. to communicate with each other.

4. There are more than 40 species of dolphins.

When it comes to swimming, dolphins are considered fairly slow swimmers and they usually swim at a speed of 2 mph; however, they can swim up to 30 mph for brief durations. But dolphins are great divers and can dive more than 1000 feet deep underwater.

6. Dolphins stick with their mothers for a long time.

Baby dolphins or calves stick with their mothers for 4 to 8 years after birth. Mama dolphins also sing to their unborn babies according to research. The research further supports that these songs are whistles that dolphins teach to their unborn babies. Whistles hold a great significance in the dolphin world as the individual whistle is associated with each dolphin’s identity.

7. Bottlenose dolphins can live up to 40 years.

Although a dolphin’s lifespan depends on its individual species, however, most species of dolphins live between 15 to 16 years of age. But bottlenose dolphins can live up to 40 years of age.

Dolphins are carnivores, which makes them active predators. They eat wide varieties of food that can vary from their geographic location, and they also have preferences for certain kinds of foods. However, majorly dolphins prefer eating fish, squids, shrimps, and other such water animals. Dolphins also have two stomachs; one is used for storing the food consumed and the other stomach is used for digesting the food. They have an array of teeth, but dolphins only use them for catching their prey. They do not chew their food but swallow it whole.

9. Dolphins sleep with one eye open.

One of the interesting facts about dolphins is that these sea mammals sleep with their one eye open. This happens because their brain sleeps in shifts, which means their eight hours of sleep is covered in two shifts of four hours each that is covered by both sides of the brain simultaneously. The awake side of the brain stays active and helps the dolphin from drowning and being aware of predators and that side of the eye also stays open.

10. A dolphin’s skin can regenerate every two hours.

A dolphin’s skin plays a crucial part in its underwater movement. The rubbery and smooth skin of bottlenose dolphins regenerates every two hours. The old cells get flaked and peeled by giving room to new skin cells. This happens to keep the dolphin’s skin smooth, which proves to be helpful in swimming and diving underwater. This skin regeneration in dolphins is almost nine times faster than in the human body.

11. Dolphins have an amazing memory.

Another piece of great information about dolphins for children is that when it comes to having a long-lasting memory, dolphins lead, hands down. Chimpanzees and elephants have been reported to have great memories too, however, when it comes to dolphins, both these mammals do not even come close.

Breathing in and out is something that comes naturally to most mammals. However, that is not the case with dolphins. Dolphins have to make conscious efforts when it comes to breathing. They make active decisions about inhalation and exhalation and they have to be fully aware of the blowhole, which needs to be above the surface of the water for inhalation to happen. Dolphins can inhale as much as eight gallons of air in a single second and exhale around 34 gallons of air, which is approximately three times faster as compared to humans. This inhalation speed allows the dolphins to replace 95 per cent of the air in their lungs in just one breath.

Dolphins are one of the most adorable animals on our planet, and they are loved by both kids and adults. We hope that the facts listed above will get your kids excited and in awe of these splendid creatures. Do share them with your children and encourage them to learn more about dolphins and other animals!