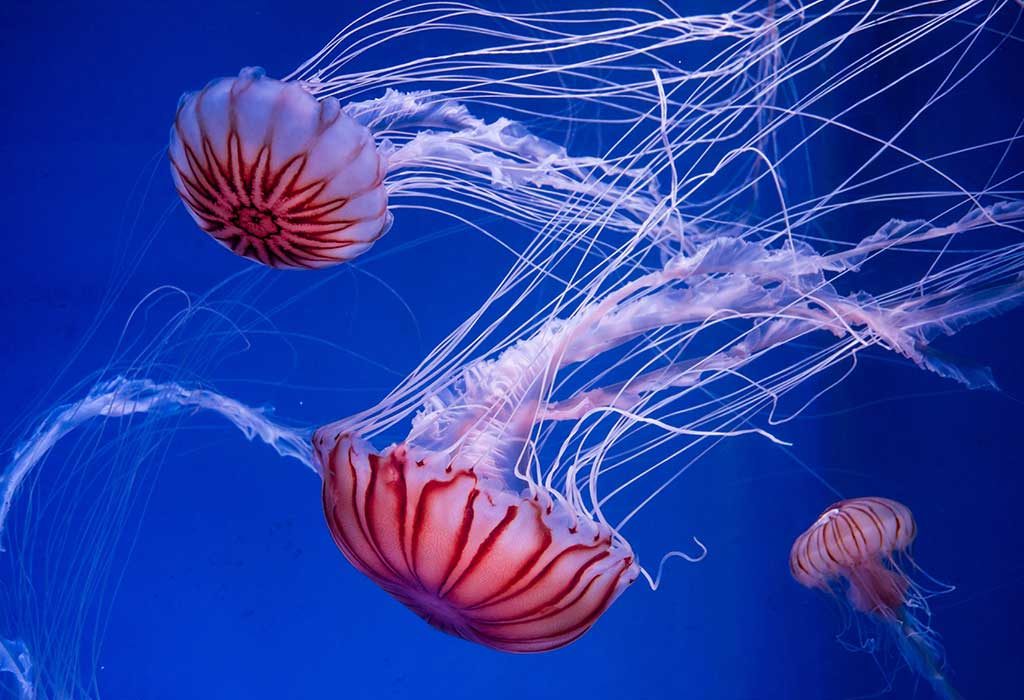 Jellyfish are the only creatures that have been on earth even before the existence of dinosaurs. They are free-swimming marine animals with umbrella-shaped heads and long tentacles. Let’s look at some more facts about this creature that has survived without a brain for more than 650 million years.

Here are some interesting facts about jellyfish for your preschooler.

Jellyfish are placed under Cnidarian phylum whose characteristic feature is the presence of a non-living and a gelatinous body embedded between the epithelial layers. There are about 2000 different types of jellyfish, and researchers believe that there are around 300,000 different species yet to be discovered.

Jellyfish come in a variety of colours and forms like white, pink, orange, yellow, blue, and green. Some of them are even multi-coloured. The body of jellyfish is composed of 90% water, and most of it is a gelatinous material referred to as mesoglea. This gelatinous material is surrounded by two layers of cells which forms the umbrella. This is called the bell.

Jellyfish have no respiratory system because their thin skin can oxygenate the body through diffusion. They do not have a central nervous system or a brain. They actually have a loose network of nerves that is present in the epidermis. This is called a nerve net, and it helps them coordinate responses and sense changes in their environment.

Jellyfish are not fish. They are plankton belonging to the phylum Cnidarian and class Scyphozoan.

Their movement depends on the tide and currents of the water and wind. Some jellyfish are very sensitive to light, making them move downwards during the day. Jellyfish die in the absence of water as it can cause desiccation.

Jellyfish are dioecious meaning that their colony will either be completely female or male. In most cases, both female and male adults release eggs and sperm into the water where these eggs fertilize and mature to become new jellies. 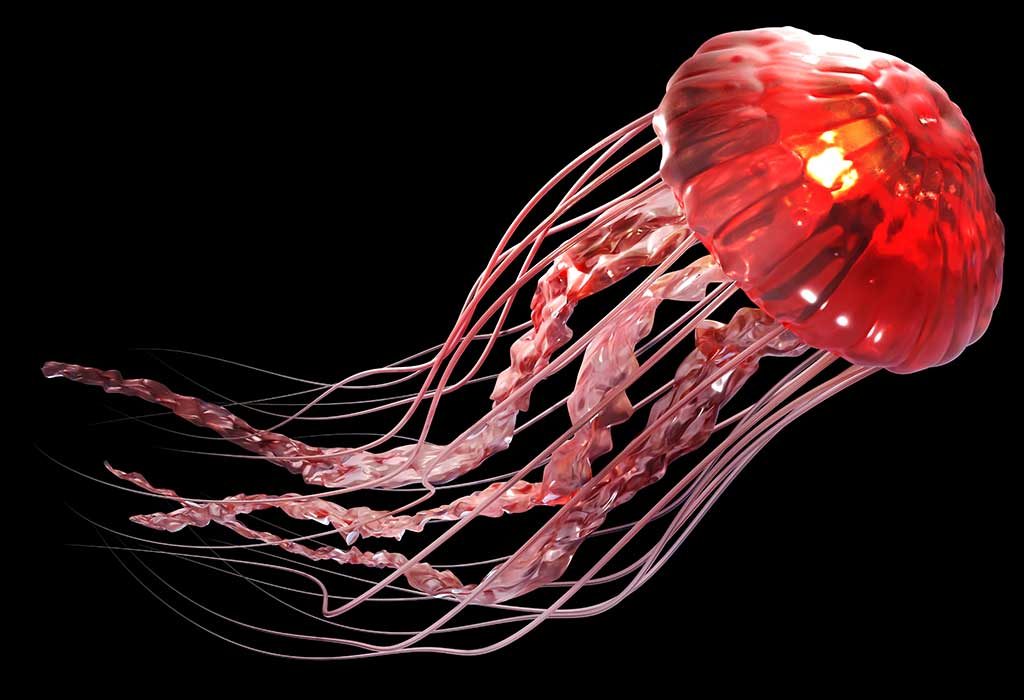 Belonging to the Staurocladia, creeping jellyfish is the smallest species of the jellyfish. It has bell discs of 0.5 mm with small tentacles that stretch out a little. They crawl at the base of the ocean and cannot be seen without a microscope or hand lens.

Though they sting, the effects are short-term and mild. These are the most common species and are found in aquariums. Since this species is minuscule, in the natural habitat, they do not live for more than six months. The factors responsible for their death are lack of food, warm temperature, and diseases. In controlled conditions, they live for years because there is no competition for food and no predators.

It has been found that jellyfish invasion can shut down nuclear reactors, most of which depend on ocean water intake. Many facilities were forced to temporarily cease operations as the swarms clogged the intake pipes.

9. Response to Other Marine Animals

Though many animals avoid jellies, some just like hanging around with them. Some marine creatures use jellies as a sort of bodyguard. For example, crabs sometimes hitchhike on jellies. Some go along with them for a ride inside the bell or just to stay very close to the jellyfish. There are many theories on why these tag-along marine creatures are unharmed by jellyfish. Some scientists say that these marine creatures cover themselves in mucus to keep the stingers from firing. The other reason is that they are just too careful to not come in contact with the tentacles.

Jellyfish, like other animals, have a life cycle. The most popular stage is the medusa stage, where they swim around in the water with their tentacles hanging down. Female and male medusa then reproduce, which result in the formation of thousands of tiny larvae. These larvae are commonly referred to as planulae. These larvae then settle down on the bottom of the ocean and then form tiny polyps. These polyps, when they grow to the medusa stage, give baby jellyfish. 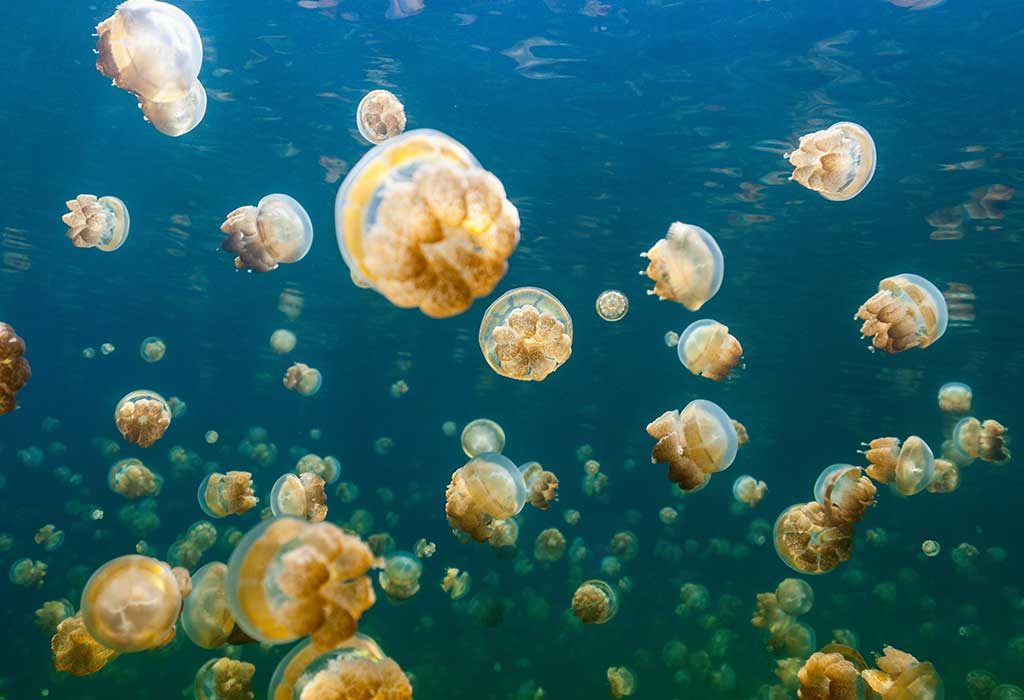 Jellyfish stings can be very painful to humans, and they can even be deadly to certain species. Most stings occur when people touch the jellyfish because these magnificent marine creatures do not attack on purpose. We hope your child enjoyed learning these unique facts about jellyfish!

Previous article « What is Love for You? – A Poem
Next article How to Set a Table – A Guide for Formal & Informal Settings »