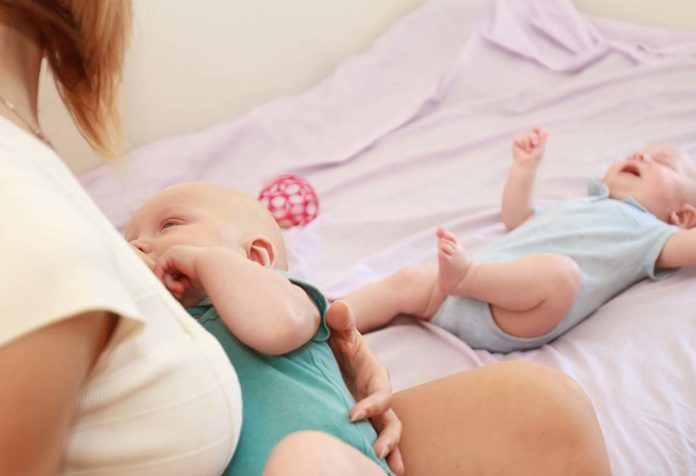 My roller-coaster journey started half an hour after I delivered the twin boys. The doctor advised feeding both simultaneously. As I breastfed them and felt their touch for the first time, all my pains and anxieties vanished in thin air. While the younger one fed for a few minutes, the elder one initially showed some resistance.

After 10 minutes, the doctor again asked me to breastfeed my kids. Again, the elder one resisted and was not feeding well. All nurses tried comforting the kid and helping him feed but in vain. I called him lovingly and caressed his soft, little hands. As I called, he turned towards me with surprise and started to take milk. I was relieved as both of them started to take an equal share. Since the beast milk was not enough for the two of them, the doctor advised feeding them also with formula milk.

During the daytime, I was feeding them with breast milk and formula milk, alternatively. The younger one used to wake after every hour during the nights, and I had to feed him with breast milk as bottle milk kept him awake. He would sleep if fed with breastmilk, or I had to cradle him for hours before he would sleep. However, my elder son woke once every 4 to 5 hours. Unfortunately, by that time, the breast milk used to be consumed by my younger one, and I had to feed him with formula milk.

The doctor advised me to remain calm and not be anxious about anything to reduce breast milk production. I learned that it is important to show love and care towards kids while feeding, which can positively impact them.

My mother prepared healthy legiyam, which helped increase the quantity of breastmilk. I  used cups to store the excess milk. As they started getting tiny teeth, they began biting things and showed less interest in breastfeeding. I started using a breast pump to pump out and store the excess milk. At night, I breastfed one kid while the other one was fed with the stored milk. After 11 months, kids stopped showing interest in breastfeeding. This was when my journey of breastfeeding ended. Though it had challenges, it was filled with beautiful moments and allowed me to bond with my little ones.

Sensitivity To Sound in a 12 Months Old

Why Dads Should Help in Taking Care of the Baby

When Baby Envy Keeps you From Being a Good Friend