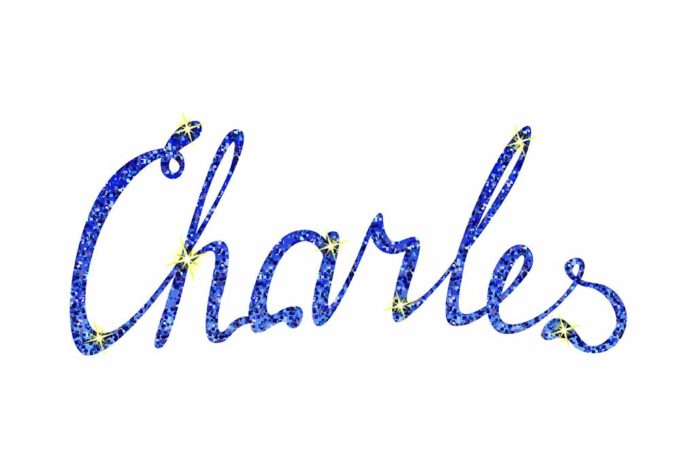 Derived from the Germanic or French name Karl, Charles means “freeman” or ‘full-grown man’ or ‘peasant.’ Starting initially as Charlemagne, Charles has been shortened to form Charles. Feminine variations of Charles can be Carla, Charlotte, Charlie, and Carlotta.

What Does Charles Mean?

Originating from the Old English word “ceorl,” Charles means the “free man.” Ceorl is a word that distinguishes a free person from a bondsman or slave (thew) and a noble person (eorl). As per an alternative theory, the meaning of Charles is ‘army’ or ‘warrior’ derived from the common Germanic name hari.

The unique sound of Charles doesn’t make it common across the Top 100, which sets little Charles apart from his classmates. Most suitable for children wise beyond his years, Charles is a stately pick with old-soul vibes. Popular throughout history, this royal name has been borne by around ten kings of France and kings of Naples, Hungary, Sardinia, and Wurttemberg. Mary, Queen of Scots (1542-87), introduced this name to Great Britain, naming her son Charles James (1566-1625), whose son and grandson ruled as King Charles boosting the popularity of the name.

Charles has been translated into many different languages and is a preferred baby name for parents globally. The following list is of other spellings for Charles and Charles name variations will certainly steal the limelight.

How Popular Is the Name Charles?

Charles is a popular name for boys in the US for over a century. It featured in the top 10 boy names from the late 1800s. In 1995, it dropped to No. 11. Even after the Charles popularity index dipped in the second half of the twentieth century, Charles was still one of America’s top 100 boy names. However, even at its lowest point at No. 63 in 2010, the Charles baby name ranking was still one of America’s top 100 boy names. In the past decade, Charles has rejoined the top 50 ranking as the No. 46 name for boys in the US. Charles Dickens, Charlie Chaplin, Charles Bronson, and the Prince of Wales and kings in France, Spain, England, Portugal, and Hungary have popularized this name over the past few years. It has also been chosen by Jodie Foster and Russell Crowe for their sons, as well.

Interest in Charles – US

The Popularity of the name Charles

Interest for the name Charles has been seen to be highest in the United States in the past 10 years, followed by France, the United Kingdom, Canada, and Australia that have found a place in the top five positions. As the meaning of this name suggests freedom from bonded labor and oppression, which upholds Americans’ belief in liberty, Charles as a name has been widely appreciated in the US.

Search trends of Charles – US

Among the sub-regions in the US, maximum searches for the name Charles have been registered in Louisiana, Missouri, West Virginia, Maryland, and Illinois over the last 10 years.

Middle Names That Go With Charles

Middle names are given to add an extra zing and make all the difference to a child’s first name. The following are the best double names with Charles that will make great name combinations for your children:

Sometimes, people name their children after a famous personality, perhaps hoping that by giving them this name, they’ll inherit some of the best characteristics of said person and set future goals. Here is a list of some of the most famous people named Charles who have become notable personalities in their various fields of work:

Baby names like Charles can have certain identical names that radiate a similar, if not the same, energy. Family names for Charles are normally adopted adhering to the lineage and can be adapted accordingly. These are some of the other names for Charles that you may be drawn to adopt for your child.

Names that rhyme with Charles is lyrical and expressive. The following are some suggestions for names that sound like Charles to generate interest.

Sibling names can be selected to bind brothers and sisters together according to a common theme or personality traits. These are some of the best sibling names that go with Charles to make the ideal choice for your little munchkin.

Loved ones use nicknames as a show of affection and endearment. The following is a list of nicknames for Charles that can be used for your kid to create unforgettable memories of childhood.

Charles is primarily a traditional, masculine name that never seems to go out of style. This traditional name among modern monikers has stood the test of time with good reason, having a posh air to him that reeks of success. Even after enjoying years of popularity, Charles hardly seems outdated and cements himself as a classic for new-age parents.

Getting Kids To Talk To You

5 Fun Ideas To Teach Kids To Rhyme Words and Sounds

UTI (Urinary Tract Infection) While Trying to Get Pregnant