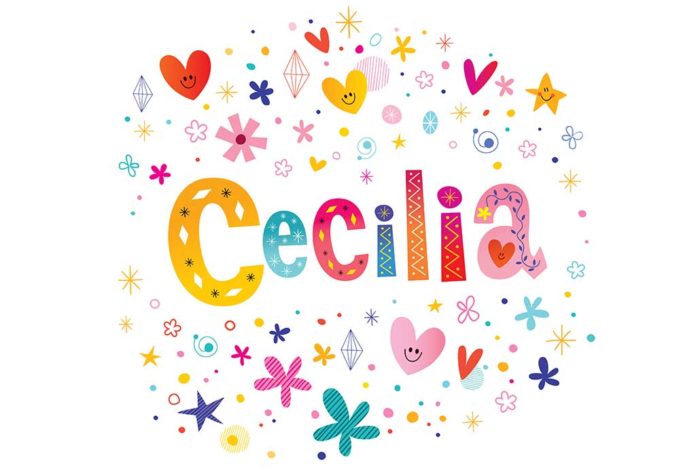 Cecilia is a female version of the name Cecil, derived from a Roman clan name Caecilius related to the Latin ‘caecus,’ meaning “blind.” The ancestors of the ancient Caecilius family were from a Roman mythological figure, Caeculus, known as ‘little blind boy,’ and the son of Vulcan, the God of fire. This name grew in popularity among Christian parents who named their daughters Cecilia to honor St. Cecilia during the Middle Ages. The name was primarily used in the Middle Ages to pay homage to the 2nd century Saint Cecilia. The Normans brought the name to England, where it was spelled as Cecily.

What Does Cecilia Mean?

Cecelia, as a girl’s name, is of Latin or Old Welsh origin. Derived from the Latin name Caecilia, Cecelia is a female form of Caecilius, which comes from the Latin ‘caecus.’ The meaning of Cecelia is ‘blind’ or ‘sixth.’ Caecilius is an old Roman family name that has its root in the Latin Caecus, meaning ‘dim sighted.’ The meaning of Cecilia has a strong association with music, thanks to the patron saint who helped to popularize this name.

The personal name Cecilia was mainly given to Roman women who belonged to the plebian clan of the Caecilii. It developed as a byname of the Roman plebian family, dating back to the 5th century BC. The Latinate form Cecilia came to be used only in the 18th century. Cecilia was the name of a 3rd century Christian who founded a church in the Trastevere section of Rome. Later in the 6th century, a biography on her life was written after being venerated as a martyr. The martyred Saint Cecilia was designated as the patron of musicians, as she was believed to have sung directly to God.

Cecilia’s name variations reflect differences in pronunciation between one region and another. Some other spellings for Cecilia that may help you discover a new favorite:

How Popular Is the Name Cecilia?

Since 1880, Cecilia has been used in the United States, with over 1,00,626 girls named the same in the past 200 years. The Cecilia popularity ranking among baby names began to rise in 1891 when its usage went up by 139.91%, with around 121 babies named Cecilia in the USA. In 2012, 1,453 people in the US were named Cecilia, which is the maximum to date. According to Social Security Administration data, the Cecilia baby name ranking has slowly risen to its peak at 147 in 2020, thereby breaking into the top 150 popular names for girls for the first time. Cecilia gained popularity after appearing in Charles Dicken’s novel Hard Times. The name also features in the novel Atonement and The Virgin Suicides, the Hunger Games series, and the Simon & Garfunkel song.

Search trends data reflects an incredible interest for Cecilia, recording a popularity score of over 35 for the last seven years reaching 100 in November 2017. The lowest value recorded in the popularity index was at 31 in June 2021.

Interest in Cecilia – US

Cecilia’s search trends have recorded consistent search popularity of over 70 for seven years, reaching 100 in September 2015. The lowest search value recorded on the popularity scale was 60 in April 2020.

The Popularity of the Name Cecilia

Search trends reflect the highest interest for Cecilia in Sweden in the last ten years, followed by Chile, Uruguay, Argentina, and Italy. With the adoption of Latin names by the Catholic clergy in the 15th century and scholarly publications in Latin, Cecilia became a widely used name in Sweden over the years.

Search trends of Cecilia – US

Among the sub-regions of the US, Louisiana leads in terms of the most searched city over the last ten years. Nebraska, Kentucky, Texas, and California make it to the top 5 cities of the US, where search trends for Cecilia have been recorded the highest.

Middle Names That Go With Cecilia

A middle name can be a pleasant insertion between your first name and last name choice. The double names with Cecilia that make an adorable combo are:

Celebrities make a profound impact on popular imagination by constantly grabbing the headlines. Some famous people called Cecilia may be worthy enough to inspire your baby name selection process.

Baby names like Cecilia are phonetic substitutes for the original name. Family names for Cecilia may provide a sense of belonging to a family unit. Some other names for Cecilia that may be trendier versions of the name:

Names that rhyme with Cecilia has a cohesive appeal and evoke their meaning more poetically. Here are some names that can be creatively matched to the sound of Cecilia:

Sibling names engender camaraderie between them. Some suitable sibling names for Cecilia that ensure the names of all your children are coordinated in style:

Here are some of the nicknames for the name Cecilia that may allow an emotional connection and accessibility than the more formal version of the name:

Most bearers of this classic name are obligated to uphold justice and truth very high as its meaning correctly suggests being ‘blind.’ Despite the evolution of prominent variations of Cecilia, Cecelia has maintained a modest level of popularity among parents who would love their daughter to develop these virtuous qualities in life.

How to Night Wean a Baby

Tools That Toddlers Love To Play With

My Breastfeeding Experience – Some Challenges and a Lot to Embrace!