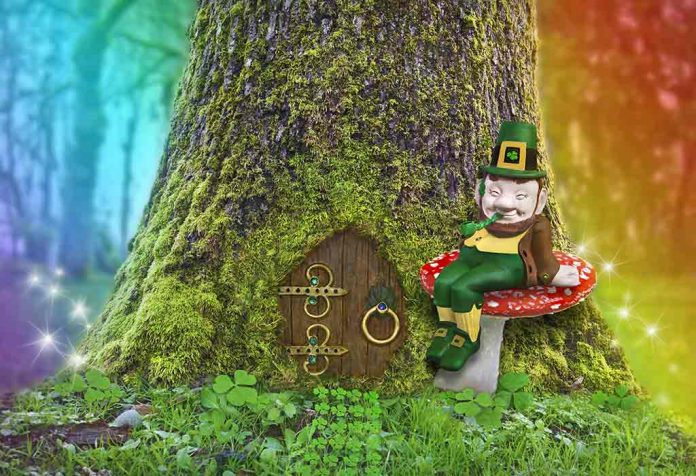 Leprechaun stories are a part of the rich heritage of Irish children’s literature and provide both a window into other cultures and a mirror to reflect different aspects of their own culture.

Leprechauns are fairy-like supernatural beings in Irish folklore and are usually depicted as short bearded men dressed in a green coat and a hat, noted as mischief mongers. The Anglo-Irish word leprechaun has been derived from Old Irish luchorpán, meaning “small body.” In later times, they have been portrayed as shoemakers hiding a pot of gold at the end of the rainbow or in some Irish countryside. According to legend, the leprechaun should give away this treasure to anyone who captures him. Still, he actually tricks that person and vanishes into the forest, taking the wealth with him. The leprechaun origin story can be as interesting as their antics. These small creatures are believed to have first emerged in the 8th-century when legends about water-spirits began circulating among the Celts. They usually merged with a household fairy and developed a penchant for drinking. These tiny entities became prominent in later Irish folklore, but scary leprechaun stories describe them as murderous kidnappers or tricky humanoids who could turn dangerous if not treated with respect. In present-day American culture, they have been popularised as jolly itinerant elves who are more of an ethnic stereotype that bears little resemblance to the characters as depicted in Irish folklores. Apart from being portrayed in 20th-century films, television cartoons, and advertising, Leprechauns are often associated with St. Patrick’s Day in America, America through their green color and shamrocks. Leprechaun stories have been passed on from one generation to the other as old Irish tales considered their existence to be real and were first spotted back in the 700s. Still, these mythical creatures might keep you guessing if they actually exist in reality.

Choose any of the leprechaun stories for preschoolers that would entertain the kids and transport them into a magical world of the Leprechauns.

Clogs are funny little things, cute and comfortable. This was precisely why Sarah loved her pair of clogs, with their clickety-clackety wooden heels. They had a leather top that opened up at the back for her to put her feet in through. Sarah’s mother insisted she take off her clogs after playing outside and after returning from school. So Sarah obeyed and took them off by the door and slipped them back on when she went out. One day, she noticed something curious: the wooden heels of her clogs were all worn down! She couldn’t understand how it could’ve happened.

“Look at my shoes, Mum, there’s something wrong with them!” said Sarah.

“It looks like they’ve worn out from constant use. Never mind, we’ll get you a new pair after school.”

“There must be a leprechaun who danced a jig all night long in your shoes!” laughed Sarah’s grandma.

Sometime later, Sarah wore her old shoes, which were not as comfortable as the clogs had been. After school, she kicked the shoes off by the door and glared at them. Later that evening, Sarah and her mother bought a new pair of clogs, put them neatly beside the door, and went to bed. The following morning, Sarah rushed downstairs to put her new shoes on but was surprised to find the wooden heels worn out!

“Mum, did you put my old clogs back out? Where are the new ones?” asked Sarah showing them to her mum.

“They’re by the door…oh! How did they get worn out again?” Mum exclaimed.

“I told you…leprechauns love clogs and dancing, and they’ve been dancing a jig in your shoes!” smiled Sarah’s grandma.

Since then, Sarah has kept her shoes in the closet and wonders whether the leprechauns would be able to dance in them now!

2. The Night Before St. Patrick’s Day

On the night before St. Patrick’s Day, everyone was asleep at home except Tim and Maureen. They were up late, carefully laying out traps of gold charms and rings in the hopes of catching a leprechaun…and his big pot of gold coins just as the legend goes. They went back to bed, dreaming of shiny gold coins. The following day, Dad woke them up by playing his old bagpipes.

They all sung old Irish songs and ate a breakfast of Mum’s green eggs. Suddenly, they heard a crash come from their bedroom. The kids ran down the hallway to find their room in shambles.

“What a mess! I bet the leprechaun’s here,” said Maureen.

“Be quiet, and make sure to hold his stare, for if you blink, he’ll vanish,” Tim whispered.

Just then, they heard a giggle. Searching around for the little Irishman, they followed the muddy trails around the room and past the closet door. And there they found a real-life leprechaun, stuck in a trap and holding a golden trinket! He had a twinkle in his eyes and wore fairy-like green clothes on his tiny body. The children looked him straight in the eyes and stared in surprise.

“Where’s the gold? And no tricks or lies!” said Maureen firmly.

“I buried it under a smooth, hard rock. It’s marked with a green X in your backyard!” said the leprechaun, the twinkle not disappearing from his bright eyes.

Eagerly, Tim and Maureen grabbed their shovels and picks and ran outside into the backyard. They looked all over for the X-marked rock, only to realize it was a trick!

“I fooled you! Happy St. Patrick’s, and better luck next year!” laughed the leprechaun as he disappeared into thin air.

Once upon a time, on a hot, sunny day, a farmer caught a leprechaun from under the leaves of one of his philodendron plants. The leprechaun, who had hidden in the shade of the leaves to escape the heat, pleaded with the farmer to let him go. The farmer then looked closer at the leprechaun.

“Are you a leprechaun, trespasser?” asked the farmer, squinting in the sunlight.

“Y-yes, I am indeed a leprechaun, Mr. Farmer. Please set me free,” begged the leprechaun.

“Only if you tell me where your gold is hidden!” said the farmer greedily.

The leprechaun was desperate to escape, and so he revealed the exact location of his treasure. The farmer ran over to the strawberry bush where the leprechaun said the gold was. However, he had to go home and get his shovel to dig the treasure out, and this bush looked like hundreds of the other strawberry bushes he had. So, to mark the bush with the treasure, he took out a red sock from his overalls and tied it tightly to the bush.

“Please, let me go! You know the location of the gold now. You won’t be needing my help!” cried the leprechaun.

“Fine, but you have to promise not to remove the red sock from the bush while I’m gone,” said the farmer.

“I promise!” said the leprechaun, happy to be free again.

So, the farmer went home, got his shovel, and came back to the farm delighted at the thought of getting the wealth. As he reached the spot, he saw a shocking sight before him. All of the strawberry bushes had a red sock tied around them! No matter how hard he tried, he couldn’t remember which bush had the gold under it. The farmer sadly thought to himself, “Now I’ve lost my sock and the gold,” and returned home dejected.

Reading bedtime stories is a great source of relaxation for kids as it allows them to forget the stresses and indulge in fantasy. The beauty of these Leprechaun stories is that they can be super realistic or incredibly whimsical. By introducing new ideas and complex emotions, stories help kids cope with their feelings and develop their imagination. Besides building vocabulary and learning about concepts and everyday tasks, stories can also enhance confidence and self-esteem by showing children where they fit in this world full of diverse people. Hence, children of all ages should be encouraged to read as it forms a vital part of their growing and development process.

How to Get Curry Stains Out From Fabric

Pregnant & New Moms – Avoid These 4 Ingredients In Your Shampoo!

What To Expect At Week 33