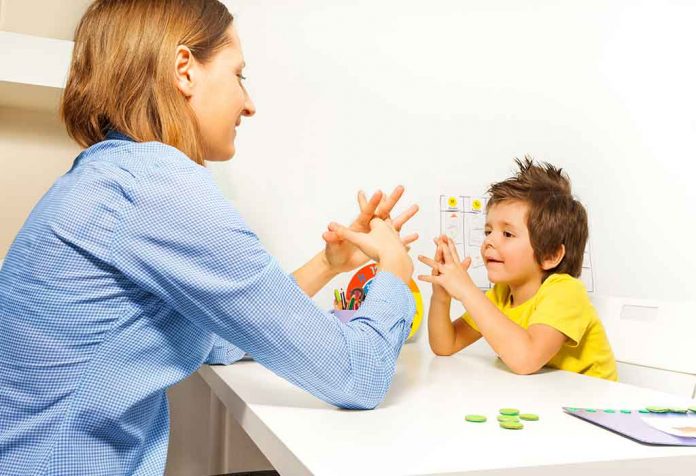 Whether you are planning to teach toddlers and preschoolers in a small group or large group, or independently and one-on-one, finger plays offer a valuable learning experience in all cases. If you are looking for some fun finger play ideas, we recommend reading through this post!

Finger plays are not only entertaining, they are engaging activities for young, growing minds. Here are some creative and fun finger play ideas for kids!

This is one of the most entertaining finger play songs for young kids. Raise all the fingers of one hand, and one finger of the other hand. Start singing this song:

But only four little ducks came back! (fold down one finger)

Repeat this song, and keep missing one duck and folding down one finger every time. In the end, send the Mumma Duck to fetch all the little ducks!

This is an amazing finger play for toddlers. Hold up all the fingers of one hand, and sing:

Sat on a speckled log (place the outstretched fingers on the other hand, which is placed horizontally to resemble a log)

One jumped into the pool (raise 1 finger)

Where it was nice and cool (make a swimming gesture)

Keep repeating until no frogs remain on the log!

3. Here Is the Beehive

You can try this adorable finger play song with kindergarteners and preschoolers!

Here is the beehive (make a fist with one hand)

Where are the bees?

Hiding inside where nobody sees!

Watch them come creeping out of the hive

One, two, three, four, five (raise one finger from the fist with each number)

BUZZ-ZZZ! (make the buzzing sound as you wiggle your five raised fingers)

Another exciting finger play for preschoolers, you can make this activity more fun by assigning the kids’ names to each finger. Start by holding up all the five fingers of one hand. Keep putting one finger down every time an umbrella is taken.

Five umbrellas, not one more

Dad took one, then there were four.

Four umbrellas, pretty as can be.

Sister took one, now there are three.

Mum took one, then there were two.

Two umbrellas, that’s all I see.

Brother took one, and left one for me.

One of the classic finger play rhymes, young kids will enjoy this activity to the hilt!

The itsy-bitsy spider climbed up the waterspout. (use your fingers to make climbing movements)

Down came the rain and washed the spider out. (Imitate the action of rain by wiggling your fingers)

Out came the sun and dried up all the rain. (Stretch your arms over your head to form the shape of the sun)

And the itsy-bitsy spider climbed up the spout again. (use your fingers to make climbing movements)

6. 5 Cheeky Monkeys Jumping on the Bed

Kids love activities or songs with animals in it, and this goofy song will amuse them to the core!

Five cheeky monkeys jumping on the bed (start by holding up five fingers, and then imitate jumping movements)

One fell off and bumped his head (rub your head)

Mama called the doctor, and the doctor said (gesture with your fingers as if making a phone call)

Repeat until no monkey remains on the bed!

This adorable finger play will leave the kiddos asking for more! Start by placing one hand over another, and extend your thumbs outwards.

His name is Tiny Tim!

To see if he could swim!

And ate up all the soap. (act as if eating or gobbling something)

Now he has a bubble in the middle of his throat! (stroke the throat with both the hands)

This one is a hilarious and exciting finger play for young kids!

Five little monkeys swinging in a tree (Raise one arm, and imitate the gesture of a hanging monkey’s tail with it)

Along comes Mr. Alligator, quiet as can be. (Bring your palms together and make gentle swimming motions)

And SNAPS one monkey right out of that tree. (Use both hands to make a clap sound as you imitate the alligator’s jaws by joining both the palms)

Repeat until there are no more monkeys swinging in the tree!

This numbers song can be made more fun and exciting by adding some finger play to it!

Once I caught a fish alive (hold one finger up)

Then I let it go again.

Why did I let it go? (make a gesture as if asking a question)

Because it bit my finger so.

Which finger did it bite? (again, make a gesture as if asking a question)

This little finger on my right. (hold and point out the pinky finger of the right hand)

If you are looking for finger plays with hand motions, this one is surely tops the list!

One, two, buckle my shoe (hold up two fingers up as you count, and then make tying actions using your hands)

Three, four, knock on the door (hold up two more fingers of the same hand, and make a knocking gesture by folding the index finger)

Five, six, pick up sticks (hold up the last finger of one hand, and one finger of the other hand, and then make movements as if you are picking up sticks)

Seven, eight, lay them straight (hold up two more fingers of the other hand, and make gestures as if you are laying the sticks down)

Nine, ten, a big fat hen! (hold up the last two fingers of the other hand, and then fold both your arms to make a flapping gesture)

This fun finger play song can go on and on and so will the fun!

Five jellyfish, sitting on a rock.

One jumped off! Splash! (fold down one finger)

Repeat this until all the jellyfish have jumped off, and you have made a fist. Next, sing:

No jellyfish, sitting on a rock.

One jumped up! Hooray! (from the fist, raise one finger)

Repeat until all the jellyfish have jumped up, and all the fingers are held up again!

Kids will have oodles of fun as they move their little fingers and sing along to this adorable play!

Big and round, with a cherry on the top (make a big circular shape with both arms)

Along came a little boy (or you can use any name) with a penny one day,

Bought a currant bun, and took it away (fold down one finger).

(Keep singing, counting, and folding down fingers until there are no buns left in the shop).

This is one of the most engaging finger plays for kids that teaches them about body parts.

Two little ears to hear a sound (point to the ears)

Yum, yum, yum! (rub your belly with both hands, and sway your body and head sideways)

This is a cute and sweet finger play for young kids!

All of a sudden, one went BANG! (clap your hands with a loud bang)

All of a sudden, one went BANG!

Repeat until no more sausages are left!

This is a simple yet fun finger play song for toddlers!

There were ten in the bed, (hold up all your fingers)

And the little one said, ‘Roll over, roll over!’

So they all rolled over, and one fell out. (fold down one finger)

There were nine in the bed…

Repeat, roll, and fold down the fingers till everyone rolls over the bed!

These fun and creative finger plays will engage your kids and aid their motor and cognitive growth and development!

Teaching Toddlers to Draw a Circle

Best Homemade Weed Killers to Use in Your Garden

Indian Rotis (Chapatis) That You Will Relish Till the Last Bite