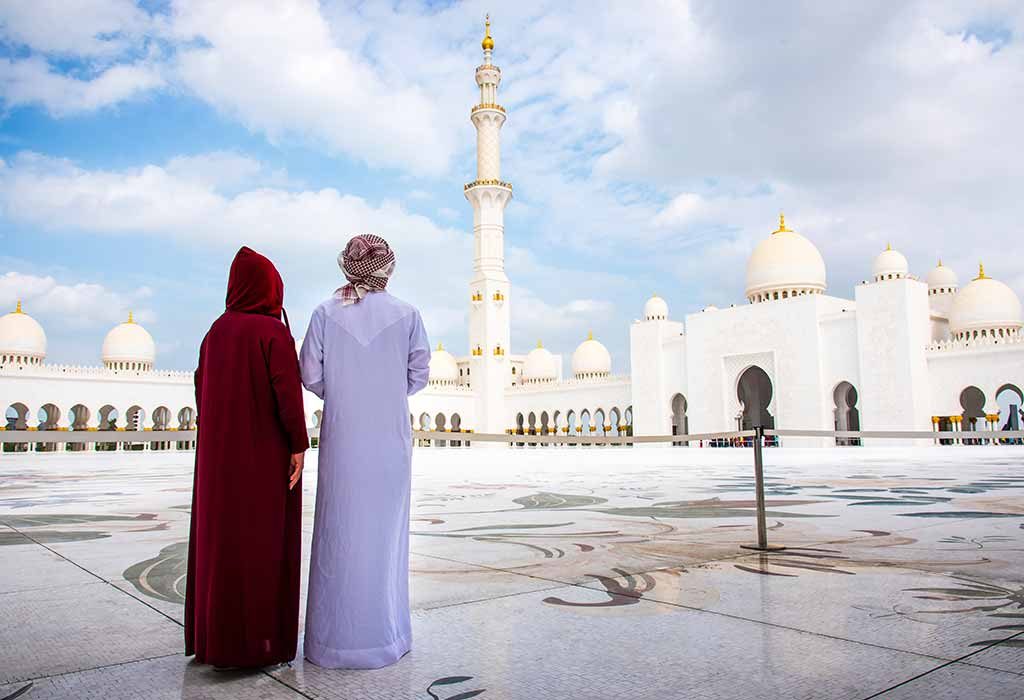 Arabic is a centuries-old language, and its traditions and culture are just awe-inspiring. The culture and regional traditions have influenced people and their family names. Some people follow a habitational name as a surname, while some use their occupations as their last name. Whether you are browsing Arabic family names out of curiosity or are interested to learn what your family name means, you will most likely find it in this article. We compiled a list of extensive Arabic last names and meanings from their popularity level to their commonality level and included them here. Here, we have a list of the 100 most common Arabic last names and their meanings.

Here are some of the most popular Middle Eastern last names:

Abadi means “eternal” and the Arabs who carry this surname today are the descendants of the Abbad tribe.

Abboud is a commonly known Arabic surname, which means “devoted worshipper”. Muslims and Christian Arabs also use this last name.

It means “Servant of God” and is considered to be a revered name. “Allah” is the name of the God of Islam, while “Abd” is the word for servant.

This means “praised one” or sometimes “commendable”, and when used as a surname, can be “Al Ahmad” which is “the praised one”.

The Fourth Caliph in Islam was named Ali. This name is considered a strong family name. It means “champion”, “elevated”, “sublime” or “high”.

Meaning “faithful” or “trustworthy”, this Persian/Arab name is also connected with Prophet Muhammad from Islam.

Ayad is a strong surname that means “blessings” and “power”.

Meaning “the dearest one”, you can sometimes find this surname with the prefix “Al”, making it Al Aziz. The name was often given to those who were servants of God.

Baba is a diminutive of the Arabic word Abu, which means “father”.

This Arab surname is most common amongst the Bedouin tribes, who were referred to as “desert dwellers”. Their ancestors were once nomads in the desert.

The name means “Bestowed by God”. It is a beautiful family name that was taken by those devout to God. It finds its origins in Baghdad, Iraq.

Also used with the prefix Al, Bakir is known to mean “early” or “dawn” or “early in the morning”.

This name means “one who brings glad tidings” and could have originated with messengers.

Meaning “the victorious one”, Bilal is a well-known family name. It also means “flow of water”.

This name means “knowledgeable one”, which was also one of the qualities of Prophet Muhammed. Another meaning for the name is “one with proof”.

Cham is a habitational name for people from Damascus. It is also an Arabic name for Syria.

This is another name that was given to those who lived nomadic lives. The name means “to explore”, “to roam”, or “to wander”.

Commonly known as the Arabic version of the name David, this name means “a beloved friend”.

Also known as Ubayd, this name is one for the family who was devoted to God. It means “worshipper of God”.

Essa is a variant of the Arabic name Issa which basically is the Arabic form of Hebrew Yeshua or Jesus in Greek.

This name means “someone gracious” as well as “virtue”.

This surname is mentioned as Fahm in the Holy Quran, where it means “understanding”. This surname also means “intelligent” and “perspective”.

The name means “ruler” or “the generous one”.

The name Fakhoury is derived from the name Fakhri, which means “proud” or “something associated with a noble cause”.

Farhat is a surname that originates in Persia. It means “status” and “splendour”.

It is believed that the surname Farouq is held by those whose ancestor is Umar ib’n al-Khattab. He was the fourth Caliph of Islam. The name means “one who differentiates right from wrong”.

This is a Persian name and is held by those who originate from there. The name means “the Persian”.

Often used with Al, Al-Fasih means “the eloquent one”.

This surname means “the unique one”.

Originating from Libya, this surname means “the thrower” or “the archer”. It was first used by the Libyan tribe, Qadhadhfa.

Ganem is a Muslim name derived from the Arabic word Ghanem which means “prosperous” and “successful”. The name is also prevalent in Turkey.

This surname was very common amongst the mystics. It means “saint”, “philosopher”, or “mystic”.

The surname originated with the people who came from Gaza in Palestine.

This name was common amongst those who were devoted to God. It means “young servant of God”.

Meaning “beloved”, this name is usually used as a title of honour as well as a surname.

Hadad in Arabic refers to “blacksmith”.

This particular name is based on one of the names of the Islamic God, Allah. This name is Hidayah. It means “guide to righteousness”.

An Arab name that means “iron”, it is sometimes used with the prefix, Al.

This Arab surname means “the protector” or the “guardian”.

This is a name that was given to those families who were physicians or doctors. The name means “the doctor” or “the healer”.

Hariri means “silk”. It was given to those families who were in the trade or manufacturing business of silk.

The name means “beautiful” and “to be good”. One of the grandsons of Prophet Mohammed was named Hasan. The name can be written with the prefix “Al,” making the name Al-Hasan.

The name means “determined” or “decisive”, and is a common surname in the Arab world.

This surname refers to those who originate from Hejaz, Saudi Arabia.

Another grandson of Prophet Muhammed was named Hussein. The surname means “handsome”.

This is the name given to Abraham in the Quran. It means “the exalted father”.

A very common name that means “strong one” in the Arabic language. There are many scholars, politicians and other intellectuals who share this name.

The name means “one who is knowledgeable”. A few other meanings of this name include “constant learning” and “awareness”.

Isa was considered to be a prophet in Islam. Isa is said to mean “iron” or “ice”.

This name is one that has many meanings. Variations of the meaning include “the flawless one”, “the chaste one”, “the pure one”, and “the innocent one”.

The name Jabal is closely associated with mountains, and it means “great height”.

This name means “comforter”, and can also be used with the prefix in front to make it Al Jaber.

This name has many wonderful meanings. It means “strength”, “power”, “might” “superiority” and “glory.” It is often used to describe Allah’s greatness in the Quran.

The meaning of Jameel are variants of good looking. “Beautiful” and “handsome” are common meanings of this name.

This surname often refers to “Jewellery” or other forms of precious stones and precious metals. The name also means “gold”.

This surname means “independence” or “self-confidence”.

This surname was held by very capable families. The name itself means “capable”, “ambitious” and “powerful”.

Kanaan is a prominent Arabic surname referring to the land of Canaan in the Bible.

Held by Arab nobility, the name means “noble” and is one of Allah’s 99 names.

This is a surname that signifies those who are observant and adventurous. The name means “one who discovers” and “pioneer”.

The name basically means “one who has control over anger”.

This surname is one that marks silence and peace. The meaning of the name is “born at nightfall”.

The name means “one who stands out”.

This surname was given to those who were known for being trustworthy and honest.

The name comes from the name of the Prophet of Islam, Muhammed. The name means “to be worthy of praise”.

This is a very common Arab surname and was derived from the noble Muhammed.

The name is derived from Marou, a stone used to start campfires in the olden days. The name denotes “strength” and “leadership”.

Referring to one who counsels or gives legal advice, this was a name that was given to families who indulged in this field of work.

The name is given to those families who speak the language of the Arab-Berber tribes. This language is called Magrabi.

This is another noble surname that was derived from the Prophet of Islam, Muhammed. The meaning of the name is “the chosen one”.

This honourable name means “to be aware” and “vigilant”.

Known for devotion to Allah, Muhammed was given this name. It means “the closest friend”.

The name means “strong tree” and is a popular surname in the middle east.

This name refers to those who come from the Najd region in Arabia.

Those with an ancestral line of carpenters often have the surname Al-Najjar. It means “the carpenter”.

The meaning of this surname is “victory”.

The name means “divine” and sometimes also “light”. It is a common surname given to families who are deeply devoted to God.

This surname is quite a common one in the Arab world. It means “servant devoted to God”.

The name means “one who distributes”.

Quraishi is an Arabic variant of the name Qureshi. Qureshi comes from the name of a tribe Quraish, which was a renowned tribe in Mecca at the time of the birth of the Prophet Muhammad.

Those who are the descendants of those from the Quraish tribe in Makkah have this surname.

This surname means “follower of God”.

This surname means “forgiving” or “merciful”.

This last name means “respect”. It is also the name of the seventh month in the calendar.

The meaning of the surname is “to be alive”. It is also the name of the holy month in Islam.

This last name means “quiet” or “sign” that is given by God.

The surname means “truth” or “one who points in the right direction”.

The surname was given mostly to Muslims belonging to the Shia denomination. The meaning of the name is “approval of Allah”.

The meaning of this last name in Arabic is “broad-chested” or “courage”.

The meaning of the name is “lord” or “master”.

The meaning of this name is “devoted companion” and “bright shining star”.

The name means “one who is cleaver” or “intelligent”.

This is the most common of the royal Arabic last names. It means “ruler”.

This name has the meaning “devoted student” and “one who seeks knowledge”.

The meaning of this name is “chance” or “opportunity”.

Toma is a modern-sounding Arabic last name derived from the Aramaic word Thomas which means “twin”.

The number one in Arabic is Wahed. It also has the meaning “the only one”.

The meaning of this name is “richness”, and it is also the name of a chapter in the Quran.

Said to be a variation of Joseph, it means “God will increase”.

This name has the meaning “abundance”, “generous” or “growth”.

We hope that this list of names has helped you either with your curiosity or with finding out what your name means.