Baby’s Positions in the Womb and How to Discover Them

Baby’s Positions in the Womb and How to Discover Them 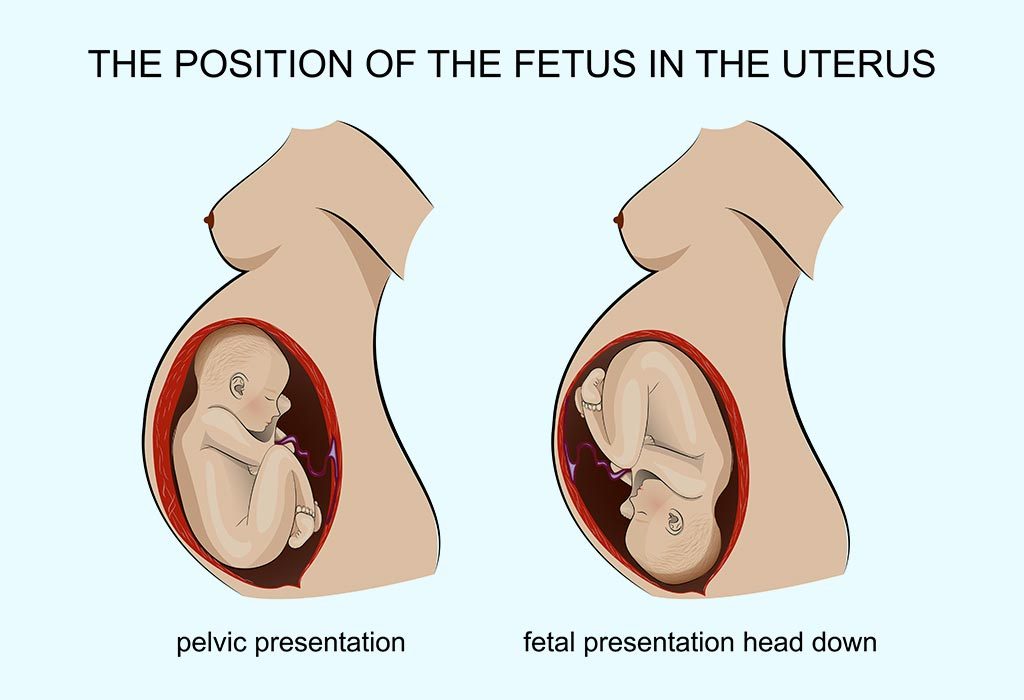 During pregnancy, you may have seen a number of videos that show the baby inside the womb. You may have seen your own baby inside your womb during a sonography and wondered about the position of the baby during delivery. Throughout the entire duration of pregnancy, babies keep changing their position and toss and turn inside the womb by themselves.

The position of the baby during labour could be different from what you might have observed during pregnancy. Just prior to your due date, the baby will descend lower into your pelvis and could take one of the four positions mentioned below.

Termed as ideal for delivery, this is where the baby’s head points to the birthing canal and the chin is tucked into the chest, facing the mother’s back. Attained generally around the 32–36 weeks of pregnancy, the baby will stay in the same position until delivery. Sometimes, the chin may be tucked outward instead of towards the chest which the doctor can feel on inspection. In certain cases, the arms could also be along the head pointing to the canal. This position is quite similar to the previous position. The only difference is that the baby is facing the mother’s stomach in this case. This is also called the face-up position, since the baby’s face would be seen first on delivery, instead of the back of its head. Most babies turn to the anterior position prior to delivery, but other babies do not. In such cases, labour could extend for a longer duration, leading to complications or even needing a C-section. Exactly opposite to the previous two positions, this is where the baby’s buttocks are pointing to the birth canal and head points upwards. 4 out of 100 deliveries have this position. The babies legs could be folded at the knees, could be straight up touching its face, or even straight down right at the birth canal. Each of these positions carries a risk with the umbilical cord, resulting in potential damage to the baby.

In this position, the baby lies on its side inside the womb. The doctor can observe this by feeling the shoulder of the baby. This position, too, carries the risk of umbilical cord prolapse and might need C-section if the baby fails to attain an optimal position. Certain times, the baby can be rotated manually or use a vacuum to an ideal position and then proceed with natural birth. Which is the Best Position for Normal Delivery?

The best position for normal delivery relies highly on the baby’s head position during labour. With the head towards the birth canal and the back slightly facing the mother’s stomach, such a position is ideal and results in quick birth. The baby’s head puts pressure on the cervix causing it to widen. As you begin to push, the narrow portion of the baby’s head enters the canal first, pushing it further wide. Towards the end, the entire head makes its way through the pelvis and slips under your pubic bone.

What Are Station and Engagement?

Station and engagement might sound like complex terms, causing you to be more anxious. But they are merely representations of the baby’s position while you’re in labour.

Engagement is where there is activity and the baby has begun its progress through the mother’s pelvis. Mothers that are having their first babies often enter engagement a week or two prior to labour. For other mothers, engagement occurs only when labour sets in.

Flexion is a term that is rarely heard by anyone unless it is a special case of delivery. Flexion is generally to determine whether your baby has its chin touching its chest or not. Flexion means it is, whereas extension means the baby’s neck is tilted backwards. In case of a breech delivery or if you’re having twins, doctors will assess the flexion and suggest procedures accordingly.

How to Discover Your Baby’s Position?

Mothers can feel the position of their babies by themselves. It is best to avoid using fingertips and use the pad parts of your fingers to do so.

Observe them for a bunch of days or a week and get an idea if they are strong or small. Smaller movements are mostly a result of the baby’s hands, which are generally closer to their face. Stronger movements, such as kicks and pushes, are due to your baby’s feet.

Feel around for hardness that resembles a spherical round shape. If you push it gently and only the specific part moves, that’s probably the baby’s head. If instead, the entire baby seems to move inside you, then that’s possibly the baby’s buttocks.

Having found either your baby’s head or buttocks, feel around for an area that’s longer and smoother in that direction. Feel comfortable to press gently, as long as it doesn’t get uncomfortable for you. The baby’s heartbeats can be loudly heard from its back. If you can hear them at a higher position of your stomach, then your baby might be in a breech position. If they seem to emerge from below your belly button, then the baby’s head may be facing downwards.

What is Belly Mapping?

Belly mapping is a technique to envision your baby’s position before delivery. Once you’ve visited your doctor and know where your baby’s head is positioned, you can do the mapping yourself by using a marker and a baby doll. By marking the location of your baby’s head, you can trace your fingers to locate its buttocks and mark that position. Listening to the heartbeat can reveal more information and where you feel the kicks, mark them for legs. This can help you position the doll in a way that resembles your baby inside your womb.

Can You Improve Your Baby’s Position for Labour?

Your baby may not always be in the most optimal position for delivery. However, there are certain methods you can use to gently nudge your baby into the right position.

Tips to Position Your Baby During Labour or Birth

Even after it all, your baby may not be in the best position during labour. In these times, the doctor or the helpers assist you in getting the baby in the right position.

The entire process of raising a baby in the womb and delivery comes down to as simple as the baby’s position. By keeping track of it as you move later into your pregnancy, and doing certain exercises and positions to ensure optimal orientation, you can increase your chances to have quick and easy labour, with an extremely healthy baby.

Also Read: Signs of Healthy and Unhealthy Fetus in the Womb