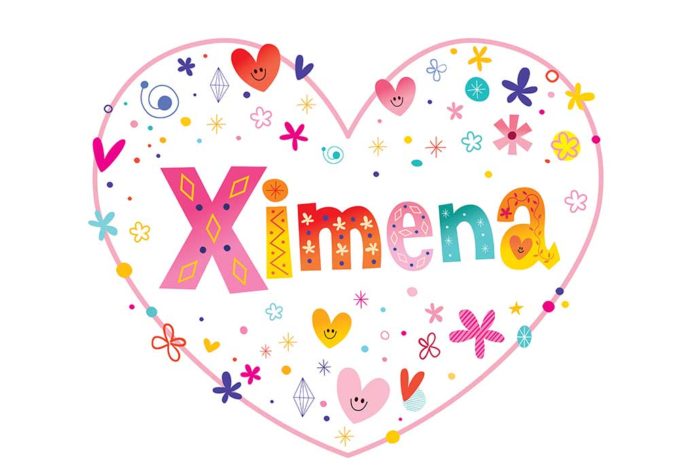 Also spelled Jimena, Ximena comes from the biblical name Simon, taken from the Greek form of Hebrew name, Shimon, which means “listener.” Ximena was the wife of El Cid Campeador, a Castilian nobleman and then military and political leader who conquered and governed the city of Valencia in the 11th century.

What Does Ximena Mean?

Derived from medieval Spanish or Basque origin, the meaning of Ximena is ‘Hearkening,’ or ‘He Has Heard.’ It might have come from the Basque word seme, meaning “son.” It is the feminine version of the Spanish name Ximeno. The meaning of Ximeno might be a perfect match for a girl who will grow up to be the true listener.

Ximena is an Old Spanish and Portuguese female version of the Hebrew Biblical name Simon or Simeon, which means ‘listener’ or ‘one who hears.’ Popular since the medieval age, Jimena has largely replaced Ximena as a more modern version. However, in modern times, the Spanish language has abandoned the X and replaced it with a J making it extremely popular in Spanish-speaking nations like Mexico. In the 11th century, the wife of the Spanish 11th-century military hero El Cid was named Ximena, who fought against the Moors and eventually recaptured the city of Valencia in Spain. She took over as ruler after his demise and ruled for a few more years until Valencia eventually fell to the Muslims. Today several well-known Spanish-speaking actresses bear the name, including Ximena Navarrete of Mexico and Ximena Herrera of Bolivia. Ximena was very popular at the beginning of the 20th century in France, although later it was popularized by the French feminist Simone de Beauvoir.

How Popular Is the Name Ximena?

Ximena debuted on the female charts of the US this century as late as 2001. According to Social Security Administration data, the Ximena popularity index has remained fairly stagnant, switching places between the top 120, 130, and 150 for the past few years without falling below the top 200 in quite some time. Currently, the Ximena baby name ranking stands at 128th spot on the baby names popularity charts in the US as of 2020. Latin celebrities like model Jimena “Ximena” Navarrete (Rosete), singer Ximena Sarinana (Rivera), actress Ximena Duque (Giraldo), actress Ximena Bensusan, and painter Ximena Armas (Fernández) share this moniker making it quite popular among new parents.

A consistent search value of over 40 has been recorded on interest for Ximena, reaching 100 in June 2015. The lowest value was recorded was at 30 in Oct 2021.

Interest in Ximena – the US

Popularity of the Name Ximena

Interest in the name Ximena has been seen to be highest in Mexico in the past ten years. Chile, Peru, Bolivia, and Uruguay have made it to the top five positions. Due to the influence of the Spanish settlement and Spanish-speaking community in Mexico, Ximena has been well received by Mexican parents.

Search Trends of Ximena – the US

Among the sub-region of the US, Texas records maximum searches for the name Ximena over the last ten years. California, Florida, Nevada, and New Mexico are the top five cities where search trends for Ximena have been registered to be the highest.

Middle Names That Go With Ximena

An interesting middle name can offer the flexibility to go wild with your choice between a formal name and a middle name. Here are some suggestions of the best double names with Ximena that may be on top of the baby-naming trend.:

Celebrity names can be emulated for your baby when you want them to become rich and famous. Here’s a list of some of the popular personalities named Ximena who have made a difference with their outstanding contributions in various fields:

Baby names like Ximena can be more straightforward to spell than the original name. Family names for Ximena may help to preserve the continuity of the family prestige. Here is an updated list of some of the other names for Ximena that may be equally smooth and stylish.

Names that rhyme with Ximena refers to phonetic similarities of the name. Here are some names that sound like Ximena that increases the probability of being chosen based on their accent and pronunciation.

Nicknames are special terms of endearment we’re best known by during our childhood and beyond. Here are some of the nicknames for the name Ximena that may never get too outdated:

Barely ten years old in the United States is Ximena, one of the few exotically Spanish names with X that makes it a unique choice. As every child is special, their arrival itself implies that God has heard our prayers when they come into our life, as the meaning of the name suggests.

Most Hilarious Weather Jokes for Kids